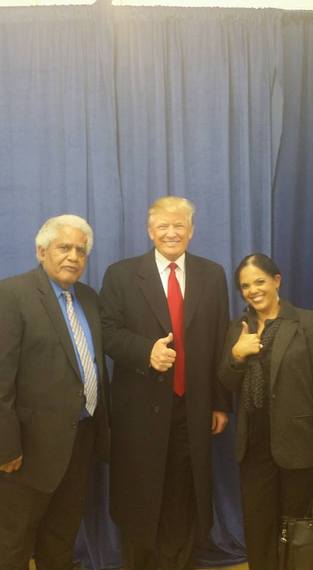 Republican presidential candidate Donald Trump met after his rally in Manassas, Virginia on Thursday with T. Milton Street Sr., a former Pennsylvania state senator who was imprisoned for 26 months after his conviction for tax evasion. His brother is former Philadelphia mayor John Street. A perennial candidate, Street received only 1% of the vote during the recent Democratic mayoral primary in Philadelphia.

Street confirmed that he secured a commitment from Trump to come to Philadelphia to meet with the African American community. Their conversation focused on black on black violence. He said, "I told Trump that I opposed the Black Lives Matter Movement. Why should the deaths of black youth only matters when a white person kills them? Where were they when 3000 black youth were killed from 2007 to 2011?"

He explained his 414 Community Movement to Trump. "I want to put boots on the ground to combat crime," said Street. "I want to hire people from the community to patrol the streets and schools. It costs $40,000 to keep someone in prison. It would be cheaper to pay them to keep the neighborhood safe."

Trump's outreach to Milton Street may seem surprising on the surface, but it may be the perfect way to change the conversation after his disastrous meeting with the African American pastors earlier in the week. Street admitted that he only got the call several hours earlier to meet with Trump.