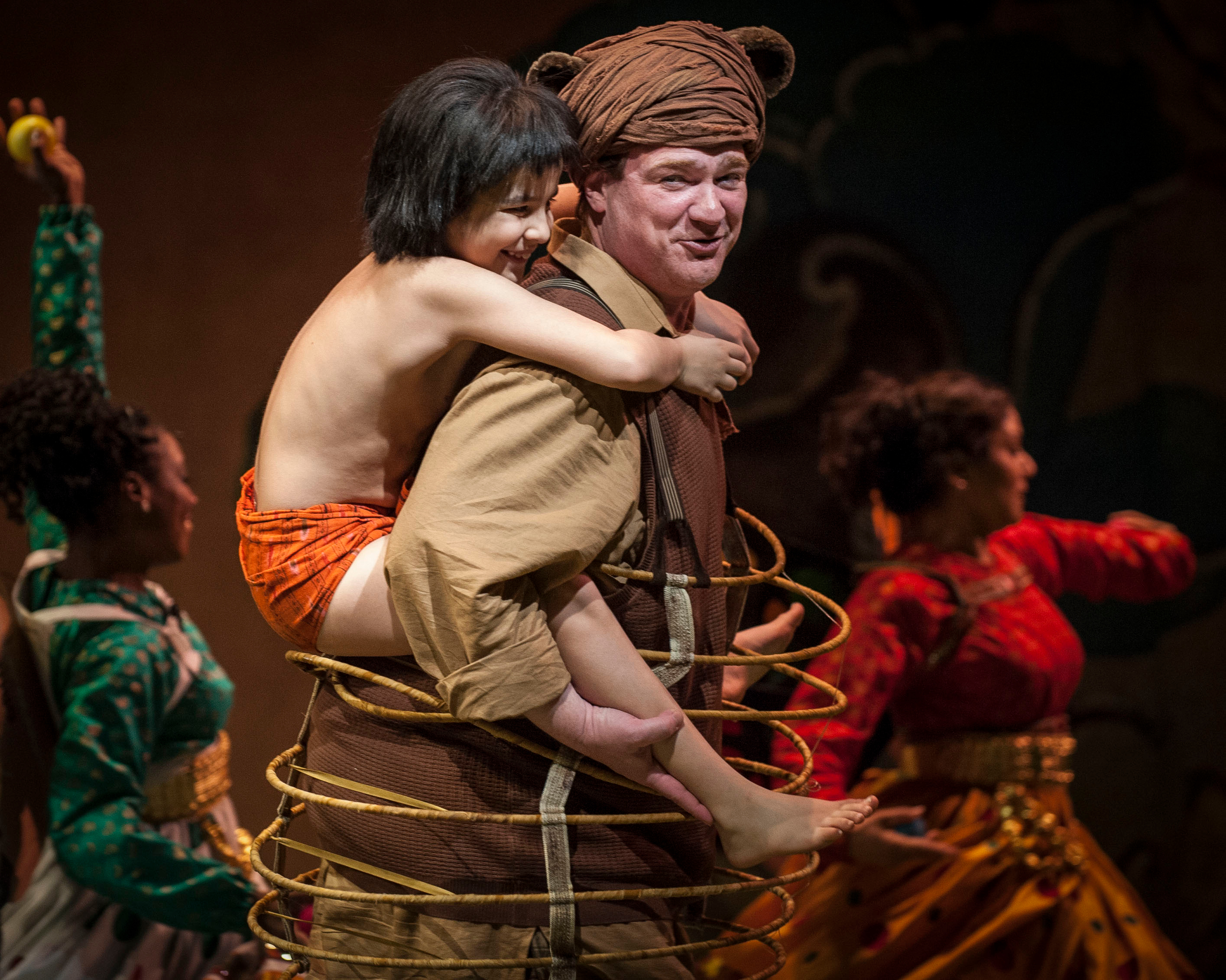 Quick: would you rather pay $115 (or $303 to a ticket broker) to see the misbegotten offspring of Walt Disney and Mary Zimmerman, or pay nothing whatsoever to see a powerhouse re-interpretation of Clifford Odets's Depression-era howl of protest? What if you factor in that the former lasts nearly forever and the latter races by in 55 minutes?

Of course, it's not a fair comparison: no one looking for sharp political commentary would be apt to choose The Jungle Book for an evening's entertainment. But plenty of people looking either for the playfulness of the Disney cartoon or the thoughtfulness of Zimmerman's earlier work would choose it, and all will be disappointed. Nothing in the evening gives the flavor of the original Rudyard Kipling stories, though that might have been expected from this director. From the first song, done with that distinctive Sherman Brothers ("Mary Poppins") bounce, India is eradicated from the production. And though choreographer Christopher Gattelli incorporates movement from Indian dance in the big numbers, its only apparent function is to make the numbers go on, and on and on.

Like its protagonist Mowgli -- a human child raised by wolves and at home in neither world -- The Jungle Book is neither here nor there. It's too long to hold a child's attention and too obvious for an adult. People who like Kipling will wonder why he keeps being interrupted by music, while people who like musicals will find the score indifferent and the blend of jazz and Indian music discordant. And for all the pre-show fuss about racism and the Raj, nothing on the stage is provocative or significant enough to justify that level of interpretation.

Even the costumes -- a reliably delightful feature of Zimmerman's productions, and Disney's, for that matter -- fall flat here. I thought Bagheera (Usman Ally, doing his best) was a monkey until the middle of Act II when he said, "I'm a panther." The tiger Shere Khan (Larry Yando, who played Scar in The Lion King and so is typecast as a homicidal feline) wears an orange costume whose red stripes and booties suggest a clown rather than a big cat. And Baloo (Kevin Carolan, the only actor in full Disney mode) looks less like a bear and more like a man mysteriously encaged in a hoop skirt. The show has just been extended through August 11 at the Goodman, 170 North Dearborn in the Loop. Miss it if you can.

Instead consider Oracle, which charges nothing for its seats, offers free beer and for the second show in a row has displayed the uncanny ability to take old rhetoric and old politics and make them new. Waiting for Lefty can be deadly: Odets liked speechifying and was big on telling the audience what to think. Somehow director Matt Foss and his ensemble have teased out of a manifesto this actual play about actual people whose suffering feels like our own. The moment in which Joe (Dylan Stuckey) woos Edna (Stephanie Polt) by leaning her against the wall and outlining her in chalk is indescribable (obviously), beautiful and erotic. We see how Joe's inability to make a living has destroyed a genuine thing: their love. By the same token, Jeremy Clark so effectively turns the corrupt union boss Fatt from Odets's cardboard villain into a believable horror that it's as if James Gandolfini were reincarnated. I only wish the show were longer -- and how often do we say that? Through July 27 at 3809 N. Broadway; reservations suggested.

"Public access" theater is a conundrum -- how can you possibly sustain a theater when you refuse to charge your audience? But no one asks why food pantries don't charge their clients: it's because they're providing something essential. Oracle demonstrates its belief that theater is essential food for the soul by not charging anyone for a place at the table. You go, guys.
-------------------------------------------------
Lance Baker is a fine actor and won a Jeff Award for this portrayal, so it's no pleasure to report that his talents are wasted on a revival of Will Eno's monologue Thom Pain (Based on Nothing). We learn that the character had a childhood trauma and a lost love and never recovered from either one. Certainly these are universal experiences but Eno's text seems deliberately to work against identification, breaking the fourth wall for a phony raffle and an uncomfortable audience-participation stunt. Pain himself is pathetic rather than sympathetic, an observer rather than a participant in his own life. Yes, the distancing is deliberate; but if this be Brecht, Eno has made the least of it.

Clearly there's something wrong with me, as this play was lauded as Best of the Edinburgh Fringe Festival and was a finalist for the 2005 Pulitzer. But flat-affect irony infuriates me: it's either a pose or a psychotic reaction, and neither one has a legitimate claim on my attention. Baker and director Jeremy Wechsler both do a lot of good work; wait til their next efforts. Through July 27 at Theater Wit at 1229 West Belmont in Lakeview.