One of the ideas I explore and develop in my book, The Jesus Dynasty, is the notion of not one but two Messiahs.

I had no idea it would become sensational -- much less controversial. It actually became headline news, with a cover story in USNews and World Report and special segments on ABC's Good Morning America, 20/20, and Nightline!

Jews and Christians today have come to focus on the appearance of a single Messiah -- a descendant of the lineage of David who is to reign as king in a messianic kingdom over the entire earth. These expectations are based on a dozen or more texts in the Hebrew Prophets that predict the reign of such a future scion of David (Isaiah 11, Micah 5, Jeremiah 23:5-6). 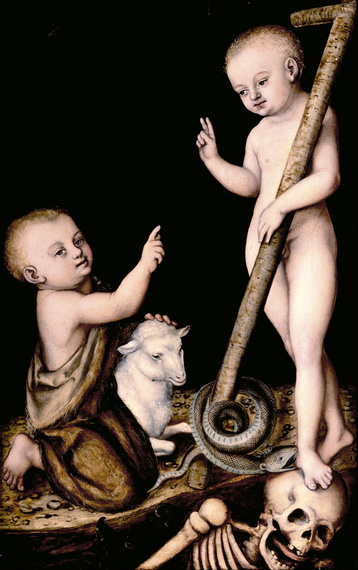 One of the Thirteen Principles of the Jewish Faith as formulated by the great Rabbi Moses Maimonides (1135-1204 CE), known by the acronym "the Rambam," states:

I believe with perfect faith in the coming of the Messiah, and though he may delay I will wait daily for his coming

Christians affirm that Jesus of Nazareth, crucified but raised from the dead and ascended to the right hand of God, is this Davidic Messiah or King and that he will return in glory "with the clouds of heaven" in a Second Coming to establish his reign over all the earth.

What few realize is that this expectation of a single Davidic Messiah had not so solidified in the time of Jesus. In text after text, in a diverse variety of of expectations reflected in a scattered range of primary texts from the period we read about any number of redemptive figures.

In terms of "Messiahs," what we find most commonly is not one but two Messiahs who are to usher in the Kingdom of God. One is to be a kingly figure of the royal line of David, but at his side will be a priestly figure, also a Messiah, of the lineage of Aaron from the tribe of Levi. The word "messiah" refers to one who is "anointed" or appointed. In ancient Israel both the kings and the priests were anointed with oil and were thus called "Messiahs."

The verb mashach means to "smear with oil," and a Moshiach or "Messiah" in English is one so smeared or "anointed" as we say in English. Technically speaking the "first" messiah was Aaron, brother of Moses, anointed with oil by his brother Moses in a formal ceremony that made him the Priest of Israel (Exodus 29:7). The first anointed king was Saul, anointed with oil by the prophet Samuel (1 Samuel 10:1). When Saul lost favor with God David was likewise anointed by Samuel as king (1 Samuel 16:13; 2 Samuel 2:4). Both priest and king were accordingly "messiahs" or anointed ones. This means that the notion of two messiahs was the norm in ancient Israel and this norm, of the dual messiahs was, of course, the one that was projected into the future once the nation begin to be dismantled by the Assyrian and Babylonian invasions in the 8th-6th centuries BCE.

Zechariah, the 6th century BC Hebrew prophet, foretold of a man called "the Branch" who would bear royal honor and sit on his throne, but he adds, "There shall be a priest by his throne with peaceful understanding between the two of them" (Zechariah 6:13). Here is a clear picture of the Davidic King and his counselor, the anointed Priest. Zechariah refers in another vision to "two sons of fresh oil" (i.e., "anointed ones" or "messiahs") who "stand before the Lord of the whole earth." He likens them in his vision to two "olive branches" that stand before the Menorah, the seven-branched oil lamp that symbolized God's Spirit and presence (Zechariah 4).

This ideal vision of two messiahs became a model for many Jewish groups that were oriented toward apocalyptic thinking in the 2nd to 1st centuries BC. The Testament of the Twelve Patriarchs, dating from the 2nd century BC puts things succinctly: "For the Lord will raise up from Levi someone as high priest and from Judah someone as king." (Testament of Simon 7. 2).

It seems, based on these texts, that the notion of "Two Messiahs" was the ideal structure of Jewish leadership. It is for this reason that the Maccabeans or Hashmoneans, in the 2nd and 1st centuries BC, who could claim only the Levitical priestly bloodline, were never really able to effectively establish themselves in the eyes of the populace as "kings," despite massive political and military power. Ingrained in the Jewish imagination the ideal future in which both a Priest and a King would rule together.

John the Baptizer identified himself as the "messenger" who was to prepare the Way based on a prophecy from the book of Malachi. The version we read in our modern Bibles today is as follows:

"Behold I am sending my messenger to prepare the way before me, and the Lord whom you seek will suddenly come to his temple. The messenger of the covenant in whom you delight--indeed, he is coming says Yahweh of hosts, but who can endure the day of his coming, and who can stand when he appears?" (Malachi 3:1-2).

This translation is based on the standard Hebrew text (Masoretic), the oldest copy of which dates to the 9th century AD. We now have a version of this very passage from Malachi found among the Dead Sea Scrolls. This scroll dates to the 1st century BC, so it is a thousand years older than our standard Hebrew text. Notice carefully the differences in the pronouns:

"Therefore behold I send my messenger, and he shall prepare the way before me. And they will suddenly come to his temple, the Lord whom you seek and the messenger of the covenant, whom you desire; behold he himself comes, says Yahweh of hosts, but who can endure them when they come?" (See Martin Abegg, Peter Flint, and Eugene Ulrich, The Dead Sea Scrolls Bible, p. 477.)

This ancient version of Malachi has two figures that are to come jointly -- a messenger of the covenant who prepares the Way, but also one called "the Lord whom you seek." The word translated "Lord" ('adon) is not the Hebrew name for God -- Yahweh, but a word that means a "master" or ruler of some type. It may well be that Jesus and John the Baptizer were familiar with this version of Malachi with the plural pronouns, and identified themselves accordingly. This was certainly the understanding of the sectarian community that wrote the Dead Sea Scrolls.

In one of the oldest founding documents of the Dead Sea Scrolls, The Community Rule, the community is expecting the coming of a prophet they called the Teacher, but also the "Messiahs of Aaron and Israel." They imagined a future in which the Priest Messiah would preside over a "Messianic banquet," with the King Messiah of Israel, whom they call the "Prince of the congregation," or the "Branch of David," as his companion. There are many references in the Dead Sea Scrolls to their fervent expectation that these two Messiahs would appear. As important as the "Branch of David" was to be, they nonetheless had the most extravagant hopes for the coming priest. In a text called the Testament of Levi we read the following:

The Dead Sea Scroll community waited a long time for the fulfillment of these central expectations. They had retreated to the Judean desert sometime in the 2nd century BC in response to the prophetic Voice they heard through the prophecies of Isaiah, Daniel, and Malachi. They became convinced that "this was the time" of the preparation of "the Way." They were the community of the "Last Days" responding to Isaiah's call to prepare the Way in the desert (Isaiah 40:3). Sometime in the 1st century BCE an influential figure arose among them who had great spiritual and interpretive gifts. They refer to him in the Scrolls as the "Teacher of Righteousness."

We don't know his name but many events of his life, and even some of his writings, are preserved in the Scrolls. The community saw him as a type of "Prophet like Moses" who had called them into a "new covenant." They viewed themselves as a remnant group of faithful Israelites who had turned from their sins and separated themselves from the ungodly society around them. They considered the religious establishment of their day, whether Pharisee or Sadducee, to be hopelessly corrupt and compromised. They lived by the strictest interpretation of the laws of the Torah and firmly believed they were living in the "last days." They believed that their Teacher had given them the definitive inspired interpretation of all the secrets of their prophetic writings.

When their teacher was killed, probably sometime in the mid-1st century BCE, they were convinced the final countdown had begun and that the two Messiahs would soon appear. There are some texts that speak of a final period of "forty years," following the death of their Teacher. The forty years passed but there is no record in any of the Dead Sea Scrolls that the two Messiahs ever appeared. It was as if all their hopes and expectations were stopped in time and put on hold. A small group of their community still lived at the settlement we know as Qumran in the 1st century CE. It is likely that they were responsible for keeping alive the hope of the coming of the two Messiahs and the Prophet like Moses.

Given these deeply rooted hopes and expectations among these Messianic Jews one can scarcely imagine the excitement and fervor that John the Baptist and Jesus would have stirred as they prepared their next moves in the spring of 27 CE. John as a priest from the tribe of Levi and Jesus as a descendant of David from the tribe of Judah must have stirred the hopes of thousands who had come to expect the arrival of the two Messiahs as a sure sign of the end. Even Herod Antipas soon felt the sting of John the Baptizers' blistering message of repentance. Christians are prone to imagine a "meek and lowly" Jesus who seldom raised his voice but the evidence will show that he learned well from his teacher and that like John the Baptizer, Jesus' radical message divided households and villages and shook the religious and political establishment.