While we await, hunkered down and hardly breathing, the Supreme Court marriage decisions later this month, let's not forget there is more to freedom and equality than the right to marry and receive federal relationship recognition. There remain all the civil liberty and economic empowerment issues that attach to being an American citizen, whether one is gay, trans, or queer in the broadest sense, and whether or not one is in a relationship, for better or for worse.

This week there have been two campaigns focused on individual liberty, one a social media campaign #morethanmarriage to educate and inform, and to lay the groundwork for the post-SCOTUS world. The other a legal case, Howe v. Haslam brought to the Tennessee Court of Appeals, the outcome of which may have huge, broad repercussions for people across the fifty states.

There have been a number of organizations working on aspects of the LGBT civil rights campaign alongside the marriage campaigns, including some organizations such as HRC and our research and legal advocates, which try to cover most if not all of the bases, if not always at the same time. Laboring for anti-discrimination laws are, first and foremost, local and state organizations, including my Maryland organization, Gender Rights Maryland, while the only national organization dedicated to the employment discrimination issue is Freedom to Work. There have been social media campaigns, with petitions on www.change.org, and now the latest campaign, from the Transgender Law Center in San Francisco, called #morethanmarriage. While heavy on the trans rights aspect, as one would expect, it is also pushing for anti-discrimination laws to protect gender-conforming gay persons as well. The effort is to not only educate the larger American community that the LGBT community doesn't have the basic rights most Americans take for granted, and most Americans believe we already have, but to educate the gay community so they recognize that marriage equality, while very significant practically and symbolically, is not the be all and end all of equality. 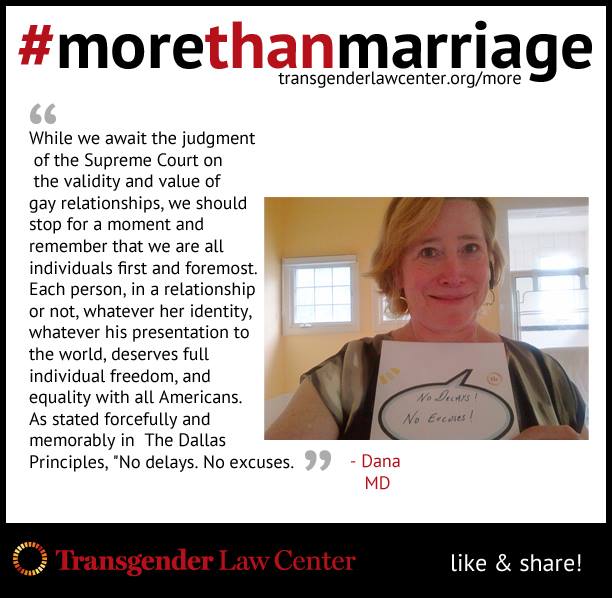 The other case, Howe v Haslan, confronts a very noxious new campaign by fundamentalist forces to overturn duly passed laws by local municipalities to protect their LGBT population. While it has been difficult to but slowly increase the number of states with comprehensive anti-discrimination laws on their books (16 states + D.C. + Puerto Rico, and 21 states with sexual orientation-only policies), there are many more local jurisdictions, over 140, which offer the same protections within uncovered states. The results of the 2010 midterm elections led to a tidal wave of Republican control of state legislatures, some of which are trying to overturn their local protections. At the forefront is Tennessee, possibly the state most hostile to the LGBT community today. The Tennessee legislature in 2011 passed HB600, nicknamed the Special Access to Discriminate ("SAD Act") by equality organizations. The state law stripped local governments of their non-discrimination laws. As the plaintiffs, including Marisa Richmond, the Tennessee Equality Project and the Tennessee Transgender Political Coalition, stated, "HB600 was founded in prejudice and motivated by certain legislators' desire to punish the city of Nashville for enacting an ordinance for extending existing local protections to gay and transgender Tennesseans. As the U.S. Supreme Court has held, in a case very much like this one, "if the constitutional conception of 'equal protection of the laws' means anything, it must at the very least mean that a bare . . . desire to harm a politically unpopular group cannot constitute a legitimate government interest."

I had the pleasure of befriending Nashville Councilwoman Megan Barry when we were classmates at Harvard's Kennedy School in 2008. She soon became the chief sponsor and major power pushing Nashville's comprehensive anti-discrimination ordinance, which covered the city's trans as well as gay populations. Now, following the reactionary sweep in the state in 2010, her law hangs by a thread in the court.

This case highlights the power of local government to do good, even when it takes political capital to do so, and the ever-present possibility of a reaction which can overwhelm that good when greater power is brought to bear. It is hard to believe that the court in Tennessee would ignore the judgment from Romer v Evans, but it might, and this case may end up at the U.S. Supreme Court. It bears watching, as other strongly majority Republican legislatures would jump on a bandwagon to mimic Tennessee and make life as miserable as they can for their gay and trans citizens. Pro-equality decisions from SCOTUS will do little to impede this conservative anti-freedom campaign, and might even create a backlash.

One last point -- take note of the language used by the reporter for The Tennessean, as an example of the deeply rooted bigotry coloring coverage of this case:

[...]Monday, attorney Shannon Minter with the San Francisco-based Center for Lesbian Rights told the three-judge appeals panel that there is "nothing like this in the country that specifically excludes one group of people." She called the state law "a dangerous statute that warrants some judicious scrutiny.

Shannon is a trans man, and has been for many years. There is no way anyone would mistake him for a woman. Imagine what life is like being transgender in Tennessee today.