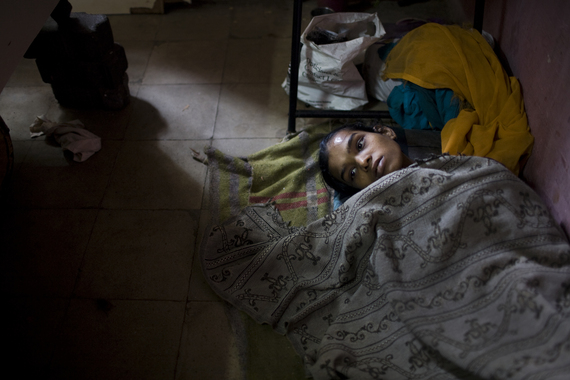 She's only three years old, and she is already in the fight of her life. Having breathed in a deadly bacterium, she now suffers from extensively drug-resistant tuberculosis (XDR-TB). As reported in the Indian press recently, her parents have no idea how she contracted the infection, since no one in the family has had tuberculosis (TB).

But this girl lives in a poor community in Mumbai, India, and the disease is spread simply by coughing. Mumbai is the country's financial capital, yet TB is so common there that it is even killing health personnel: at just one hospital, TB has sickened 68 nurses and doctors and killed 12 in the past four years.

Doctors are puzzled about how to save the young girl's life. How will they get her through the two to three years of daily injections and a fist full of pills, plus the constant nausea from the medication? Will she be left permanently deaf by the treatment, a common side-effect? TB is curable, and, when placed on effective treatment, a patient quickly becomes uninfectious. But, with XDR-TB, the odds are against her. Based on global treatment success rates she has about a 20 percent chance of survival.

Don't assume this could never happen in the U.S. In fact, a three-year-old girl in Maryland, with family ties to India, recently developed XDR-TB, having likely contracted it while visiting relatives in that country. Thanks to dedicated medical personnel and her family, she has now completed the arduous treatment.

18 cases of XDR-TB have occurred in the U..S since 2008. However, much more common is multi-drug resistant TB (MDR-TB), a strain very nearly as bad as XDR-TB, with an average global treatment success rate of just 48 percent and requiring a similarly toxic regimen, sometimes causing psychosis.

The U.S. has about 100 new cases of MDR-TB a year. These cases lead to more than 1000 exposures and more than 300 infections with MDR-TB, over a two to three year period, according to the US Centers for Disease Control and Prevention. Then, the infection often lies dormant, sometimes for many years, becoming active when the body is weakened, frequently by diabetes, immunosuppression or other common conditions.

Even with the full-blown disease, people may go to work and visit family, not realizing that their nagging cough is actually something quite serious. In 2009 a teacher in a California elementary school went to work not knowing she had MDR-TB, inadvertently infecting 31 children.

Perhaps 100 additional cases a year does not sound like a lot. But the fiscal impact of drug resistant TB at the state and county level is enormous, up to $400,000 for each case of MDR-TB and $1 million in the case of XDR-TB, with most of the burden falling on the public sector. The US relies on very few suppliers of TB medication and so is vulnerable to price spikes. The fiscal impact in developing countries is even greater.

Thirteen years ago, I wrote a book about MDR- and XDR-TB, entitled Time Bomb. I warned that drug-resistant TB would spread globally, and, because of the nature of the disease, it could not simply be stopped at the US border.

Today, our world is more interconnected than ever by family ties, tourism and commerce, and globally we see about 500,000 new MDR-TB cases each year, with most going untreated. In South Africa, drug resistant TB poses an "unprecedented, long term threat," according to a striking new report from the Center for Strategic and International Studies. In just three days time, TB in all forms kills about the same number killed in the entire Ebola outbreak.

Has the ticking of this disease time bomb been heard by our leaders?

I am happy to report there are now some encouraging signs. The White House announced in March that it would develop a comprehensive National Action Plan to combat drug resistant TB, involving all the relevant agencies, and finalize it this fall.

Interest is also growing in Congress -- ten US Senators sent a letter to the President commending him for initiating the Action Plan. A bipartisan TB Elimination Caucus in the House of Representatives is calling for action. Gayle Smith, the President's nominee to head the US Agency for International Development, was questioned about the US response to tuberculosis during her Senate confirmation hearing. Congress is funding promising research on improved medications for drug resistant TB.

Recognition of the epidemic is also growing globally. Corporate leaders in India recently joined with the US Ambassador and a major Bollywood star to warn of the economic impact and to urge all of society to mobilize against TB. In the hardest hit countries, US assistance is building capacity by helping countries better plan and coordinate their responses and provide support to patients. Parliamentarians from across the world have formed a Global TB Caucus that is building political will.

The UN General Assembly has now endorsed a new set of global goals to end poverty, including a goal to end the TB epidemic by 2030, and the Stop TB Partnership is working out a practical plan to put this in motion over the next five years.

There is unquestionably renewed momentum in this effort. President Obama can now harness it with a bold and ambitious plan of his own.

If he proposes, and Congress approves, the necessary funding boost to implement his plan, we can avert the enormous cost of an escalating drug resistant TB epidemic. We can work with leaders around the globe who are ready to intensify their efforts for both prevention and treatment and end the stigma about the disease. We can jumpstart crucial research, including for an urgently needed TB vaccine.

But, if his TB Action Plan ends up just another unfunded plan gathering dust on the shelf, issued in the twilight of his Presidency, then all we will have is the steady ticking of the TB timebomb -- and many more children like this little girl in Mumbai who, through the simple act of breathing, got XDR TB.