My friends and I drove through a drizzly night in San Jose after a long day of sightseeing some of Costa Rica's best attractions: colorful animals, happy people and green jungles. Then, there was a long drive back into the city and a long, slow dinner. While I knew we were all exhausted and had full bellies, I asked anyway. "Who's up for the merengue?" I danced in my car seat hoping to drum up some enthusiasm. 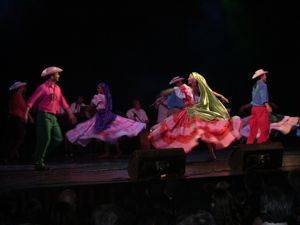 I had been in Costa Rica all week and planned to discover a deep nuance about Costa Rican culture. I make it my mission to find some cohesive logic that defines every place I travel to. I decided the merengue would help me understand Costa Rica. I did not have a great reason for my conclusion. It was just that there was something about Costa Rica that made me want to dance, but dancing would have to wait.

My question was responded to by handfuls of raindrops that tapped against the windshield. Unfortunately, my Tico (local Costa Rican) friends that had promised to take me out to a local club were now carefully and silently backing out of the deal. It was late, and I understood. Still, I was still disappointed. I would have to wait to dance in Costa Rica a little longer. Waiting in Costa Rica had become a theme.

As I pressed my forehead against the cold glass window of the car, I thought about my trip up to that point. The fabulous Howler Monkeys that had me in awe by day, kept me awake at night with their constant howling -- I waited for sleep. I stayed at nice hotels but never had a hot shower -- I waited for the plumbing to be fixed. Every Costa Rican hike started sunny and ended in a downpour. Small, ankle-high, tip-toe-friendly streams became perilous chest-high rivers after the rains -- I waited for the water to recede. So did everyone, and everything, else.

The same rain delayed planes and stranded cars at washed-out roads. The bridges, while used by everyone, appeared ready to fall down after the next downpour, which would be in about ten minutes. No matter the difficulty, the locals just went along with their day: stranded, soaked, sleepless, or not. Life went on while everyone waited. However, the blackberry juice had been consistently delicious and the nature is beyond compare. I saw tree-nesting sloth, four types of monkeys, parrots, macaws, toucan birds, coatis, agoutis and anteaters within the first day of my visit.

I sat quietly while we drove toward our hotel through the chaotic hilled streets of San Jose after dark. As I sat in the quiet, I got the feeling that Costa Rica was somehow broken from all the waiting.

What was the broken part? I am not sure. I know that it rained on me a lot. I took bumpy rides for an hour each way only to find poor Internet connections. I know that the slow pace of life leaves everyone wearing a sarong and flip-flops for dress occasions. I wondered if these were good examples of Costa Rica being broken.

This was the Costa Rica I had come to know. I didn't have any plans when I came to Costa Rica, no expectations. I only knew there were a whole lot of other people professing that they loved Costa Rico. Many said, "I wished I could move there" and become one of the many expats that melt into Tico culture and its fussy natural world -- with delicious blackberry juice.

Then it finally hit me as I sat in the car with my friends waiting, stopped in a late-night traffic jam on a windy San Juan highway. Maybe Costa Rica was not broken. I thought about how Costa Rica might be the essence of travel. I realized that I lost myself in the mire of the unknown. Travel was crossing the stream before the rain and having to wait before safely crossing it on the way home, sometimes risking it and crossing it anyway. It was being stranded and soaked and waiting. I realized that when I waited, I was not alone. Costa Rica's colorful birds waited with me. So did the once noisy monkeys. So did the joyous people. The rain was the only thing that kept everything quiet. The waiting gave me time to ponder.

As the car started to move again, I understood Costa Rica is adventure, whether I was waiting or stunned by its ability to move in stride with its surroundings. It is a waiting game with Mother Nature. Yes, you can go horseback riding, but you didn't say "Mother May I," so I am going to rain on you and you will feel alive and accomplished. The Ticos know this and act accordingly -- in fact, they seem to relish the idea of things going at the pace that is acceptable to the powers that be. Yes, Costa Rica vacations are the adventures waiting to happen and sometimes a memorable adventure while waiting. Because when the rain stops, all will celebrate a moment in the sun. Little did I know I had been dancing with Costa Rica all along.