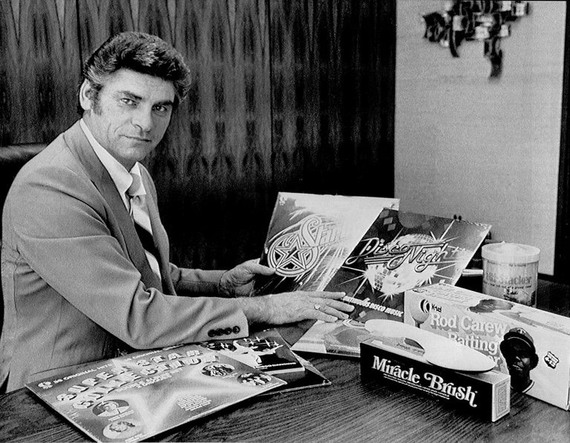 Do you remember the Veg-O-Matic?

How about the Patty Stacker or the Miracle Brush?

Not to mention 25 Polka Greats Hits!

If you have no idea what I'm talking about...if it rings a vague bell of recognition...and especially if it makes you smile with nostalgic reminiscence...you must read on and celebrate the life and accomplishments of Philip Kives, the entrepreneur and founder of K-tel, who passed away last week at the age of 87, leaving behind a legacy of amazing marketing intuition and insight that has sadly never been given the recognition it deserves.

Truth is, his rags to riches to rags and back to riches story is inspiring in and of itself - but there is much to be learned from his embracing the growing power of TV back in the 1960s, going against the powerful currents of Madison Avenue and "short form" commercials.

Click through to read the story of his hardscrabble young life in Canada:

"Philip Kives, Pitchman Who Perfected 'As Seen on TV' Infomercials, Dies at 87"

But he had drive and vision:

In 1957, the young Mr. Kives left the farm for Winnipeg, where he worked as a cabby and a short-order cook. He began selling sewing machines and vacuum cleaners door to door, following the wires strung over newly electrified parts of town to find and court his customers.

Think about that use of highly targeted data...

He then traveled the US and Canada hawking goods at trade fairs and such until he landed a job in Atlantic City demonstrating pots and pans at a Woolworths store on the boardwalk, where he had to make a sales quota...or else.

But then a lightning bolt struck and he had a revelation - why talk to a few dozen, at most, at one time when he could reach thousands on this newly ubiquitous medium called TV...and the rest, as they say, is act now and there's MORE!!!

We all laughed at his commercials...the pumped-up volumes; the long lengths; the plain every-person's English as they told the story; the grainy, cheap production as all that was important, really, was to tell the story - show the product working - create the need - and close it all with a deal that could not be passed up.

And when you look at the quantities he sold you have to ask yourself how come in our sophisticated age of highly targeted and dynamically created personalized custom content do they still seem incredibly impressive - in fact, maybe even more so...

Watch the clips...revel or revile as you see fit - but make no mistake, Philip Kives used TV as it had never been used before and he revolutionized (we would say disrupted - he didn't know the term then) the music business, as reported by The Guardian:

Today, marketing executives like to regard themselves as super-sophisticated, guiding what they do with endless data, market research and analysis; but they are still working on many of the same principles that Kives perfected half a century ago. Except he was arguably much closer to the audience, understood them better and respected them.

And there you have it...he understood and respected his audience - something we can all learn from...

And here's one more tidbit:

K-tel's musical compilations have moved to the digital world -- "Today, the company's primary business is the licensing of its music library to films and television and the sale of music downloads through platforms like iTunes."

And if that's not a lesson in marketing ingenuity, proving the liability and longevity of great marketing ideas, being able to move from one medium to another and from one era to another, then I don't know what is.