I didn’t go to school today ― I couldn’t.

I’m not sure I’m in the state of mind to write anything remotely coherent, but I write this because I refuse to let him silence me.

I write this because last week I wrote a piece in this same publication asserting that:

My existence is now constantly measured in terms of my reaction to you, Mr. Trump, and I have a simple response; I do not exist for you or in terms of you, and I never will.

I stand by my truth, but I’m not sure where to go from here. I certainly still do not exist for Mr. Trump, and this might be his America now, but the only part of me he can claim as his is my distaste for his being.

It’s only been a few hours since since President-elect Trump has been declared, but I already see a different America.

My timeline is cluttered with stories of Muslim kids bawling, the LGBTQ+ community scared for their future, Latinx folks not sure if they have a future in this country, #BlackLivesMatter organizers heartbroken, women/girls telling stories of how they feel personally betrayed, and thousands of people dehumanized. In sum, my timeline looks exactly like Trump would want it to look like.

To those who say to calm down: stop. I lay on the hardwood floor of my room last night hyperventilating. I thought of my grandma who wears hijab (the Muslim headscarf) in Virginia, all my friends who are visibly different, my undocumented friends, the safety of my sister in North Carolina, the civil liberties of people of color, women’s rights, LGBTQ+ rights, the Muslim kids being bullied in elementary school right now, legitimized hate crimes, the celebrations of white supremacists, and my own future. This hits me so hard, but the reality it is ― there are so many for whom this hits so much harder. I stand in solidarity with all those numb today, and particularly those who cannot escape the violence that may be projected onto them.

Trump ran a campaign on hate, lies and fear, and people bought it. This isn’t funny. This is my home. This is my country.

Michael Moore said it best; this wasn’t just an election ― this was a referendum on bigotry. And, bigotry won. The Alt-Right is already celebrating. The Alt-Right who exists under the guise of an ambiguous title, but is nothing more than a white supremacist nationalist group who seek a to rid this country of anything deemed as “other.”

If you are walking through today laughing, happy and excited ― do not pretend to care about your friends who in their beds crying, sick to their stomach, and heartbroken because of what their future holds in this country. That is not friendship, and don’t you pretend like it is. That is not humanity.

Also, if you are saying that his policy won’t actually be that extreme; stop. Rudy Giuliani being Attorney General, Newt Gingrich being Secretary of State, and all of Congress being majority Republican is beyond horrifying. The reality is that Stop and Frisk will return, that for so many of us ― our families abroad might be “carpet bombed,” that Roe v. Wade might be overturned, that my grandparents from Bangladesh might not be able to visit me, that conversion therapy could be federally legalized, that families will be broken apart, and that police brutality will sharply increase. That all makes me feel ill, but right now that’s not even why I’m in bed.

The worst of it for me is waking up in America after crying yourself to sleep, and not feeling safe. (If you don’t feel that way, you don’t get to belittle how millions of us are feeling.)

The worst of it is knowing that hate won, and all of the policy that will erupt from that is absolutely cause to be dramatic. Trump ran a campaign on hate, lies and fear, and people bought it.

This is my America.

I always knew that I shared it with bigots, racists, homophobes, sexists, and those who seek to undermine the progress of this country. This isn’t some sort of wake-up call. I knew there were many of them. I knew it would be close.

Now though, they are empowered. Just during the election, hate crimes against Muslims increased by 89 percent. That number is going to skyrocket against my community and so many others.

The thing is, I always knew this was my country, and the fact that I’ve always known that is exactly what made so many white supremacists so upset. But now, they feel as if they’ve won their country back.

But today, I say no. As the tears stream down my face, as my stomach churns, and as my fingers barely find the energy to write this ― I say no.

I believe in democracy, and I will find it in my heart to accept Trump as our president, but I will not let this silence me. I will not be quiet. I will not succumb to fear. I will not feel intimated.

I’ve spent my entire high school career fighting for love, equality, and justice. I started an organization in eighth grade with that mission, redefy. I feel like I’ve failed.

This is a disaster for progress, for our economy (the market is already crashing), for diplomacy, for liberty, for democracy, and in every capacity. There is no silver-lining.

I will continue to work towards bettering our flawed democracy, campaigning for progress, and demanding a tomorrow where we can all feel safe.

It’s going to be hard. I will feel like I’m shouting in the dark. This will not be the last day I cry.

I’m shattered, scared and just so so sorry, but there is so much work to be done.

So today, I sulk in my bed wondering where my place is in this country (my only home) will be. But tomorrow, I will continue to rise as a proud American-Muslim teenager, and I will not let anyone take that away from me no matter what tomorrow holds. Tomorrow, we rebuild. We have to.

Waking Up In Trump's America
Shock And Silence In Times Square 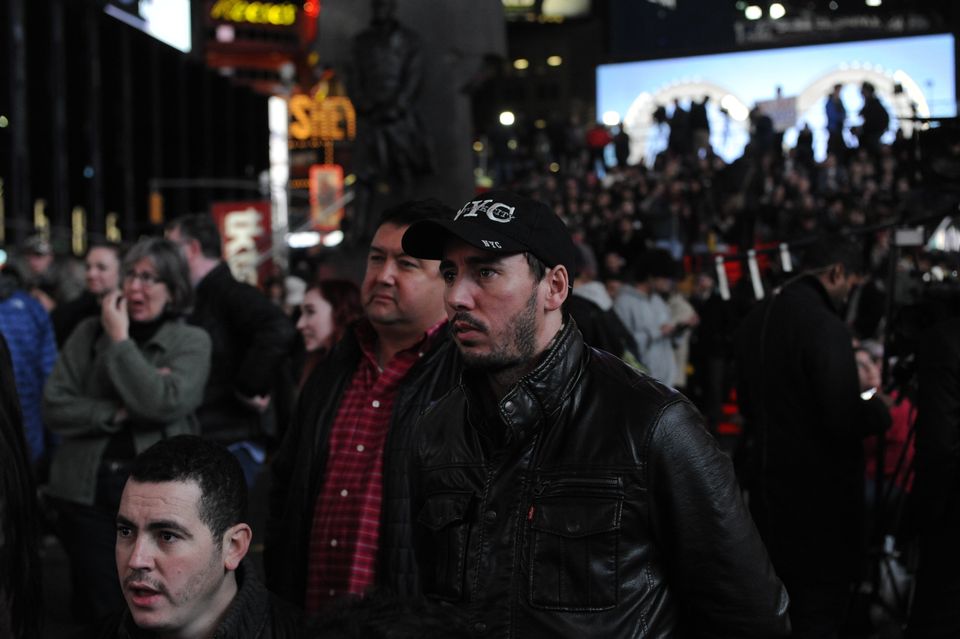