WASHINGTON -- The U.S. government has wasted almost $200,000 on a medical clinic in Afghanistan that was built improperly and sits unused nearly two years after being constructed, according to an audit by the top U.S. watchdog for Afghanistan reconstruction.

The medical clinic was intended to provide basic health care for the 7,000 inhabitants of Walayatti, a village in Kabul province, so they wouldn't have to travel five miles to the next nearest facility. In February 2011, U.S. forces awarded a $194,572 contract to the Afghan-owned Bonyad Watan Limited Construction Company.

But according to a new report by the Special Inspector General for Afghanistan Reconstruction, none of the three structures that were supposed to make up the clinic were built properly.

For example, the restroom was supposed to be composed of two rooms each with two stalls -- one room for men, one for women. Instead, the firm built it as one room with four stalls. 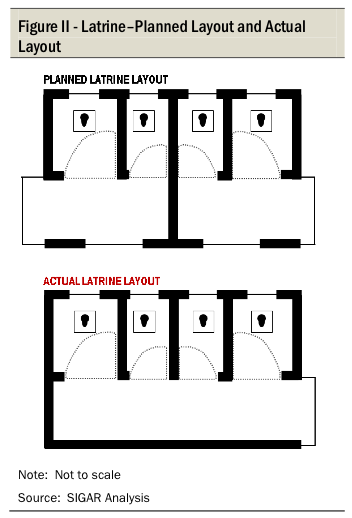 The contract also called for the installation of three hot water heaters, but SIGAR found just one during its February inspection. There is no well house for the water pump, as was required, and the layout of the main clinic is not the same as was planned.

An Army official told SIGAR that it appeared "the third water heater was either installed and stolen, or never fully installed."

The funding for the clinic came from the Commander's Emergency Response Program, which gives military officials money to spend on reconstruction projects in Iraq and Afghanistan.

"A crucial factor in the selection and the success of a CERP-funded construction project is whether the facilities built will be used as intended by the communities they were meant to serve," wrote Sopko. "By this criterion, Walayatti medical clinic cannot be considered a success."

In addition to the construction flaws, SIGAR faulted U.S. forces for not properly transferring the facility to the Afghan government, and for not keeping the proper documentation of the project and any construction changes.

"A village elder who accompanied us during our site inspection stated that he had visited MOPH [Afghan Ministry of Public Health] on several occasions seeking staff and supplies for the clinic, but he said that MOPH had not been responsive," SIGAR John Sopko wrote in his report. "As a result, the clinic remains empty and unused. Meanwhile, the village inhabitants keep a guard at the clinic to prevent vandalism."

SIGAR officials were also told by a village elder that coalition forces had "visited the clinic only one time -- when construction of the project had been completed."

"Without adequate project monitoring and oversight there could be latent construction defects, which over time could negatively affect the safety and integrity of the facilities," said Sopko.

U.S. forces responded that MOPH had been trying to get the facility up and running but ran into issues locally when it attempted to bring staff from a neighboring community to operate the Walayatti clinic. Various agencies in the Afghan government and local leaders have agreed to use it as a library and for administrative purposes until MOPH can staff and equip it as a medical clinic.

1 / 8
Start of War: Oct. 7, 2001
<em>American soldiers hide behind a barricade during an explosion, prior to fighting with Taliban forces November 26, 2001 at the fortress near Mazar-e-Sharif, northern Afghanistan. (Photo by Oleg Nikishin/Getty Images)</em>
Getty