Although the Waldo Canyon Fire is now 90 percent contained as of Thursday, officials are warning of a new possible disaster for the region: flash flooding.

The Colorado Springs Gazette reports that thunderstorms over the foothills could cause flash flooding in areas now exposed due to the wildfire having consumed the natural vegetation.

"Once the rain hits the areas that burned hotly, those soils will not be enough to absorb any of the moisture," meteorologist Kathy Torgerson with the National Weather Service in Pueblo told the Gazette. "It will mix with the ash and cause these mud and ash flows. And they can be quite dramatic."

This could mean another round of evacuations for the fire-ravaged region which, at the peak of the Waldo Canyon Fire burn, faced evacuations of more than 32,000 residents on June 27.

Rain and thunder may be headed to the Front Range as early as Thursday, according to 7News. The hottest June on record could be followed by a very wet July, a much-needed relief from the heat and dryness to be sure, but one that could have dire consequences for wildfire affected regions.

The National Weather Service says that flash flooding is a concern for the Waldo Canyon fire burn scar, "Any heavy rainfall on the burn scar will produce rapid runoff along with dangerous debris flows."

Jeff Kramer with the El Paso County Sheriff's Office told 9News that emergency crews have set up a flash flood task force to be ready to help residents if a heavy downpour does arrive.

On Thursday, officials also announced that they have determined the ignition point of the Waldo Canyon Fire. According to The Denver Post, the spot was not revealed and officials did not say whether or not the fire was human caused.

Firefighters have had a series of successful days containing the fire despite temperatures remaining above 90 degrees since mid-June.

The Gazette reports that utility crews are working to restore natural gas to more than 3,000 homes in the region and hope to have that done by mid-week. But crews must go house to house making sure there are no leaks first before the gas gets turned back on. Crews have begun working on replacing damaged or destroyed power lines in the region as well.

Evacuation orders have been lifted for Eileen Court, Centauri Road, Boardwalk Drive and Corporate Plaza Drive as of Monday, according to 9News, and gas has been restored to homes in those areas as well. However, residents returning home remain on pre-evacuation notice as potential for fire growth remains high.

On Sunday, some residents were allowed to temporarily return to their homes for the first time since being evacuated. Many remarked at the chaos that their neighborhoods have been reduced to. "It's crazy," Bill Simmons said to The Associated Press regarding the conditions of his home which remains intact and his neighbors' homes which were reduced to ashes. "The house across the street is burned to the foundation and the other side of the street is untouched."

The Associated Press also reports that a "bear invasion" has been challenging authorities in the region. Evacuees rushed away from their homes and didn't have time to properly secure garbage -- some bears, pushed out of their forest habitat from the fire, have picked up the scent and have come in search of a meal.

The devastation from the fire and possible flooding isn't the only thing residents need worry about -- thieves are taking advantage of the evacuated areas and looting homes. At least 32 homes were burglarized and dozens of evacuees' cars were broken into in the evacuation zones since the fire erupted about a week ago, according to Bloomberg. There have been three arrests so far.

The string of burglaries has some wondering if Colorado Springs' anti-tax movement is partially to blame for a lack of resources to protect the area effectively. Bloomberg reports that the city has 50 fewer police and 39 fewer firefighters than five years ago.

In 2010, Colorado Springs had a nearly $28 million budget shortfall so the city government sold police helicopters on the Internet, cut firefighter and police jobs -- including burglary investigators, according to The Denver Post -- asked residents to volunteer to mow public green spaces, and turned off more than thirty percent of the city's streetlights.

Karin White, a 54-year-old resident who returned home to a looted and vandalized home, thinks that the smaller force may have "impacted the response," she said to Bloomberg.

Mayor Steve Bach, an anti-tax advocate advocate, says that the lack of tax revenue has not affected the handling of the wildfire, but he offered a dire warning after a press briefing about the fire: "Forget the fire, at our current cost curve, we'll be insolvent in eight years."

Rebuilding in the wake of the Waldo Canyon Fire will be expensive and unfortunately one of the region's main sources of income -- tourism to the Garden of the Gods, historic Manitou Springs, Pikes Peak Cog Railway -- is deeply affected by the disaster. 7News reports that areas like Manitou are usually packed with tourists this time of year, but the streets remain only peppered with visitors. The railway which usually has around 2,000 visitors around the 4th of July holiday is hoping to just get close to 1,000 this year.

The cause of the Waldo Canyon Fire is still under investigation and has cost $14.5 million to date. 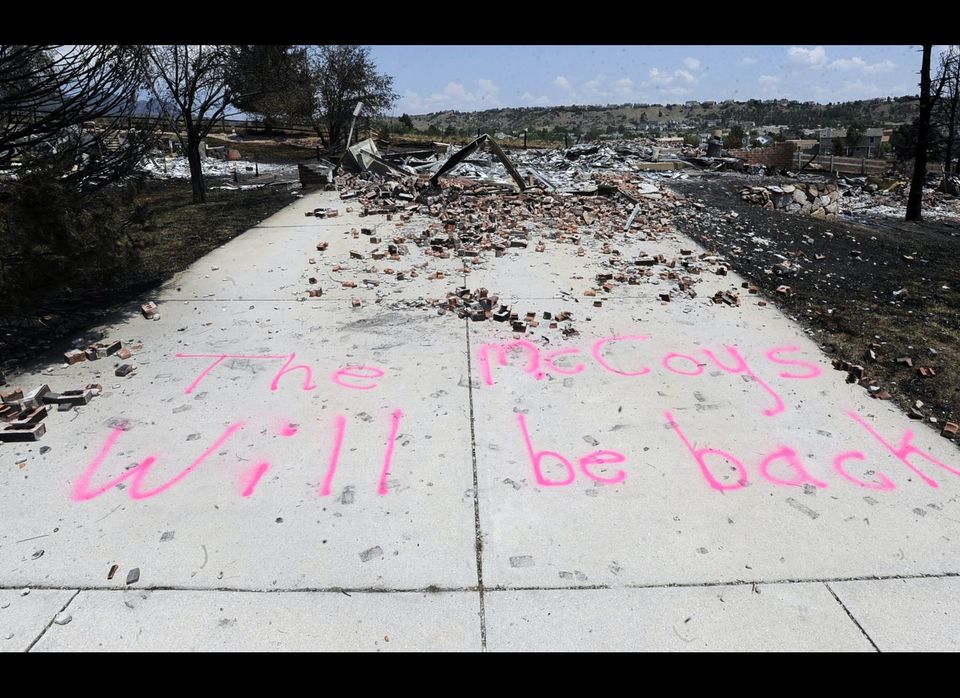 1 / 148
A message is displayed on a driveway near the remains of a home in the Mountain Shadows neighborhood of Colorado Springs, Colo., Thursday, July 5, 2012. The neighborhood was ravaged by the Waldo Canyon fire, which has burned about 28 square miles and has damaged or destroyed almost 350 homes since it started June 23. (AP Photo/The Colorado Springs Gazette, Jerilee Bennett)
AP