On June 23, the Waldo Canyon Fire broke out northwest of Colorado Springs and became the most destructive wildfire in Colorado state history. Now more than two months later, authorities are saying it was human caused, but they still don't know if it was intentionally set.

At a press conference today, The Denver Post reports that investigators have determined that the fire started within 3 miles of the Waldo Canyon trail head off of U.S. 24 and that it was human caused. However, Colorado Springs Police Lt. Adrian Vasquez also said that authorities believe there is someone out there who may have started the fire, but until that person comes forward, the true cause may never be known.

The fire's cause was confirmed to be human in origin by the Forest Service weeks ago -- a natural-cause from a lightning strike was deemed unlikely because the National Weather Service said that for June 23, the official date of origin of the fire, and for the day prior, the skies were clear and no thunderstorms were observed.

The confirmation of the fire being the result of human activity still leaves a lot of questions because a human-caused fire can be the result of anything from accident to negligence to arson and authorities would not say which they are leaning toward at the press conference.

The Waldo Canyon wildfire began burning on Saturday, June 23 and was declared officially contained about two and half weeks later on Tuesday, July 10. When the smoke cleared, the fire had forced the evacuation of more than 32,000 people, consumed 18,247 acres, destroyed 346 homes, left two people dead and was part of Colorado's worst wildfire season in a decade. As of July 17, the total costs of fighting the fire had risen to $16.6 millon, according to InciWeb.org. Since that date, approximately $25,000 a day has been spent on repair of the land adding up to around another $1 million to date.

The fire burned so hot that wildfire experts say that nearly 20 percent of the total 18,247 acres (29 square miles) consumed by the blaze was burned so severely that no living vegetation was left on the surface nor root systems left below the surface to a depth of about 4 inches, The Associated Press reported. About 3,375 acres (about 5 square miles) was determined to be damaged so badly, left so baren after the blaze ripped through the area that it was likened to that of a moonscape. 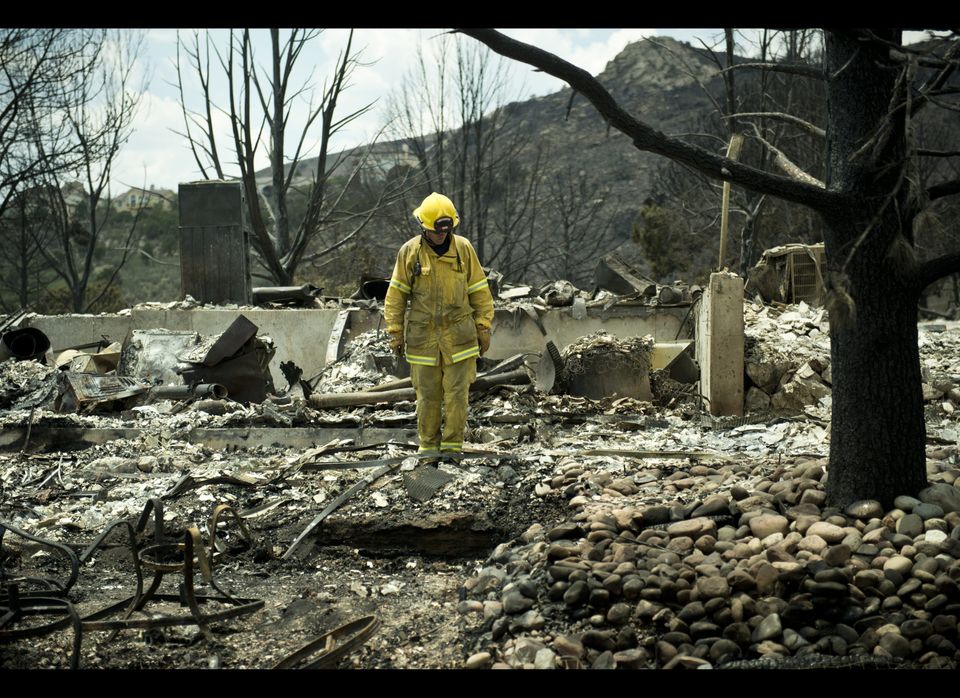 1 / 43
A firefighter stands in rubble in the Mo
A firefighter stands in rubble in the Mountain Shadow neighborhood, which was burned by wildfires about 72 hours ago, on June 29, 2012 in Colorado Springs, Colorado. US President Barack Obama, who declared a major disaster in Colorado and offered federal assistance, is in the Colorado Springs area to survey wildfire damage and efforts to contain the natural disaster. AFP PHOTO/Brendan SMIALOWSKI (Photo credit should read BRENDAN SMIALOWSKI/AFP/GettyImages)
Getty