Walkable cities aren't just easy to navigate -- they're also richer and have higher percentages of college grads, according to a new study.

The new report is the work of Patrick Lynch and Christopher B. Leinberger from George Washington University School of Business' Center for Real Estate and Urban Analysis. The researchers ranked the 30 largest metropolitan areas in the country by how "walkable" they are, and then compared that to the cities' GDP per capita and percentage of college graduates over 25.

The researchers found that cities with more office and retail space in their walkable areas had higher per capita GDPs and higher percentages of residents with bachelor's degrees. 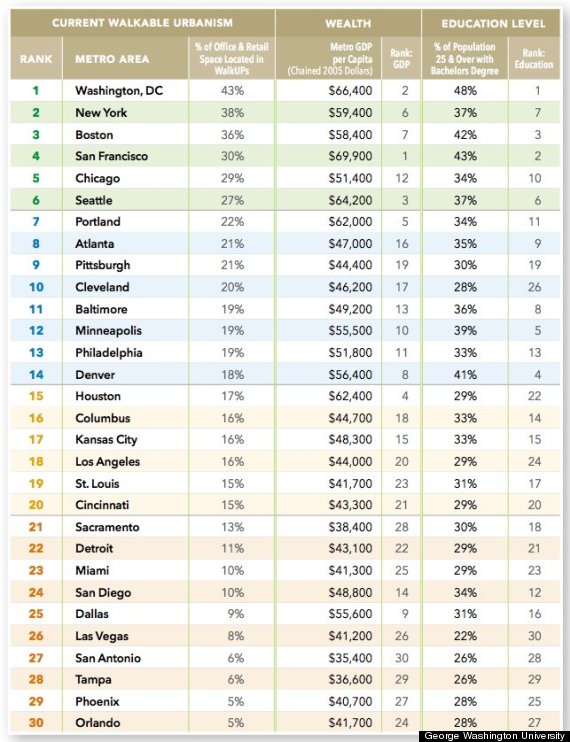 The researchers plotted their results on the chart below, and each dot represents a city in the report: 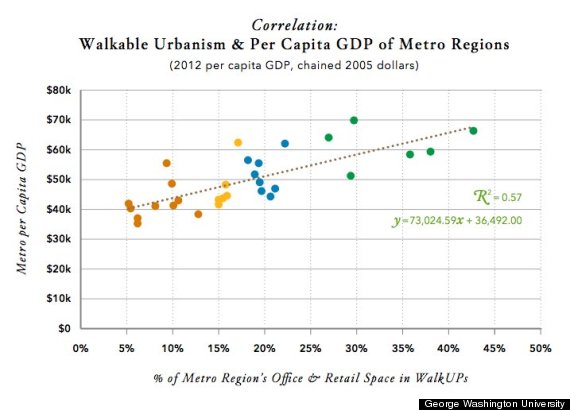 Of course, some of the top metropolises in the report have history on their side. Cities like New York, Boston and San Francisco developed their infrastructure long before cars became an American mainstay, making them naturally more walkable. And many of these locations are home to major industry and business. Cities at the bottom of Leinberger and Lynch's list tend to be younger and have had less time to build things like subway systems.

It's also important to note that some of the most walkable cities in the report are significantly more expensive than the locations that took the lower spots. New York City is a dramatic example of a metropolis where too many walkable urban places have been concentrated over a tiny landmass, creating an unsustainable housing situation.

In a phone interview, Leinberger advised spreading out walkable urban development across cities and suburbs to avoid what he called a “supply-side problem."

But even with the risk of higher prices, Leinberger said it makes sense for cities to go in a more walkable direction. "The GDP gap between the highest-ranked metro areas and the lowest-ranked is like the gap between Germany and Romania's," Leinberger said. "That's the most compelling reason to [invest in walkable areas]."

Some cities with a reputation for urban sprawl (like Miami, Atlanta, Los Angeles and Denver) are getting on board, “making some surprising and unexpected shifts toward walkable urban development,” according to the report.

Walkability has been found to be an important factor for college-educated millennials when they're choosing where to live after graduation. That could also explain why the report found these pedestrian-friendly cities house a higher percentage of college graduates over the age of 25 than cities where urban sprawl is prevalent. 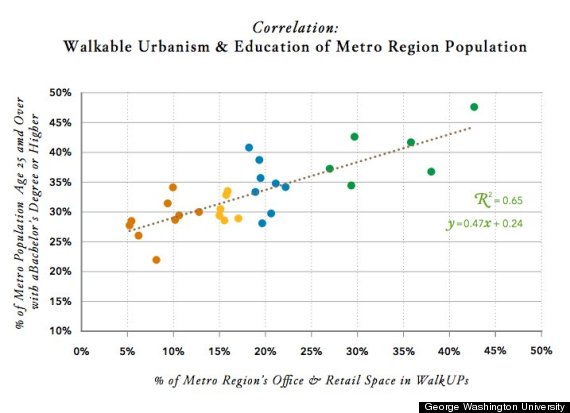 And if attracting young, college-educated residents who can up a location's GDP isn't enough of a reason for cities to invest in walkable areas, a separate study out of Georgia State University lists one more: It's good for the environment.

Leinberger agreed with the Georgia State findings. Reducing urban sprawl "is probably the No. 1 way we're going to address climate change," he said.