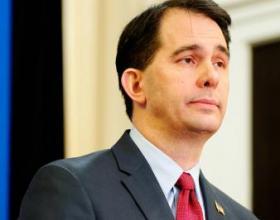 Wisconsin Gov. Scott Walker is being called rash and reckless, especially this week when he pledged to terminate the nuclear deal with Iran on the first day of his presidency. He then threatened to take military action right off the bat, presumably against Iran ("I don't want a president who is not prepared to act on day one").

It was Jeb Bush who replied, "If you're running for president, I think it's important to be mature and thoughtful about this." Bush sounded more like his father, Bush 41, than like his brother, Bush 43: "Maybe you ought to check with your allies first, maybe you ought to appoint a secretary of state, maybe secretary of defense, you might want to have your team in place." 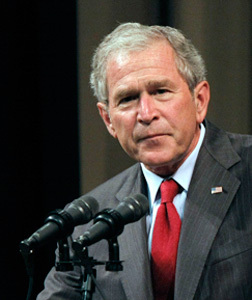 George W. Bush was a risk-taker. In the 2000 campaign, he mocked Al Gore for being too cautious: "If my opponent had been there at the moon launch, it would have been a 'risky rocket scheme.'" Bush took huge risks as President -- a big tax cut, a pre-emptive war with Iraq.

Like Bush, Walker's intellectual capabilities are being challenged. One columnist charges Walker with "an epic lack of inquisitiveness." A newspaper reports: "Two words ... voters do not use about him? 'Smart' and 'sophisticated.'"

Earlier this year, Walker made a series of embarrassing gaffes. He said that "the most significant foreign policy decision of [his] lifetime" was Ronald Reagan's decision in 1981 to fire the air traffic controllers because it showed how tough Reagan was. Walker seems to regard Russia as a gigantic trade union with nuclear weapons. He even equated public service unions in Wisconsin with Islamic State terrorists.

Walker has spent the last few months meeting with experts and boning up on foreign policy in order to enhance his credibility. To critics, Walker looks like a indifferent student cramming for his exams. He actually was an indifferent student who dropped out of college.

Sooner or later, Donald Trump will set his hair on fire and leave the campaign. That should help Walker. Both candidates style themselves as resistance leaders, determined to wipe out the entire Obama legacy starting with the Affordable Care Act and the Iran deal. Like Trump, Walker is a fierce opponent of immigration reform, though he supported it as recently as two years ago. "My view has changed," he told Fox News in February.

Like Trump, Walker offers himself to voters as "a winner." He said in Wisconsin, "America deserves a President who will fight and win for them." In his announcement video, Walker describes his Republican rivals as either "good fighters" who haven't won any battles or candidates who have won elections but "haven't consistently taken on the big fights." His point: "We showed you can do both." Walker named his political action committee "Unintimidated PAC."

Walker, whose entire political career has been in Wisconsin, is running as a Washington outsider. That's what George W. Bush did in 2000. Even though his father had been President, Bush's whole political career had been in Texas. He was not a member of Newt Gingrich's Republican Congresses that shut down the federal government and impeached Bill Clinton.

Bush ran on a promise to be "a uniter, not a divider." Walker can hardly do that. He is one of the most divisive figures in politics (and proud of it). The chair of the Democratic National Committee called Walker a harsh partisan who has "already brought the worst of Washington to Wisconsin."

There is one thing Walker has going for him. That is the well-established tendency for Americans to vote for a candidate who is completely different from the incumbent. Ronald Reagan, a strong leader with deep convictions, was the un-Carter. Bill Clinton, a man of extraordinary empathy who connected with ordinary voters, offered a sharp contrast with the out-of-touch George H.W. Bush. In 2008, Obama came across as smart, sophisticated and articulate -- the opposite of George W. Bush. If next year, voters are looking for the un-Obama, Walker's their man.