Bunion Surgery recovery is not as debilitating as it used to be. In my NYC bunion surgery practice, the prolonged use of casts and crutches is something of the past. Modern medical implants designed to hold the bones steady have allowed some surgeons to walk their patients right after their bunion surgery -- rather than be confined to casts and crutches. This can be done for bunions of all sizes.

Bunion Surgery Healing Time
Bunion surgery generally involves repositioning the maligned bones with a bone cut (osteotomy) and/or bone mending procedure (fusion). As such, the time it takes for bones to set/mend in the corrected position generally takes six weeks. Smokers and those in poor medical health may take longer to mend the bone. The biology of bone healing is about six weeks -- that time frame can't be made quicker. What can be changed is the disability that one experiences while the bone is mending.

When Is Walking Possible After Bunion Surgery?
Historically, the size of the bunion generally dictates whether or not a surgeon would allow walking. Smaller bunions have allowed walking in a surgical shoe whereas larger bunions have required casts and crutches. Larger bunions require more involved bone work, which lend itself to instability with walking pressure and therefore surgeons have used casts and crutches. Nowadays, technology and surgical experience have demonstrated that walking is indeed possible (casts and crutches are not needed) with specific techniques and specialized implanted surgical hardware.

What Is The Lapidus Bunionectomy?
Larger bunions are commonly treated with the Lapidus Bunionectomy, which involves realigned the displaced bone at its bottom, through a bone mending/fusion procedure. It is with this technique where the the walking advances have been made int he past decade. The Lapidus Bunionectomy has become a popular surgical method since surgeons have become more comfortable with mobilizing their patients post-operatively. Though not all surgeons who perform this procedure have adopted this postoperative protocol. 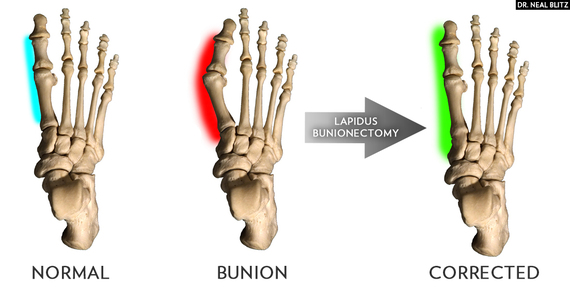 The Benefits Of Immediate Walking After Bunion Surgery.
As a foot and ankle surgeon who pioneered early walking after bunion surgery (Lapidus Bunionectomy), a surgeon with a patented bunion surgery implant, I have found the major benefits of weightbearing are as follows:

Technology advances have allowed for walking after bunion surgery despite bunion size, though the early walking program has to fit for both the patient and the surgeon.