Arrr you ready for this?

Former "Walking Dead" actor David Morrissey, better known as The Governor, may be busy nowadays producing and starring in an "emotional" and "exciting" new show, "The Driver," but it appears he hasn't yet closed his chapter on the hit AMC series. The actor is still constantly being recognized by fans today, speaks fondly of his time on the show and even has some behind-the-scenes secrets to divulge.

Here are five "Walking Dead" facts you might not know, according to The Governor:

1. A subtle Easter egg makes The Governor look like a pirate. 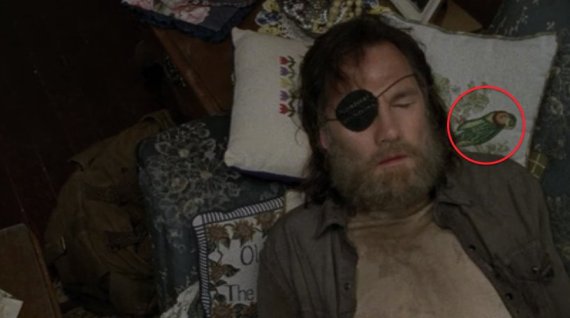 "The Walking Dead" is a show that inspires a variety of fan theories, including one that states the Governor is actually a pirate. When asked about it, Morrissey pointed out an Easter egg in Season 4 that takes the theory to a whole new level.

The actor told The Huffington Post, "There was one shot of the Governor, I think when he came back, and he was in his disheveled state with his beard and his hair when he was lying on the couch and a the cushion behind him has a parrot, which was by his shoulder, so that was always quite funny."

As for the pirate theory, the actor handled it diplomatically, saying, "I don’t really go off on any story but the one I know."

2. Zombies constantly need to reintroduce themselves to cast members.

You know those awkward moments when you're talking to someone and can't remember that person's name? Now imagine if that happened with everyone you met, ever. That's pretty much the experience of meeting the zombie actors out of costume, according to The Governor.

Morrissey explains: "[W]hen you're not working and someone taps you on the shoulder and says, 'You chopped my head off last week. I was the zombie in Episode 5,' and you go, 'Oh, yeah! Sorry, I didn’t recognize you,' because basically the zombies you never get to see outside of makeup, so when you see them it’s always a great surprise, and they have to actually introduce themselves to you."

Norman Reedus made headlines recently when he said that stories about him licking people have been "blown out of proportion." So is the cast truly safe from Reedus' affections?

When asked if he's been licked by Reedus, Morrissey said, "Many times. Many times I have to say." He continued, "I am the envy of most of my female friends because I can say I have been licked by Daryl Dixon. He does have that habit, and I have been on the receiving end of his tongue."

4. The cast gets bizarre gifts like eye patches and squirrel meat.

The "Walking Dead" cast members aren't strangers to unusual fan gifts. Because of his role, Morrissey explains his gifts tend to have a theme. "I have a collage of eye patches people send me all the time," said the actor.

Other strange cast gifts have included squirrel meat, random wedding invitations and even a breast implant.

5. The biggest threat on "Walking Dead" isn't the undead. It's the ants.

The actors have it pretty hard on "The Walking Dead" as far as shooting conditions go. Once, Morrissey even joked that he learned to hate "Mad Men" because the show's cast and crew got to work in air-conditioned studios. But as bad as it is for the main cast, the zombies have it even worse.

In addition the the layers of makeup and clothes, Morrissey told HuffPost about another problem he has seen the zombies face: "It was the hottest day I have ever experienced in my life, and this guy was buried under the ground, and I thought, 'God, that’s really strange. He’s got, like, leather trousers on,' and actually, what it really was, his whole legs were covered in ants. And this guy just -- they were everywhere -- and it was so strange, and then he just got sprayed down. And then he went back into the hole."

Bonus: The Governor is still open for a return.

The Governor famously made an appearance in Season 5 during one of Tyreese's hallucinations. When asked if he's making future appearances on the show, the actor said, "I don’t know is the answer," but, because he enjoyed the experience so much, he added, "To be honest, I would go down to Georgia and go to the set of 'The Walking Dead' in order to make them tea for an episode."

The Governor serving Rick Grimes some tea would be pretty hilarious, but perhaps rum would be a more appropriate choice ...

You can watch Morrissey's new series "The Driver" now on Acorn.TV. A new episode premieres each Monday through April 27.