Barry Jurgensen, the history teacher from Arlington High School in Nebraska, set out from Nebraska City on June 1st to begin his 500-plus mile journey to Chicago, Illinois. He's retracing the footsteps of two freedom seeking women who escaped the bonds of slavery in 1858. Barry's goal is to raise awareness about the continued existence of slavery in the U.S. and around the world and to raise money to fund human trafficking prevention education in schools. This blog will follow him all the way.

Robert: Barry, I was not happy to see Des Moines temperatures in the mid-to-upper 90's with humidity around 60%. I'm sure you were even less happy. How are you holding up? 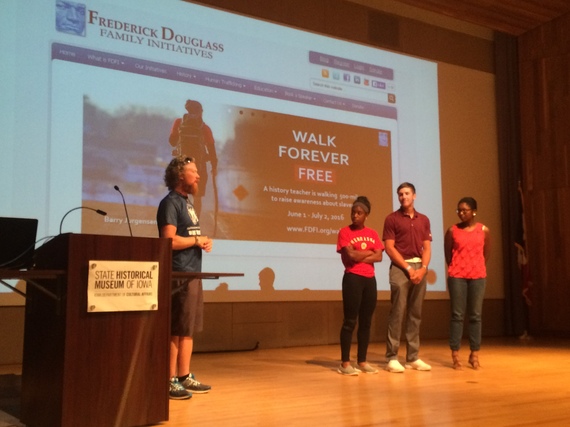 Robert: How are your legs?

Barry: Well, I was told I have bursitis. It's pretty painful. I also have three blisters on the heels of both feet. I spoke to someone about these little problems and decided to get new shoes. And, a walking stick.

Robert: Well, hopefully you rested a bit and had some fun at the State Historical Building of Iowa event today. 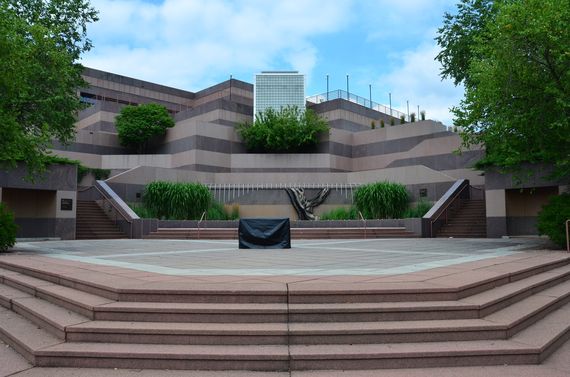 Barry: Yea, we had fun and got a hot shower too.

Robert: Senator Chuck Grassley wasn't able to make the event, but he sent a great a letter in support of your walk and the anti-trafficking work being done by groups all over the country. Here's an excerpt:

Celia and Eliza, the two freedom seekers who made the perilous 500-mile journey from Nebraska to Chicago in 1858, and whose thousands of steps Mr. Jurgensen is retracing, showed extraordinary courage in their effort to literally break the chains of their enslavement. Just as they persevered, we too must be courageous and steadfast in our commitment to end human trafficking, a modern day form of slavery.

Celia and Eliza were aided in their flight for freedom by ordinary Iowans who recognized that slavery was a terrible injustice. Iowans offered them refuge during their journey to Chicago and facilitated their escape. Over 150 years later, we stand with Frederick Douglass Family Initiatives and other modern day abolitionists in fighting sex trafficking.

Barry: I'm humbled by this event today in Des Moines, all the people that spoke so powerfully and everyone who came out to support us. I especially want thank my wife and kids and, of course, my colleague, Amber Sims, without whom I could not have made it this far. And, thanks to Senator Grassley for his kind words to me and for being a leader in the struggle to end modern slavery.

Robert: So, what are the next stops on the road to Chicago?

Barry: Mitchellville, Newton and Grinnell. Also, I just found out I'll be speaking at the Iowa Old Capitol Building in Iowa City.

Robert: Ok, who else is going to Iowa City? We'll see you down the road.