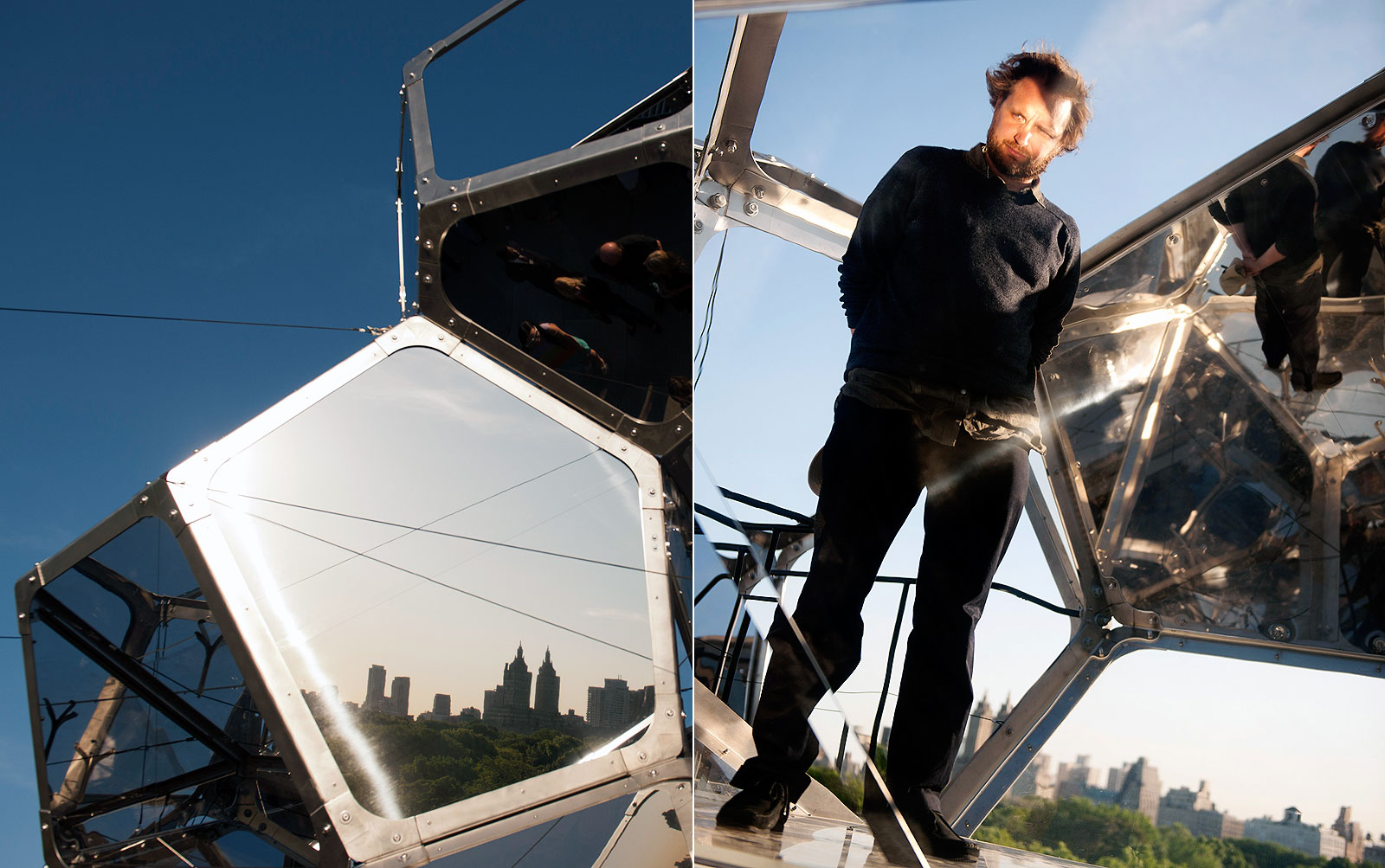 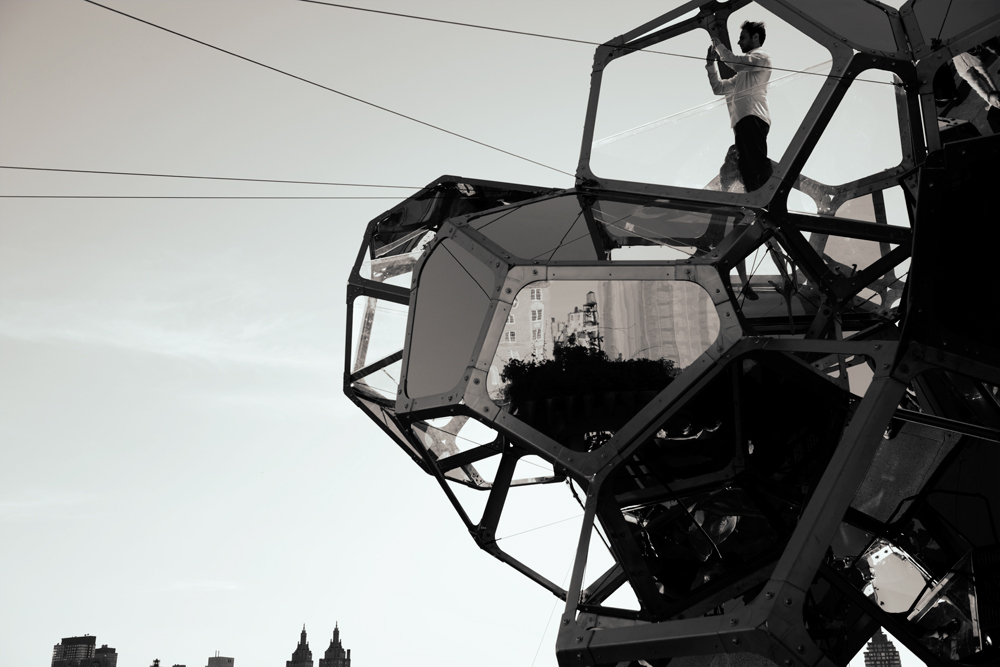 How would we adapt to aerial habitation? I asked artist Tomás Saraceno, contemplating his cluster of shiny pods like a gigantic multi-paned insect-eye perched on the Met's rooftop. The sculpture like a growth of molecules or cloud-fragment breaks off midair, and with a little push would scud across the sky like a cumulus.

Once we were tree-dwellers but preferring life as bipeds, began pacing on flat land. "Lewis Mumford wrote about the origin of cities, that it was first a necropolis" said Saraceno, "after burying people we would want to return." It was our wish to return to places to be close to people, that created cities. Agriculture followed.

The future is not necessarily technology-driven. "Now there is a company that takes the ash of dead people in capsules, launches a rocket and puts it in orbit," says Saraceno.

We stood at the topmost pod at sunset, looking down at the winding queue of people flocking to the cocktail bar, "We have gotten used to horizontal living. We will need time to adapt," I said. But things change quickly each generation, and Saraceno countered that, "In only a few years, our fingers' sensitivity for pressing between a 'p' & a 't' has become super precise."

Saraceno, a resident of Spaceship Earth believes we are already flying. After three months of study at a NASA-sponsored program at the International Space University, the only artist among 144 engineers, he was offered a zero-g flight. Was it amazing? I asked. The artist recalled excitedly, "I pushed myself to move to the other side of the plane, but it was like bang, I smashed into the other wall.  You have to be careful; you don't weigh anything and don't realize that it can hurt you."

With Gilles Clement, a life scientist at ISU, Saraceno intends to carry out experiments in the International Space Station. He wanted to scan a three-dimensional spider web. "I wanted to see how a spider would build a web in zero-g. The origin of the universe is sometimes explained as a three-dimensional spider web; how it formed through filaments of gases," he explained. 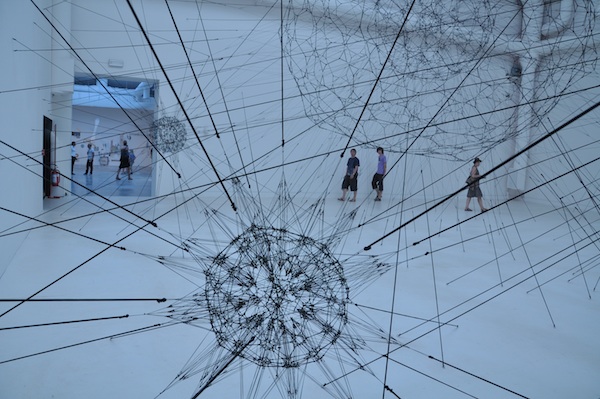 Tomás Saraceno, Galaxies Forming along Filaments, Like Droplets along the Strands of a Spider's Web, 2009 at Venice Biennale Photo: Kisa Lala 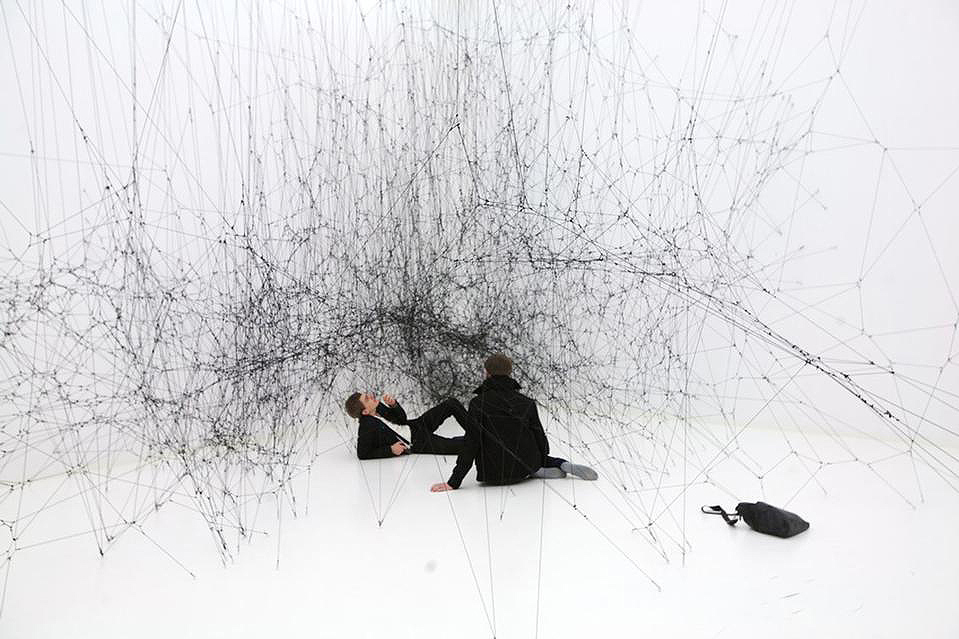 Walking between Saraceno's filigree of elastic tensors or on the curves and reflections of his inflatables while experiencing the buoyancy of others around -- is one way to imagine the cosmic fabric of free-floating cloud cities.

The utopic model of a suspended city was the dream of many visionaries from Jonathan Swift's Laputa to Gyula Kosice's The Hydrospatial City. Saraceno's contemplation of supra-terrestrial dwellings suspended in space bleeds myth and reality with sci-fi environmentalism. His flying cities could become mutating cosmopolitical urban hubs, a transportation system or an airborne chorus of vibrating strings. 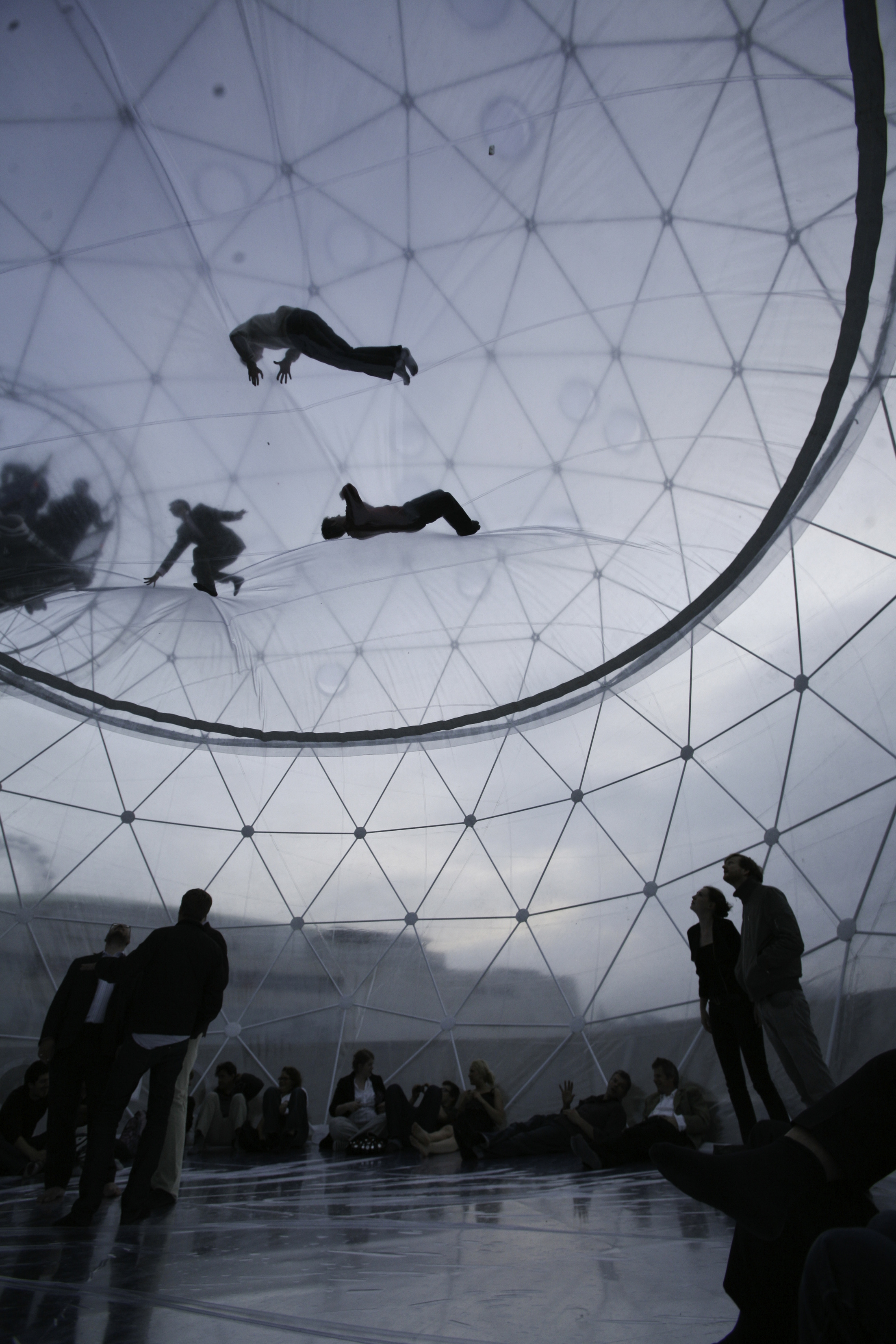 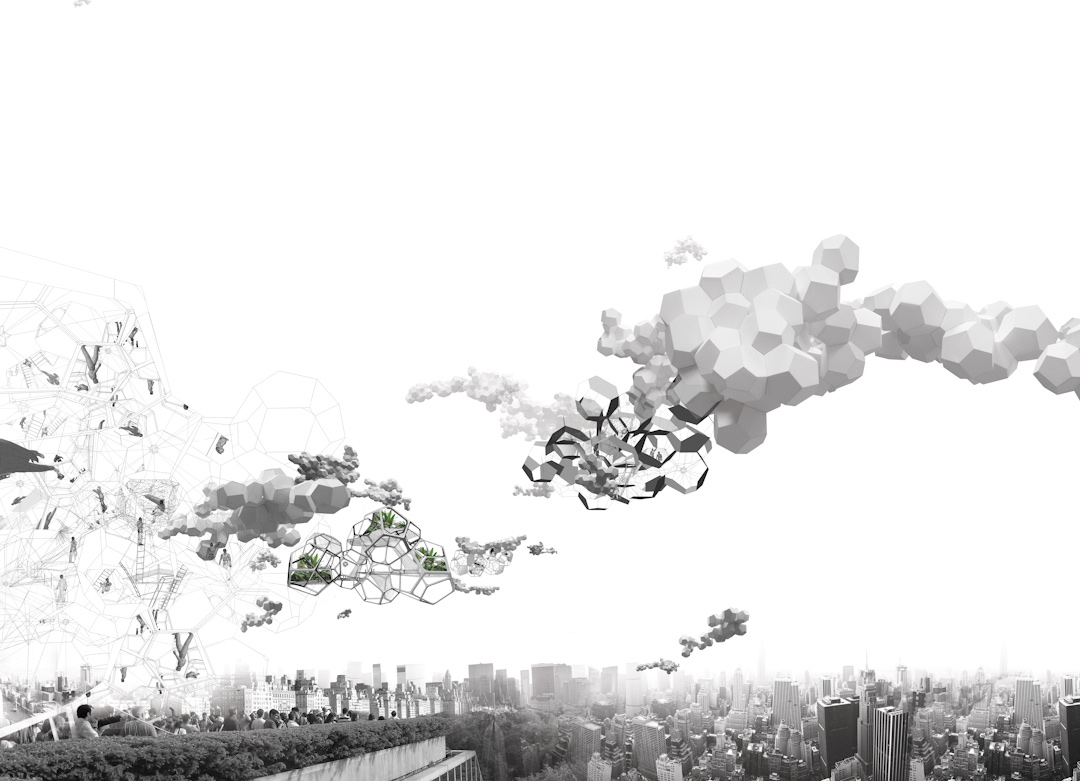 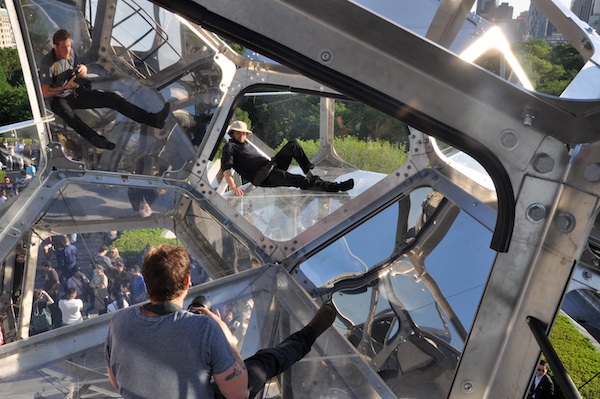 The web is dynamic, inter-connected, vibrational and synergetic. Yet our lives on earth remain constrained within socio-political geographical hierarchies.   Doesn't every path in the spider's web lead to its mouth? I tell him.

Saraceno believes that all such predator-prey relationships exist within larger contexts of cooperation.  He explains that his sculptures explore heterarchy, nestings of local hierarchies or webs that can become migrating cloud settlements.

"Most spiders are blind -- they know where the prey is in the web because of the vibration. That's how they orientate," he says.

Adapting to instability, co-dependency and accepting the ripple effects of our actions would be a new way of thinking for us. "The time you stand on [my sculpture], the dedication and concentration in observing a phenomenon really makes your life change."

First we need to dream of the impossible.

KL: I had just read about Girolami Maggi's 1564 theories on spatial disorientation, designing cities to disorient enemies. It plays with the idea of having parallel probabilities for any course of action.

TS: One of the ideas in general behind [my] sculpture was to disorient -- it's a new landscape to extend the possibility of moving through space while seeing more than one reality at the same time. If I was a butterfly or bee seeing with multiple perspectives, how would I be moving through that space?

KL: It's unfortunate that we can't alter the pathways between destinations, which are fixed by city planning. The spaces in between remain wild.

TS: I think of cities as clouds are today. How specific is a cloud? Sometimes we say in the art-world instead of being site-specific, it is cloud-specific. When you think of urban planning, architecture is always on the surface. What if we designed in layers and moved as clouds do, forming and reforming. We could think of being in transit from here to Europe, say in a cumulus cloud. Think of a rainy day, and what if we could rise to a higher plane and reach a level where it was sunny? 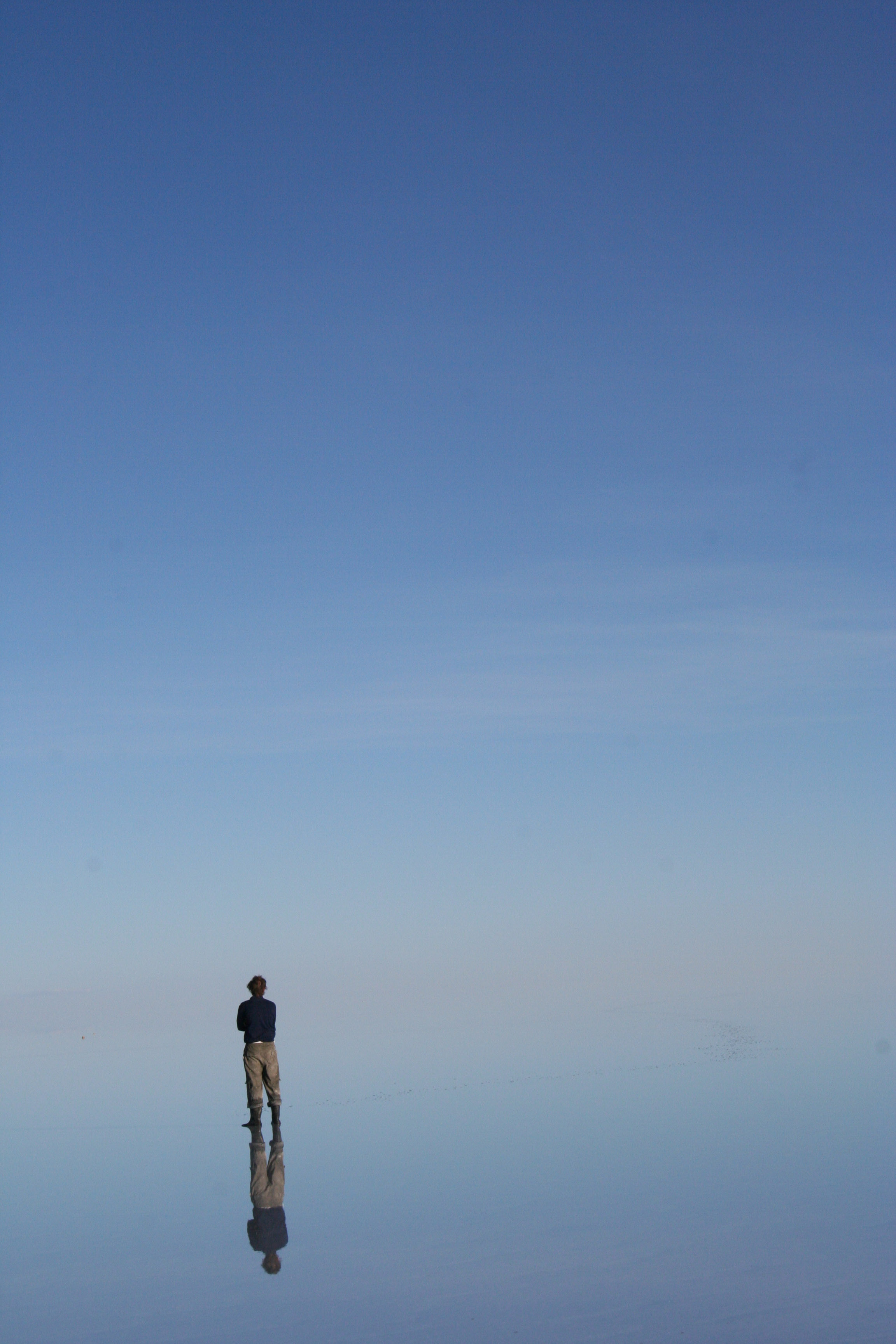 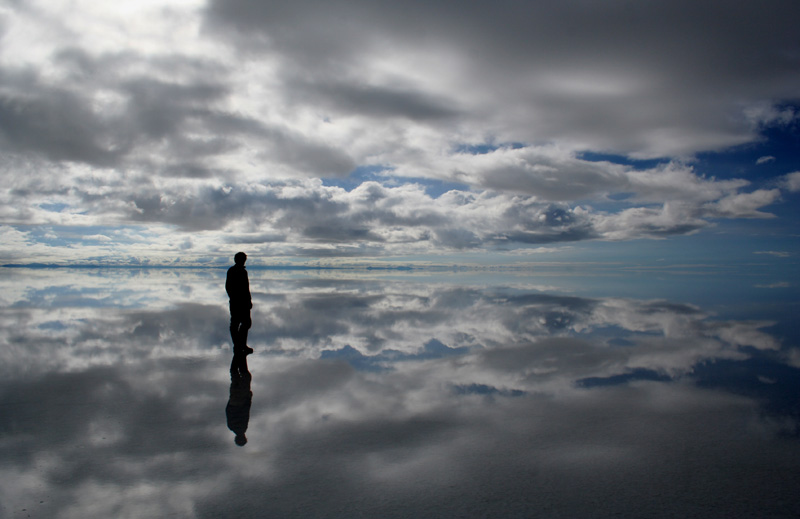 KL: Nomadic life is cool, but it's very difficult to stay off the grid like a gypsy -- if you enter into the wild spaces, you're criminalized. Have you tried living in a desert?

TS: I went to Bolivia's salted lakes. It is one of the largest sources of lithium for electric cars. The horizon appears blurred, so your relationship to up and down is less defined and your compass doesn't work because of the magnetic field under it. The stars are reflected in the water. Many of the positions of the mirrors in my sculpture reflect clouds; it's like stepping on clouds.

KL: Your sculpture is like an observatory. On certain dates above it the International Space Station is visible to the naked eye. I think of the Jantar Mantar in India, and of desert-dwellers being guided by stars. After the invention of the clock we've forgotten to look at the sky.

TS: I was invited to do an exhibit at the Jantar Mantar. I wanted my pieces to have a dialogue with the architecture. Two out of seven people now cannot see the Milky Way. Because we don't use it to orientate anymore we have lost the power to discern...we used to sail and orientate by stars; and also there's the light pollution of cities. I'm interested in solar clocks and telling time by the sun around Manhattan. Perhaps we can see sunspots reflected in the sculpture. The Incas and the Mayas always built around the geometry and relationship with the cosmos.

KL: Are you dependent on new technology for the structures you imagine? The  guerilla architecture of Archigrams, Superstudio and the inflatables of Ant farm lacked the materials you now experiment with.

TS: When you think of big flying structures, then the ETFE material is important, but I would never say the material is the constraint for why some things cannot be built. [If we desire it] we will invent the materials.

I'm interested in solar balloons: Aerogels are insulating materials for lighter than air technology - balloons, blimps, zeppelins, airships, that can control the temperature of the inside air. You don't need helium, [no wind is required] you have a tarp on top that you can open or close - and you can go up and down, even when it's cloudy. There are maybe ten in the world, and they're not expensive - I can give you DIY instructions. 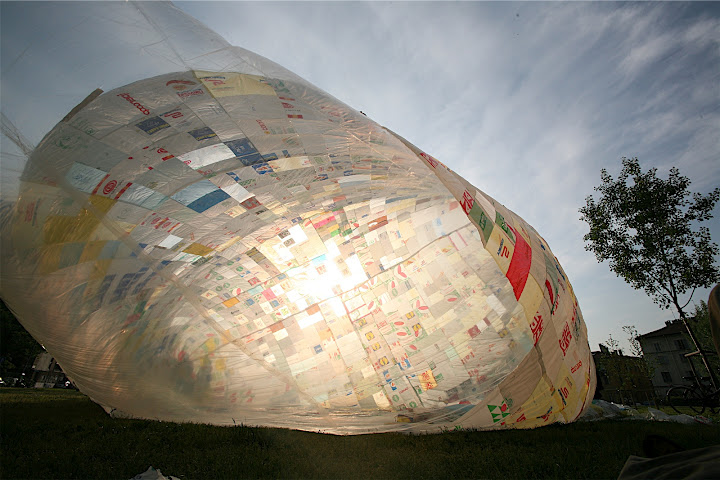 We lost interest in them [viable dirigibles -- due to hydrogen-leak disasters]. I was reading about a mechanic in a zeppelin, flying through the Jetstream saying how he could fly faster than any engine. If balloons become the normal habit on earth, it would improve things, and we would be forced to study the climate.

When Cloud Cities are in use, we will have learned to live on Spaceship Earth. To have the know-how to build a cloud city, you'll need to know the wind, weather and temperature. You have to change social-political systems. First we have to fix what we have here; then we can start to colonize elsewhere. We will build cloud cities the way the Internet and Wikipedia were built... 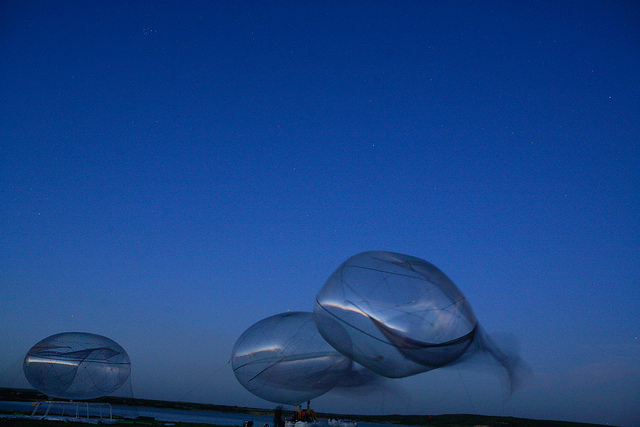 © Tomas Saraceno - Saraceno imagines his bubbles to have digital surfaces on which data can be projected and communicate to other pods. 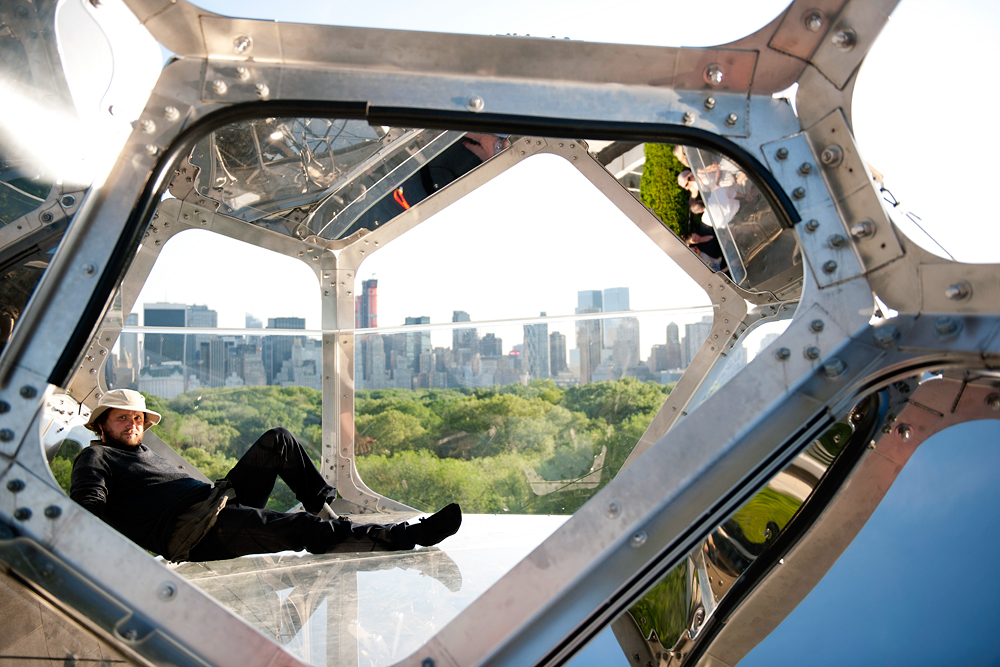