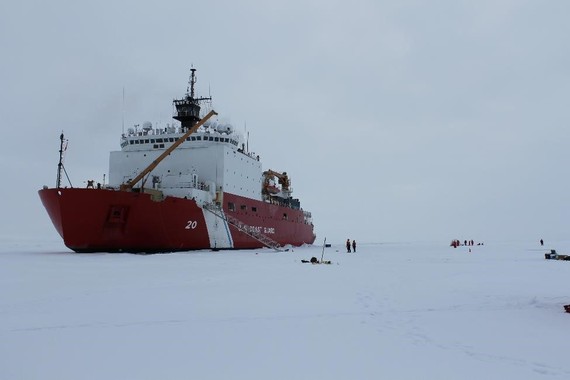 A view of the USCGC Healy from the ice. The U.S. GEOTRACES program sampled their first ice station on September 7, 2015 near the North Pole.

As I stepped onto the ice with feet wrapped in wool socks and insulated boots, my friend Pete pointed to the ground and said "there's two miles of ocean below us right now." The 2 meter thick ice sheet was covered with a fresh layer of snow and felt like terra firma rather than a fluid surface.

After weeks of searching, the USCGC Healy has finally encountered ice floes large enough to safely occupy. Our goal was to sample 10 ice stations, however, as of September 15 we have only completed 4 and our chances of sampling more will decrease in the coming weeks as we move south towards open water. The ice we have encountered is surprisingly thin, pocketed with open leads and first-year ice rather than the solid multi-year ice we had anticipated. It's likely that wind and surface currents pushed thick multi-year ice towards the eastern side of the basin beyond the extent of our cruise transect. However, thin ice in the western Arctic could also be a sign of decreasing ice cover. Ice extent in the Arctic has been decreasing by an average rate of 11% per decade since observations began in 1979; this winter the lowest ice extent in history was measured by satellite imagery just five months before our expedition began. Scientists predict that summers in the Arctic Ocean will be ice-free by 2080. Complete loss of ice in the Arctic Ocean each summer will significantly change the habitat of many marine mammals and potentially alter major geochemical cycles in the basin, including the cycling of toxic metals like mercury.

Many trace elements and nutrients enter the ocean from the atmosphere as rain, dust or snow, and gases like elemental mercury and carbon dioxide cycle through the air-sea interface. Sea ice can alter the chemistry of elements deposited from the atmosphere and temporarily shut down or slow gas exchange. The ice is also alive - when seawater freezes salt is expelled and brine collects in channels favored by bacteria. Sunlight can penetrate through the ice and support algal growth, especially at the bottom of the ice where light is supplemented by nutrients in the underlying water. Sea ice plays an important role in chemical and biological cycles of the Arctic Ocean and we are studying these interactions to better understand how the basin may react to decreasing ice extent in the future.

At each ice station a steep metal brow is lowered from the ship and the crew completes a survey of the floe, outlining a safe work area with bright orange cones. At our first station the Coast Guard ran through a series of drills, jumping into the icy cold water to practice different rescue techniques. There are always at least three Coast Guard members on the ice for rescue and two with rifles for polar bear watch. Our sampling gear is craned onto the ice in large pallet boxes with two sleighs that we use to move samples across the floe.

Each ice station takes about 8 hours to complete and there are multiple groups collecting samples concurrently, some scientists work in 2-3 hour shifts but many remain on the ice for the entire duration. A titanium coring device is used to collect ice for trace-element analysis. The ice cores are sealed in plastic tubes and transferred to the ship where they are sectioned in a walk-in freezer that has been modified to serve as a clean laboratory. A second coring device is used to examine the physical and biological characteristics of the ice, these parameters are less prone to contamination so trace-metal clean procedures are not needed. Melt water directly below the surface and seawater as deep as 20 meters is collect through a hole drilled in the ice. Surface snow and melt pond water is collected and along with the ice cores and under-ice water will be analyzed for the same trace metals and elements measured in the water column. 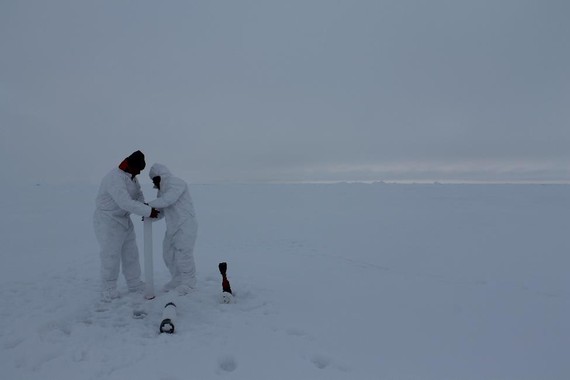 Dr. Anna Aguilar-Islas and Dr. Rob Rember from the University of Alaska, Fairbanks wear Tyvek suits and special gloves to collect ice cores that will be analyzed for contamination-prone metals. 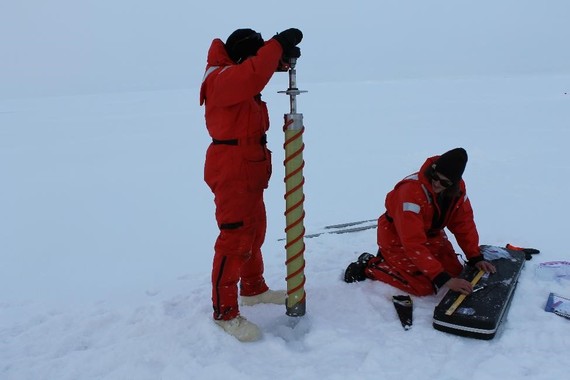 Dr. Carl Lamborg from University of California, Santa Cruz and graduate student Kyle Dilliplaine from the University of Alaska, Fairbanks collect ice cores to study physical characteristics and algae. These samples are less prone to contamination and do not require the stringent trace-metal clean techniques pictured above. Carl and Kyle are wearing insulated Mustang suits to prevent hypothermia during long exposure to cold temperatures, a required garment for working out on the ice. 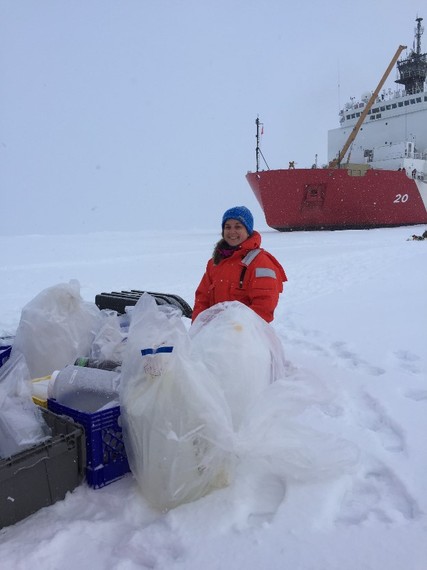 Organizing sample containers to collect melt water and seawater from a hole drilled in the ice (that's me!) 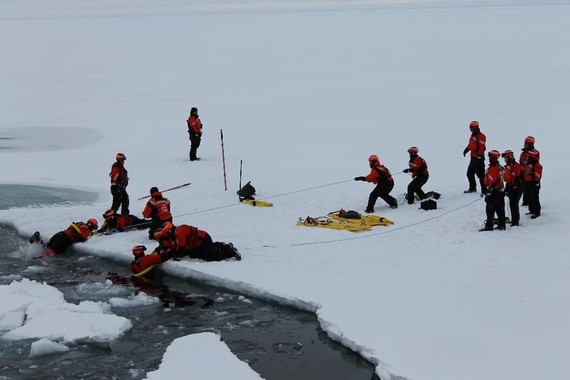