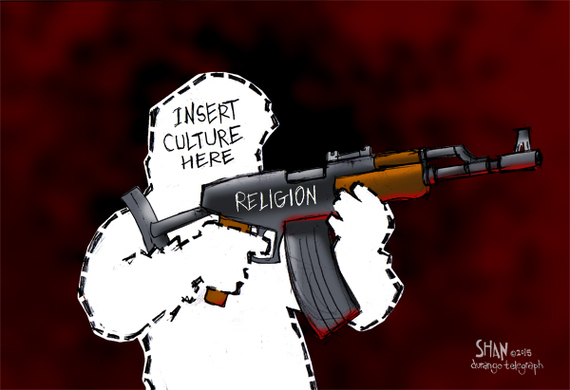 In the wake of the Charlie Hebdo attacks, voices far and wide have been denouncing the Islamic extremists who perpetrated the attack as "not proper Muslims." While I might argue that the terrorists were not proper humans, I can't argue they weren't "proper Muslims" because there is no way to measure that. Religion is not quantifiable. There isn't a proof, as in mathematics. There isn't empirical evidence, as science provides us. There is only a decision to worship something unseen, unknowable and unmeasurable. Now, that's really a pretty irrational thing to do, and there is no rational way to know whose irrationality is more authentic.

Debates over religion are like watching two people argue over which one is the most proper giant, green frog. They both believe something ludicrous, so who can judge whose delusion is "more proper." Of course, if one pulls out a gun and starts blasting away, I could certainly make a judgement on which person is more homicidal, but that's a concrete assessment based in law and culture, easy to see and, hopefully, avoid.

The problem begins when a human mind decides to accept irrationality as rational. It begins with a declaration of faith that is, ironically, perceived by the faithful as a turning point in their lives. I say ironic, because what believers view as a profound discovery about reality... is actually a profound departure from it. Once a person has so radically breached rational thought as to say: "There is an invisible entity who controls and creates everything, and I need no proof of this, because I feel it in my heart," anything is possible. Walking on water? Sure. Living on air? Yup. Enjoying 72 virgins after death? Gimme some of that!

And, of course, once a person becomes convinced that their delusion is the right one, everyone else's delusion has to be, by definition, wrong. Tolerance of "incorrect belief" ranges from indifferent to genocidal.

At this point, I can hear readers of faith saying: "But you can't blame religion for murder. People kill whether they are religious or not!" Certainly, they do. But religion is one the most insidiously lethal accelerators of violence this side of an unfaithful lover. And it doesn't just inspire singular crimes of passion. Religion motivates entire countries to declare righteous war. It inspires vast movements to enshrine and promulgate illiteracy. It makes humanity weak, violent and stupid.

Now, yes, of course, in ages past, religion has been the dominant force driving profound enlightenment and great architecture and art. True. In the past. We no longer live in the past. We are now enlightened. We now know that black people are human beings, that the world is round and the sky is not a vast quilt poked full of holes to let in the light of heaven. We've grown up. We've learned who we are and where we came from, floating on this frail and fleeting blue speck in a immensity that beggars imagination.

And, yes, many civilizational advances have been fueled by faith. But we don't need it anymore to continue advancing. I could gather millions of people to march for justice, equality and civil rights and never once mention Christ, Mohammed or even religion of any kind.

Humanity cannot afford religion because the seed of our destruction is so easily sparked within it. One only has to invoke (your deity of choice)'s will, and any perversion, violence, hate, act of barbarity or destruction can be engaged in without thought of conscience, or consequence.

This century, various branches and sects of Islam have become virulently destructive. Last century, (and many would say that it's still happening), it was parts of Christianity that were murdering in the name of its "King of Kings." Next century, maybe it will be Judaism, Hinduism or Buddhism. How much more? How much longer must we kill ourselves in the name of a fairy tale? How much longer must we kill each other arguing over who's the better giant green frog?

We can no longer afford the emotional crutch of a supernatural parent figure so that we feel loved. We must leave the nest...accept our own faults and triumphs for what they really are -- our own actions, executed by us, for us, at our own will. And for everything else, it's just pure, unadulterated luck, good and bad. Sorry.

If the CERN particle accelerator shows us the very nature of reality, of existence, is really nothing more than random mathematical permutations in the fabric of the cosmos, we should rejoice in that knowledge. Not throw a tantrum because daddy isn't there to tuck us in.

We can tuck ourselves in.

And, hey, isn't that cool we can build a particle accelerator? Now that really is miraculous.