It's Thanksgiving time once again, and our tables will be filled with delectable dishes, many of them made with ingredients grown on American farms.

As someone whose job it is to know as much as possible about where and by whom food is farmed or raised, I cannot celebrate this season without thinking about the farmworkers who made it possible. In that spirit, I'd like to share my professional and personal experiences in the battle for farmworker rights.

The Coalition of Immokalee Workers (CIW) is a community-based organization of mainly Latino immigrants working in low-wage jobs throughout the state of Florida. Immokalee is where 90 percent of the tomatoes sold east of the Mississippi in the winter months are grown. They have successfully partnered with the likes of McDonald's, Subway, Whole Foods, Burger King, Taco Bell, and Trader Joe's to ensure fair working conditions and wages.

Despite this, the CIW is currently under fire from Worker Center Watch, a pseudo-industry group that is claiming in a letter to the Florida Attorney General and others that the reason such well-known brands are signing onto the CIW's program is primarily "to remove them as a CIW protest targets."

I can tell you unequivocally that Worker Center Watch's claims could not be farther from the truth. How do I know? I'm part of that "industry" they claim to represent -- I'm a food service executive responsible for over $75 million per year in produce purchases. In that role, I brokered the first partnership with CIW by a food service company.

I was invited in April 2009 to visit Immokalee, FL, by the CIW. I saw for myself the extreme physical conditions in the tomato fields: no shade, soaring temperatures, and workers running with buckets on their shoulders -- buckets that are required to hold at least 32 pounds of tomatoes per round. (Interestingly, workers claim that they are often pressured to overfill the buckets, despite grower policies requiring that they not exceed 32 pounds lest the tomatoes get crushed under the weight or fall out of the bucket, becoming damaged. Talk about a catch-22).

I had a realization there in that field: We had to get involved. We had to try to somehow make a difference.

So, we partnered directly with the CIW and forged a new agreement that frames acceptable working conditions and enforces those conditions with a strict code of conduct. Among the issues addressed are fair wages, worker empowerment, worker safety, and third-party monitoring. We've also signed on to be part of CIW's Campaign for Fair Food.

But, as proud as I was and am of our contributions to the cause, I've long wanted to pledge my support in a more personal way. So when my colleague Cheryl said she was joining the CIW's March for Rights, Respect and Fair Food, I immediately said "I'll go with you!" with great enthusiasm... and not much thought.

Next thing I knew, I was packing hiking boots and a sleeping bag.

Walking the Walk
A core group of about 50 marchers, including Coalition members, college students, and community activists, made the entire 200-mile journey from Immokalee to Lakeland, FL; they were joined along the way by hundreds of supporters doing a leg or two of the march, like us.

When Cheryl and I hooked up with the group, they were in the middle of a ceremony marking International Women's Day, sitting in a circle under trees draped with Spanish moss and listening to a haunting guitar melody. One by one, people walked to the center, deposited earth into a ceramic pot, and spoke the name of a woman who had inspired them. After each name, the group responded "Presente," acknowledging that the spirit of that mother, grandmother, daughter, or friend was present. Tears streamed down people's faces, and I felt myself choke up when it was my turn to let go of the cool soil.

I was ready to march.

"Two by two, two by two" shouted members of the security team as we lined up behind a flat-bed truck carrying a DJ who was blasting music to march by. Much to my surprise, it turns out that if you're a big group marching 200 miles, you actually walk on the highway behind a police escort. Staying in a tight line, shoulder to shoulder with the marcher next to you, is critical for safety. The group moves as one, everyone walking at the same, constant speed. Traffic stops for you, not the other way around. 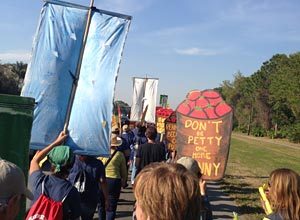 As my feet started to literally pound the pavement, I was glad that I had chosen a small flag to carry rather than a large banner. The strong breeze provided a welcome cool, but it also made the large signs bob and wave. I marveled at the strength of four women carrying a life-sized statue of farmworker holding a bucket and announcing a "Nuevo Dia, New Day" for "Derechos, Rights." Mile after mile, they hoisted the emblem of justice. As Gerardo Reyes-Chavez, one of CIW's leaders, explained to me, "At first you feel the weight but soon, you forget the burden." I thought to myself, "That's why you can do this work. You forget the burden of the journey and focus on the goal."

Gerardo also remarked that mine and Cheryl's joining the march was "historic." Never before had anyone from a purchasing company walked alongside the workers demanding change. I have to say, it didn't feel like our contribution was the historic part of the day. What felt most meaningful to me was the expression of our collective constitutional rights. Never before had I so dramatically seized my right to assemble and exercised my right to free speech in service of others' pursuit of life, liberty and happiness.

What We Have In Common
As we walked, drivers responded to the plea to "honk for justice." Each time I heard the blare of a horn, I held my flag higher and walked a little taller. People came out of stores and restaurants along the route to wave. When I saw a man in a camouflage baseball cap flashing the peace sign out the window of his gigantic pickup truck, I thought about how we are more similar than different, more aligned than apart. These farmworkers, that truck driver, me, all people who want to be treated fairly. As Gerardo said at the start of the march, "Even though we may be poor, we too are human beings. We deserve respect and dignity."

Hour after hour we walked, stopping periodically at parks for rest and refreshment. Then we'd return to the road. We chanted and we danced. At the end of my first day, I found myself toward the back of the human train, dancing with a college student. That evening, we were welcomed by one congregation for a fish-fry and then by another for shelter. Cheryl and I rolled out our mats and tried to make the church's rec room floor as comfortable as possible. 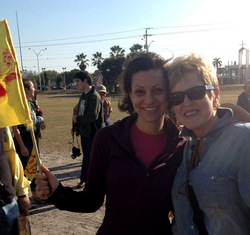 At 6 a.m. it was time to get up and get ready to do it all again. Day two was harder on the body. I had blisters and the heat was oppressive. I also struggled mentally with boredom. The Florida highway we marched along was lined with fast-food restaurants and, oddly, furniture store after furniture store. The music blaring from the truck was upbeat but also made conversation impossible. Though I was surrounded by people, I was alone with my thoughts. My mind wandered and spun. I had to consciously bring it back to why I was there. When I focused, I found myself very grateful for the opportunity to lend my body in support of these workers. I often fought back tears.

That day's route ended at The New College of Florida. The beautiful old buildings of the school sit right on the water. We rolled up our pants, took our shoes off and waded into the warm bay to soak our tired feet. It was heavenly. Peaceful, joyful and much more than I ever could've imagined I'd gotten myself into.

Giving Thanks
Upon hearing about Worker Center Watch's misguided attempt to defame the CIW -- and given that this is the season for being thankful -- I realized how grateful I am to the CIW for their work on behalf of American farmworkers. From my experience marching in April to the numerous interactions I've had with them over the last 4-plus years, I know that, despite Worker Center Watch's spurious claims to the contrary, the CIW is motivated solely by the belief that everyone deserves to be paid fairly for their work, treated with respect, and protected from toxic work environments.

So, as we sit down this Thanksgiving and again at the holidays and enjoy the fruits of American farmworkers' labor, I ask that you consider getting involved in this cause. By visiting the CIW's website via the link below, you can find out ways to take action directly and join me in truly walking the walk on farmworker rights -- which after all, are really just human rights.