Rated among the 15 best treks in the world by National Geographic, one anticipates a great deal in walking across southern Jordan to Petra. Seven reasons why this section of the Abraham Path still exceeds anyone's expectations.

On the King's Highway towards Dana village there are still patches of snow, remnants of a storm two weeks ago that closed off parts of mountainous Jordan from the rest of the country. But spring has commenced. From breakfast at the Dana Lodge, we descend 900m, seven hours and four ecosystems into Wadi Dana. This is Jordan's largest nature reserve and one of the few where you can hike both independently and with a guide. We wander past granite rock formations, limestone, and sandstone cliffs. The wadi is pristine, its trail rocky, then smooth, then overflown with a stream that carries away the last melting snow from the 1600m ridge above us. Dana hosts 700 plant species, 200 kinds of birds and 40 types of mammal: not the diversity you would associate with the Middle East. 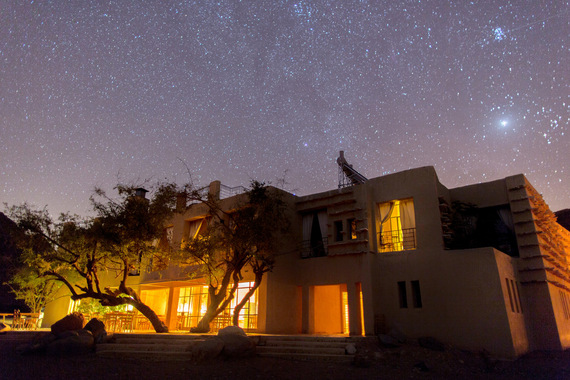 We end our first day at Feynan, arriving at the point where Wadi Dana opens up into the Araba Valley: the middle of nowhere. I heard much about Feynan Ecolodge before, as one of Jordan's most inspiring, off-the-beaten-track places to stay in Jordan. But there's nothing like the special feeling of entering someplace unique after a day's journey on foot. The lodge is entirely off the grid and powered by the sun for its core needs; the 26 rooms and restaurant use less electricity than one city apartment in Amman. Hundreds of locally made candles light up at night. Every detail and every color belongs. Staffed entirely by locals from the area, 80 Bedouin families benefit from preserving nature and their own culture at Feynan.

After the sun sets, the evening pastime is stargazing on the rooftop terrace. Suleiman is the master of its larger-than-life telescope. With his green laser pen he points out how to navigate one's way from one constellation to the next. In eloquent English he instructs us: "Follow the Big Dipper and draw a line that extends five times from the distance between the final two stars. There: you arrive at the North Star. Oh, and this is where I was born", he points his laser to a cave about four hundred meters from the lodge, "and where I live now", shifting the green beam to a Bedouin tent one hundred meters further. He then reprograms the telescope. "Here are the rings of Saturn. There, the four moons of Jupiter." Peddling through time and space, Suleiman hosts us between earth and sky.

3. Walking the Rim of Mt. Safaha 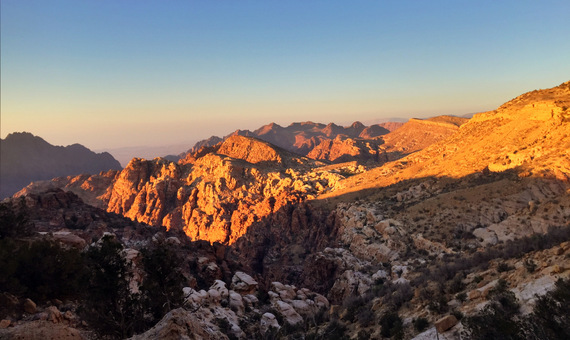 Many travelers know Jordan is abundant with remote wilderness, but few places will have such shifting vistas as the landscapes on this trek. On the rim of Mt. Safaha for some eight hours, one epic set of scenery unfolds after the other. There is no lack of amazing scenery across the other 1000 plus km the Abraham Path presently features across the Middle East. But I have not walked any region where the land shifts so dramatically at every turn as between Dana and Petra. 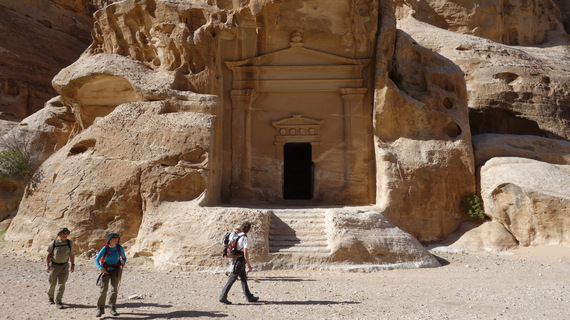 Few visitors to Petra take the time to visit Petra's smaller sister. Seven km north of the main city, Little Petra is secluded in the Siq al-Barid or "the Cold Canyon". Cold because little sunlight can penetrate the backside through which we enter and descend past carved temples and villas, following a maze of rock-cut stairs winding up the cliffs without beginning or end. In Nabatean times, trading caravans stopped here, with their masters refreshing themselves before visiting the larger city for business. Two millennia ago, this region was the epicenter of cosmopolitanism, the New York City of its era: crossroads of art, trade, and a mind-blowing blend of classical architecture. One villa still features a rare painted ceiling in which a lush tree hides a winged cupid with bow and arrow. Walking trails, however narrow and nimble they are on the map of human activity, have this amazing ability to connect the hidden gems. 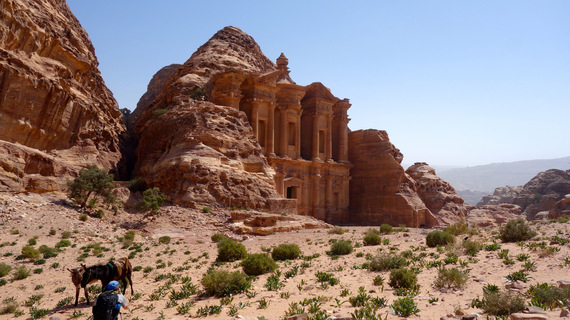 The trail between Little Petra and Petra takes us past small sand dunes and mellow green patches of winter wheat, followed by a Bronze Age settlement, steeper cliffs, and then, the city of Petra, member of the New Seven Wonders of the World. Visitors entering Petra the traditional way -from the village of Wadi Musa through the Siq towards the Treasury -- experience a blend of amazement and déjà vu. Yes, it is amazing, and yes, you have seen it many times before: in a dozen movies, videogames, novels, and thousands of travel magazines and guidebooks.

We enter through an alternative route, a "back stage" entrance into Petra. No déjà vu for us. (A practical note is in order here: you do need to have entry tickets pre-arranged). We walk from up high on the flanks of Mt. al-Deir towards the Monastery. This is Petra's largest monument, its iconic urn visible from afar. Few sights in the world can be more rewarding after a few hours of walking. The dimensions are incredible: the doorway is taller than a house; the urn on top over 10m high. In front of the Monastery we sit down for tea and philosophize on our journey these past days and how the world can get familiar with the other face of the Middle East. We come up with a long list of travel and film celebrities who should make the foot journey we have just made. 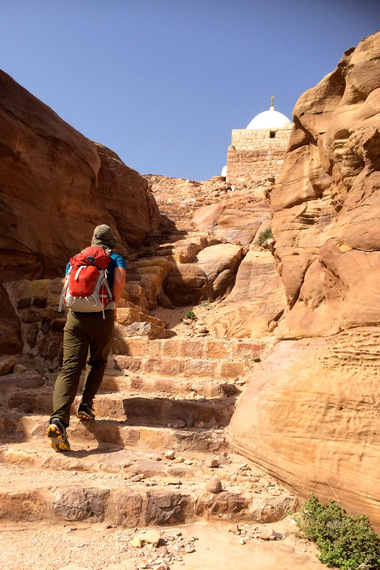 "Maqamaat", holy shrines situated on mountain tops have always fascinated me. On top of the highest peak in the Petra region sits the Maqam of Haroun, Arabic for Aaron, the brother of Moses. It is visible from many of the cliffs nearer to Petra: a bright white dome on top of a distinctive mountain peak, a sacred place for the Abrahamic faiths. According to tradition Aaron was buried here. There are competing narratives on locations elsewhere in the Middle East, but pilgrims have climbed up here for centuries. It features Byzantine ruins, large water cisterns, and a set of beautiful steps up to the highest point of the Maqam.

Just before our final ascent, we reach a plateau with a small house. A local police man stands guard here. His duty is lonesome: he stays put for a week on the mountain and then is released by another officer. He invites us for tea, and we talk. His middle and last names are Salaam, "peace". Through a cracked screen on his phone he shows us pictures of the snow that he was in just two weeks ago. Only a trickle of people now pass each day, sometimes no one. A year ago there were dozens. These are tough times for tourism in Jordan. He seems content we're making it up the mountain and advises us an ancient path to take back. I give him my Abraham Path passport and he signs in Arabic: "Jabal Haroun, 8 March 2015".

7. The Bridge on Foot

For long Jordanian tourism has struggled with the question of how to bridge the gap between its very solid safety record and security perceptions in the rest of the world. There is a group that is literally bridging that gap with their feet and they deserve more attention: a wide collective of Jordanian outdoor leaders and explorers have come together to create the continuous 600+ km Jordan Trail connecting the forested hills of Um Qais and Ajloun in the north to the spectacular deserts of Wadi Rum and Aqaba in the south. The Abraham Path follows and supports this route, of which Dana-Petra is one spectacular section. Jordan's hiking scene is homegrown with thousands of members and developing rapidly as its leaders are sewing together the best that the country has to offer in people, nature and cultural heritage. They are laying the basis for a new kind of tourism in the country: slower, fairer, more enriching. And they are drawing on a crowd that is more resilient to the frenzy of Middle East geopolitics than conventional tourism.

On our way back from Mt. Haroun, we finally pass Petra's movie star icon of the Treasury, traditionally the first site visitors drop their jaws at. Opposite is a cliff with high up, at its very edge, a small tent. Here one of Petra's most amazing rock climbers hovers far above the tourist crowds. My friend David calls him "the Mystic Bedouin". When the Dana-Petra route was explored last year, the team took a winding footpath up the cliff and asked about any direct ways to the Treasury below him. His answer: "if you open your mind there are many ways." 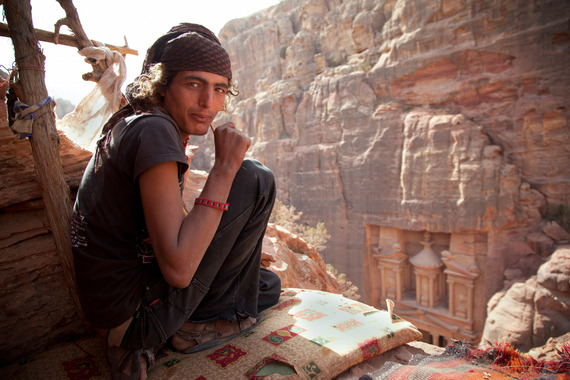 Dana to Petra can be walked in 4 (very experienced hikers only), 5, or 6 days, or parts of the trail for those with less time. The walk is possible both independently, and with guides and luggage transfers. Options for lodging are varied between luxury ecolodges, Bedouin tents, wilderness camping and guesthouses/hotels in Petra. Elaborate details on the walk (maps, GIS, tour operators, site descriptions, etc.) can be found at abrahampath.org/path/dana.