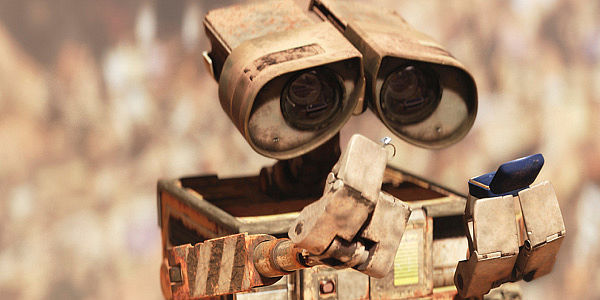 As I waited in line on opening night on Friday to see Wall-E, I thought it would be something of a robotic version of Nemo. Having loved Nemo, I was excited to detach from my work-week stress load and calmly watch the movie.

Little did I know I was in for one of the most moving, gorgeous, and dare I say "important" movie experiences I can remember in a long, long while. This movie is a blatant and powerful indictment of our environmental destruction, and it is also a completely entertaining and warm love story. I humbly encourage everyone to see it.

**While this will be a glowing review, please scroll down to read my two complaints about the film as well.

Wall-E is the last remaining trash-collecting robot left on an abandoned planet Earth. He roams the smoggy, trash-covered landscape of our destroyed planet, crushing refuse and hanging out with his only friend, a plucky cockroach. But Wall-E has a video of Hello Dolly that he watches on endless loop, and he longs for something more: singing, dancing, and inter-personal (or inter-machine) contact. In short, he is love-sick.

Where have all the humans gone? We learn that they were forced to flee their dying planet over 700 years ago in a huge space-craft called The Axiom. On the ship they have become obese, immobile blob-beings who can only sit in their spaceship deck chairs and consume what is shown to them on their personal video monitors. The scenes on the Axiom are scarily reminiscent of present-day Las Vegas: the over-fed humans are detached from their daily cares and are free to sit on their backsides, consume, and be constantly entertained.

I won't spoil the plot for you, but let's just say that a beguiling robot named Eve comes from the Axiom down to Earth in search of life forms. She and Wall-E meet and indeed find a little sprout of a plant growing in an old boot. Life blooms on Earth, love blooms for Wall-E and Eve, and great changes befall the humans quietly sipping their smoothies on the Axiom.

But I do have two beefs with Wall-E:

+ Why did Pixar pass up the opportunity to help people learn what they can do to become better stewards of the planet?? The movie is an inspirational environmental call to action, and yet there is no mention of how or where people can learn to cut carbon emissions, save water, reduce their trash production, etc. Why didn't Pixar put up a simple screen with "ten recommendations for loving planet Earth" at the end of the film -- or a link to a site with educational information? It pains me that MILLIONS of people will see this movie and learn nothing about what they can do to save the planet!

+ I also find the message at the end of the film a bit troubling. The humans return to Earth and it seems as if everything will just be hunky-dory. Yes they have some clean up to do, but it won't be that bad. I was sad to see that Pixar took this easy out; we don't need to be telling Americans that our environmental practices can be swept away with some kind of simple big broom.

Please share your comments on what you thought of the movie!