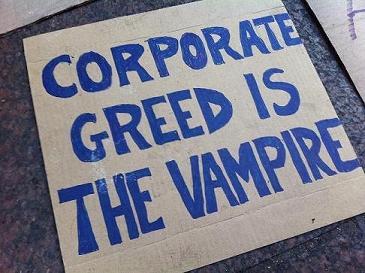 As the Occupy Wall Street enters its fourth week, the meta-narrative around the rapidly spreading movement is beginning to take shape. From CNN to Fox News to many protestors themselves, one central slogan is sticking: corporate greed.

During an inspiring visit to Zoccutti Park, we saw abundant posters with slogans like "Another Mother Against Corporate Greed" to "Corporate Greed is the Vampire."

OWS has historic potential. It's already succeeding in raising questions typically buried by the mainstream media. We want it to gain power fast, but much will depend on how its core message gets framed. As linguist George Lakoff argued in his seminal book Don't Think of an Elephant, "frames" have enormous power.

Unfortunately, smashing "corporate greed" is not only limiting, but we fear it's bound to fail. The "we are virtuous, you are evil" message is admittedly, a great way to get people fired up. But does it get us where we need to go?

Recall, by contrast, the Civil Rights movement. Dr. King didn't rail against the racists; he demanded the end to laws that allowed racists to damage people. Going to great lengths not to demonize foes, he called on Americans to live up to our own ideals.

And, on a deeper lever, is greed really the problem?

We don't think so. A greed frame diverts eyes from the rules that have enabled all that nasty greed free reign. Surely our species should know by now that not just a few of us but most of us will behave badly given the right -- i.e. wrong -- conditions. Think only of "ordinary, family-loving" people taking part in mass murder and torture, from the Holocaust to Abu Ghraib to lab experiments in which everyday people -- most, not a small minority -- have acted in ways most of us also find horrifying.

Before the banking debacle, would those who devised and pushed toxic derivatives have scored noticeably worse on a greed scale than any of us? Probably not. It's just that they were set up with precisely the conditions proven to bring out greed and recklessness, big time.

So let's call the crisis what it is: the rise of privately held government.

It's happened in part because for decades Americans have been told, and too many got swept up in the fairy tale, that we have to turn over our fate to a force that works on its own without us: the market. It's "magic," Ronald Reagan assured us, is all we need.

Once we buy that notion, we're done for, for wealth accrues to wealth to wealth until we end up with a society that a 2005 Citigroup report famously dubbed a "Plutonomy," in which the top 1 percent control more wealth than the bottom 90 percent. And an America where inequality is now greater than in Pakistan or Egypt, according to the World Bank.

And we've allowed that tight economic grip to buy political muscle: From warfare to healthcare -- in our privately held government -- corporations sway public decision making via political contributions and lobbying -- now with two dozen lobbyists for every member of Congress. By influencing elections, they also put in place presidents appointing justices to the Supreme Court who, for example, ruled in the 2010 Citizens United decision (which we'd like to rename "Citizens Defeated") unleashing corporate campaign spending.

So we arrive at the hard spot about which FDR warned us back in the '30s:

"The liberty of a democracy is not safe if the people tolerate the growth of private power to a point where it becomes stronger than their democratic state itself. That, in its essence, is Fascism."

As Naomi Klein recently said, the "sky is the limit" for the OWS movement. So let's get be really clear: Our challenge is to go beyond Occupy Wall Street -- we've got to Occupy Democracy. Taking to heart the words of Civil Rights movement hero Rep. John Lewis (D-GA), "democracy is not a state; it is an act," let's mobilize the biggest 99 percent movement America has ever seen. Let's make sexy and urgent the only viable route to Occupy Democracy: Getting money out of politics so the 99 percent can be heard.

We need to tell every legislator in Washington or wannabe that our support depends on their support for Fair Elections Now legislation -- now pending in both chambers. With 70-plus co-sponsors in the House, the law would allow a viable candidate to run for office with public financing and therefore not bought and paid for by Big Money.

But that's not enough. Americans also need a positive, do-able vision of where such a movement can take us. That's why "Take Back the American Dream" seems to be catching fire.

A term that captures what see emerging, and working, because it aligns with who we humans really are, is Living Democracy -- democracy no longer as something done to us or for us but a culture of mutual responsibility we are together creating. It's beginning to show up all over the world, in spirit and in action and in fast-multiplying OWS protests. The opposite of "privately held government" -- its transparency and ongoing dispersion of power are proven to bring out the best in us.

Anthony Lappé is an author ("Shooting War," Grand Central), TV producer and media consultant. He's written for the "New York Times," "New York" and "Salon," among others. He is founder of Invisible Hand, a progressive video production company.