In Singapore this week, the incredible response to the discussion on the "blockchain" at SIBOS Innotribe is indicative of a massive shift taking place globally in banking. FinTech, or Financial Technology, is taking over the world of banking and financial services as most of what we've thought of as banking is now simply becoming encoded in software. Software and algorithms that many are arguing may be better at doing banking and managing our money than banks themselves.

Banking is predicated on a fairly simple premise that has given bankers and Wall Street operators the feeling of an exclusive, old boys club. Information scarcity and access to proprietary bank networks has made the operation of financial services a mysterious, yet defensible 'black box' capability. Those that have long made money off the street and within the biggest banks of the world have righteously defended the need for regulation, bank charters and rules like anti-money laundering and "know-your-customer" requirements to protect the market. The very fabric of that system is starting to come undone at the seams.

SIBOS is the world's largest financial service conference. It started in 1978 with just 300 participants, but in Singapore this year SIBOS expects more than 7,000 attendees from 140 countries around the world. Walking around the SIBOS conference exhibition floors you see all the world's biggest banks UBS, HSBC, Citibank, ABN Amro, and then we see all the Singapore brands like UOB, OCBC Bank and DBS.

This morning, the first morning of the conference, however, all eyes and ears were on the session entitled New Kids on the Blockchain. An estimate 1,000 people were crammed into an area meant to house approximately 200 people at the opening Innotribe session this morning, as bankers scramble to understand the impact of blockchain's distributed ledger technology that underpins cryptocurrencies like Bitcoin, and Ripple's service. People queued for over an hour for the first session and the Innotribe overflow seating area looked like this... 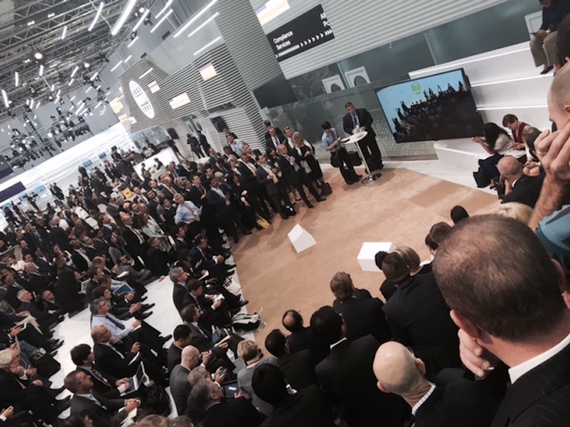 Simon Taylor, one of the instigators behind Barclay Bank's recent adoption of the blockchain and a panelist on the blockchain session, spoke about the reason Barclays is focusing on the technology

"The Blockchain could solve a whole host of issues, not least cost issues, and make life easier for Barclay's clients. It's our duty to aggressively understand the impact of this technology on the way the bank needs to work moving forward. If we don't attack this innovation at the edges of the bank, then we can't shape the control functions within the bank or help SME's leverage off this new technology."

Rumors at Innotribe suggested that Barclays is about to announce some major initiatives in NYC prototyping various blockchain applications.

Neal Cross, from Singapore's DBS Bank Innovation Lab also sat on the morning's blockchain panel and had an even more compelling vision of the technology's impact on banks

"The big thing for DBS is that blockchain technology has the potential to enable businesses to interact without a central authority, and what should attract banks is that it comes pre-tested in respect to scale and security as the underlying infrastructure of bitcoin. The potential to reduce risk, reduce complexity and improve the trade finance value chain is something that DBS is partnering with a number of other banks on. If banks aren't looking at leading technologies like blockchain, then they may not be able to survive the wave of disruption from the thousands of FinTech and technology companies coming their way."

Meanwhile across the floor of the exhibition space where the Innotribe session was being overwhelmed by attendees, Wells Fargo was showing off their latest banking technology 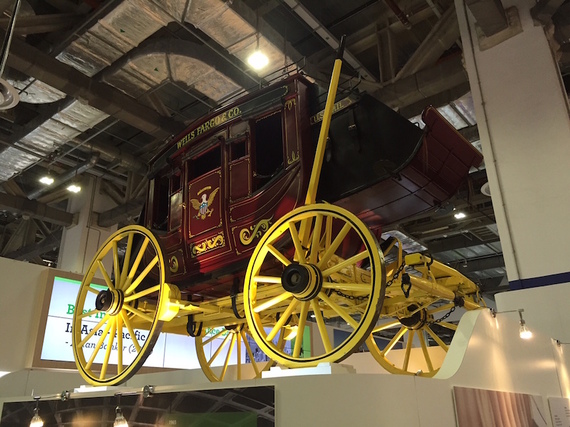 This well illustrates the forces acting on Wall Street and the banking industry globally today. Banking hasn't really changed that much in the last 200 years, but the forces that are impacting banking this decade are better understood by technologists, programmers and user experience designers, than they are by bankers.

If the Innotribe event at SIBOS is any indication the best banks in the world in a decade will likely be technology companies, whether they have a bank charter or Wall Street office is entirely optional.