The U.S. leads the world in prisoners with 2.24 million in jail and more than 4.8 million on parole. That's nearly more than the combination of all those incarcerated in China (1.6 million) and the Russian Federation (681,600).

Minorities have been especially hard hit, forming 39.4 percent of the prison population, with one in every three black men expected to serve time during their lifetimes.

How is it that our land, supposedly the beacon of freedom and democracy for the rest of the world, puts so many of its own people into prison? And why has the number climbed so drastically since 1980? 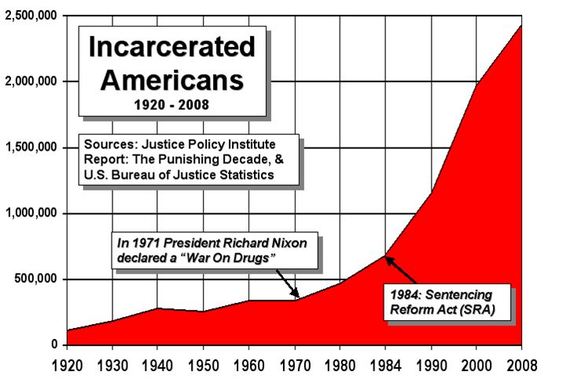 We usually attribute the prisoner increase to a combination of overt racism and Nixon's pathetic "War on Drugs," followed by Rockefeller's "three strikes" legislation in New York, and then the 1984 Sentencing Reform Act with its mandatory sentences. While racism and these laws certainly provide ample opportunity to incarcerate millions for violating senseless prohibition laws, they do not tell the whole story. After all racism was just as virulent, if not more so, long before the dramatic rise in prisoners set in during the 1980s and 1990s. And just because there are draconian laws on the books, it doesn't explain why they are so dutifully enforced. Also, it doesn't explain why so many are willing to risk prison, knowing the increasing odds of getting caught.

If we dig deeper, we'll see that the rise in incarceration corresponds with the rise of financialization and the dramatic increase in Wall Street incomes. Of course, just because trend lines on charts rise and fall together doesn't mean that one causes the other. But this correspondence is much more than coincidence.

In fact, we could show you a dozen other trends lines about financialization, wealth and the rising incomes of America's elites that follow the same patterns over similar years as the incarceration rate. What is the connection? 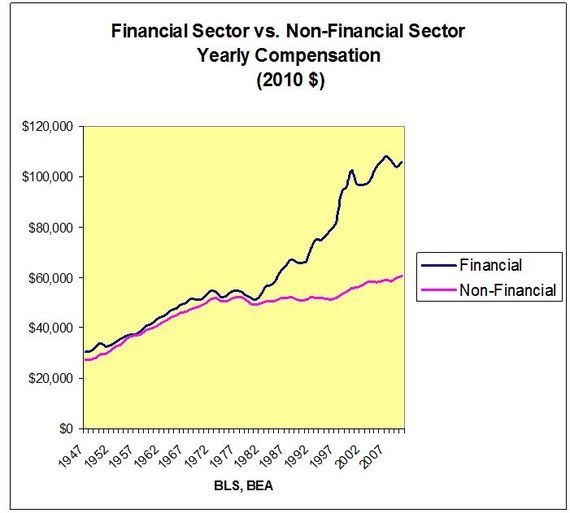 Unleashing Wall Street destroyed manufacturing, older urban areas and Black America's path towards upward mobility
By the end of the 1970s, our policy establishment embarked upon a new experiment to shock the nation out of stagflation (the crushing combination of high unemployment and high inflation). To do so, neo-liberal economists successfully argued that Wall Street should be deregulated and that taxes on the wealthy should be cut in order to spur new entrepreneurial activity that would enrich us all.

Entrepreneurial activity certainly increased, and with a vengeance. Rather than create new jobs and industries that would promote shared prosperity, a new and invigorated Wall Street set about to devastate American manufacturing. It's goal always was, and still is, to make money from money, not to make money by producing tangible goods and services. Wall Street's main product for America is debt. And its profits derive from loading up the country with it, and then collecting compound interest.

Wave after wave of financial corporate raiders (now politely called private equity firms) swooped in to suck the cash flow out of healthy manufacturing facilities. Wall Street, freed from its New Deal shackles, loaded companies up with debt, cut R&D, raided pension funds, slashed wages and benefits, and decimated good paying jobs in the U.S. while shipping many abroad. The released cash flow was used to pay back the financiers, buy up stock to drive up its price, and pay out dividends. Nearly half of the raided companies failed as America's heartland in a few short years turned into the Rust Belt.

But Wall Street's prospered as its profits rose to account for nearly 40 percent of all corporate profits by 2003, up from less than 10 percent in 1982 (It would take more space than we have here to explain why this had little to do with "unfair" foreign competition. We could also show that so called "free" trade agreements were designed by financiers to promote their interests, not ours.) 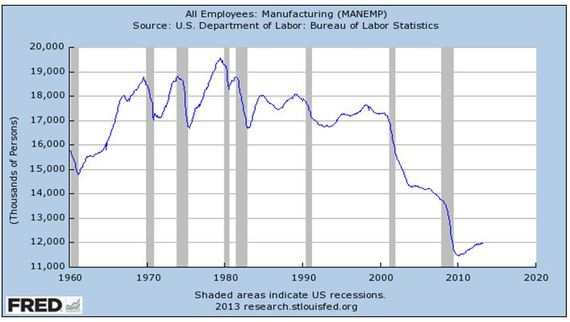 The catastrophic collapse in manufacturing jobs was particularly tragic for black Americans who during the first two decades after WWII had seen their standard of living rise as they entered higher paying industries. As the Wall Street vultures sucked the life out of these industries, black Americans found themselves in dying urban areas where the next best jobs paid less than half what manufacturing once paid. If lucky, young minority men and women could find work in the public sector which still was unionized. More typically, scarce jobs might be found in fast food chains, box stores, warehouses, and in the lower ranks of the health care system. Overall, however, unemployment rates soared, especially for minority youth. Participation in the underground economy often became the only means of survival. 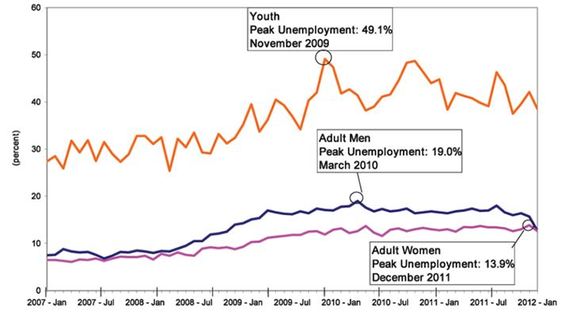 Financialization, gentrification and the removal of low-income residents
Not only does financialization destroy middle-income manufacturing jobs in urban areas, but the process also removes low-income neighborhoods through gentrification. The rise of high-income financiers (and the desire of banks to loan more money to them) creates upward pressure on housing prices in urban areas that cater to elites, like New York, Chicago and San Francisco. As land values rise rapidly, lower-income residents are squeezed out of their neighborhoods, which then are revamped into fashionable townhouses and apartments for the wealthy. (Typically, the children of the well-to-do unconsciously serve as forward troops as they flock into lower-income areas in major cities, seeking to support themselves as artists and young professionals.)

As hundreds of neighborhoods are transformed, higher-income residents require more protection from the alternative low-income economy, called "crime in the streets." As mayors cater to these new elites, police patrols increase and incarceration rises through "stop and frisk" programs which invariably target minorities.

Simply put, for financial interests to transform poorer neighborhoods into desirable real estate for the new elites, it is necessary to get rid of the poor. Jail becomes the new home for many.

The housing bubble and bust further destroyed lower-income neighborhoods and decent paying public sector jobs. Not only did financial interests feast upon productive firms, but also, they thrived on consumer debt (yet another chart that mirrors the incarceration rate). 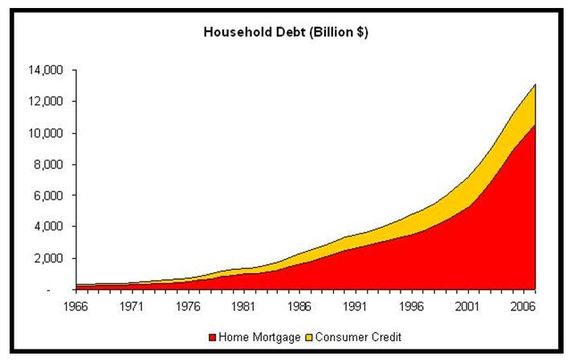 The housing bubble, which was entirely engineered by Wall Street, created enormous demand for junk mortgages to package into securities which then turned toxic. When the bubble burst, the biggest losers where lower-income homeowners who thought they had finally gotten a piece of the American dream. With declining housing prices they found themselves underwater and/or living in neighborhoods with hundreds of abandoned homes. Their debts, remained, while, as we all know, that the richest of the rich were bailed out.

Because of the Wall Street crash, revenue-starved urban areas in the Rust Belt were hit once again. With unemployment higher than anytime since the Great Depression, business and worker tax revenues fell, leading to cuts in public employee jobs and benefits -- the very jobs that middle-income minorities were fortunate to find as manufacturing declined over the previous decades.

Detroit has become the poster child for the ravages brought about by financialization. First corporate raiders and private equity firms squeezed the life out of manufacturing all over Michigan. Then the Wall Street crash destroyed more jobs and undermined the tax base, leading to urban bankruptcy and more job loss in the public sector.

Wall Street's Jobs Program: Incarceration
What will happen to all those unemployed, given the massive shortfall in jobs? What will happen to those trapped in neighborhoods crammed with foreclosed homes? Where is the jobs program for the millions who need it?

High finance has the answer that is now the de facto government policy -- put the dislocated, the unemployed, the "surplus" youth in jail.

That's because financial interests and their crony politicians have no interest at all in traditional jobs programs that could put millions of young people to work. Instead, they are doing all they can to bring austerity policies to America. The less government spends on public services and safety net programs, the more money it has to support Wall Street. As government services are cut, state and local governments must turn even more to Wall Street in order to finance infrastructure projects (where the total cost including interest payments is usually several times the initial costs of construction.) Wall Street's super-profits can only continue if public and consumer funds are transferred to high finance via interest payments on loans. So public jobs programs are out of the question, and both parties have been "convinced" (with campaign contributions) that we can't afford them.

So that leaves us with one and only one jobs program -- incarceration -- which also is a growth opportunity for Wall Street. As public revenues falter, pressure will mount to privatize more and more correctional facilities and law enforcement functions, opening up lucrative opportunities for more privatization and more Wall Street loans to make it happen.

So by all means, let's legalize drugs, let's get rid of mandatory sentencing and lets prohibit "stop and frisk." But until we tackle financialization and its destruction of neighborhoods and jobs, we will channel another generation into the underground economy -- and into jail.

(A version of this article first appeared on Alternet.org on November 25, 2013)

Les Leopold is the director of the Labor Institute in New York. His latest book is How to Make a Million Dollars an Hour: Why Hedge Funds get away with Siphoning off America's Wealth (Wiley 2013)