Third Way is reaching the point of desperation in its quest to cut Social Security and protect its Wall Street, K Street lobbyist, and GOP donors from paying their fair share. As Third Way has become more and more marginalized, its public outpourings have become more and more extreme and, quite frankly, head-scratching.

In a 2011 Politico column, "Progressives: Wise Up," Third Way's president and vice president for policy lectured advocates for Social Security to stop fighting a Grand Bargain that would have cut Social Security's modest benefits - cuts that are opposed by 93.8 percent of Americans.

In 2013, the duo took to the Wall Street Journal where they attacked Senator Elizabeth Warren for proposing to expand Social Security as a solution to the nation's looming retirement income crisis. This time, they lectured not just progressives; they warned the entire Democratic Party not to "follow Sen. Warren...over the populist cliff." Since Senator Warren was standing with the 90 percent of Democrats (and 73 percent of Republicans) who want to increase Social Security benefits, it was no surprise that Third Way admitted that they represented, "no people," beholden only to their wealthy paymasters.

Now, as Senator Bernie Sanders is running strong for the Democratic nomination for president on a platform that includes the incredibly sound and popular idea of expanding Social Security, Third Way is at it again. In a new report, "How the Sanders Social Security Plan is Not Progressive," Third Way is warning the electorate that Sanders is coddling the rich. (In the report's words, the Sanders plan is "substantially tilted toward the wealthy.")

Sanders, who daily attacks the "billionaire class," is proposing to benefit the rich at the expense of the rest of us? Sound preposterous? That is because it is. Let's examine the facts.

In recognition that the nation is facing a looming retirement income crisis, a disappearing middle class, and perilously rising upward redistribution of wealth, a growing number of policymakers are joining the vast majority of the American people in understanding that Social Security is a solution. Social Security is the most efficient, universal, secure and fair retirement income program around. It provides an essential - though too modest - foundation for America's working families. As a byproduct it is the nation's most effective anti-poverty program, keeping over 22 million beneficiaries - including over one million children - out of poverty and lessening the depths of poverty for millions more.

But Social Security's benefits are woefully low by virtually any standard. Given the deterioration of the rest of the retirement system, including disappearing pension programs and risky options from Wall Street that mainly benefit the wealthy, stagnating wages, and lost home equity, the case for expanding Social Security is overwhelming. Congress has not increased Social Security benefits in many decades. Moreover, as the consequence of actions by past Congresses, they will be even lower, as a percentage of final pay, for future beneficiaries.

Understanding these facts, 43 Senators and 116 members of the House of Representatives -- about 70 percent of the Democrats in Congress - are on record in favor of expanding, not cutting, Social Security. Among them is Senator Bernie Sanders. Indeed, he has introduced legislation to do just that.

Here is what Sanders's plan would do. First, it would increase Social Security's benefits across-the-board, but in a progressive manner. Those with the lowest earnings would receive the largest increases as a percentage of those earnings. Second, it would increase Social Security's minimum benefit so that those who work a lifetime at low wages would not retire into poverty, as they do now. Third, it would adopt a more accurate cost of living increase, so that Social Security's modest benefits don't erode in value more and more with each passing year, as they do now. To restore Social Security to long range actuarial balance, including paying for these improvements, Sanders' plan imposes new taxes on those with annual incomes in excess of $250,000.

Sounds both progressive and responsible, doesn't it? So how can Third Way claim not only that the Sanders plan is not progressive, but indeed, that it is "substantially tilted toward the wealthy," as its report does? Only by playing fast and loose, with an apparent desire to obfuscate and confuse, not illuminate and explain.

Conveniently, the Third Way report completely ignores, in its calculations of the plan's impact on those of different incomes, the $11.9 trillion of additional revenue that would be paid by those with annual incomes in excess of $250,000. Those with income below that dollar threshold pay nothing more.

Third Way only mentions the increased Social Security revenue to make the specious point that the new proposed revenue will "crowd out" other social spending. But what Sanders is proposing is simply to require the wealthiest among us to pay the same rate on their incomes into Social Security as less well-off Americans. Right now, someone with an annual salary of around $1 million pays one-tenth the rate on those earnings paid by a minimum-wage worker on his or her earnings.

Senator Sanders' expansion bill simply asks millionaires and billionaires to pay the same rate on their income as other less well-off Americans do. It is sound policy and fair, supported by the vast majority of Americans, Democrats, Independents and Republicans.

Third Way's argument that requiring the wealthiest to fairly pay into Social Security will exhaust their ability to pay increased taxes seems absurd coming from an outfit that has proposed cutting the Social Security benefits of those with total annual incomes of $12,000 or less. It is reminiscent of the line in a 2013 Washington Post editorial attacking then-Senator Tom Harkin and Representative Linda Sanchez for introducing legislation to expand Social Security. Though the Post editorial board never mentions the impact of the Social Security cuts it supports on those of modest means, it apparently felt the need to remind us that "the rich have finite resources."

Given the upward redistribution of wealth, where the top one percent has seen enormous income growth while the bottom 90 percent has seen its income decline, it is not unreasonable to require the wealthiest among us to contribute the same rate into Social Security AND to pay more in federal taxes to rebuild our crumbling infrastructure, better educate our workforce by making college debt-free, and support other goods and services that benefit us all. And, despite Third Way's effort to turn the generations against each other, the fact is that countries that spend more on seniors also tend to spend more on children; those that spend less on one, spend less on the other.

When it was Senator Elizabeth Warren who was being attacked by the Third Way in the exact same manner for proposing to expand Social Security, she responded,

And to the ludicrous charge that her plan to expand Social Security benefited the wealthy, she forcefully responded,

Oh please. I'm out there working for Jamie Dimon [CEO of Wall Street firm JPMorgan Chase] the same way Dick Cheney is out there trying to save the environment.

An interesting note on this exchange is that while it is clear that neither Senator Warren nor Senator Sanders are getting paid by JPMorgan Chase, the Third Way's Board has had a number of members who have received their paychecks directly from that Wall Street bank.

In addition to ignoring the revenue in its analysis, except to argue that this will tax the wealthy beyond their ability to pay a penny more, how else does the Third Way's analysis seek to argue with a straight face that the Sanders proposal is "substantially tilted toward the wealthy?"

The only way to even plausibly make the case that the Sanders proposal disproportionately favors the rich is to obscure the facts. The overwhelming majority of Social Security's 60 million beneficiaries have extremely modest incomes. As the following chart shows, almost three out of four seniors - 72.5 percent - have incomes under $50,000. Over nine out of ten have incomes under $100,000 dollars. Fewer than two out of a hundred have incomes over $200,000. And many of them are still working and not yet receiving their earned Social Security benefits. 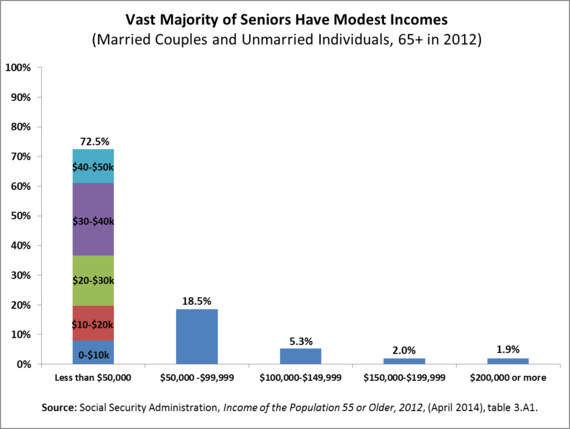 Instead of using dollar figures to analyze to whom the new benefits go, the report refers to "quintiles." The top quintile consists of people with earnings over $63,000 -- hardly "wealthy" -- and many of them are still working and not yet receiving Social Security. To reinforce its claim that the Sanders proposal lacks progressiveness, Third Way obscures the facts further by comparing a couple with combined income of $220,000, carefully picked to make the most dramatic case, to single individuals with incomes of $25,000 and $60,000. Presumably by design, the example obscures Social Security's ingenious structure, which is highly progressive.

Social Security is designed to provide a floor of protection, allowing working families to retain their standards of living in the event that wages are lost as the result of disability, old age, or death. Higher earners receive larger benefits in absolute dollars, as they should. At the same time, those with lower earnings receive larger benefits as percentages of their earnings, in recognition that they have less discretionary income and therefore need a greater percentage of their benefits replaced. The following chart shows the ingenious structure. 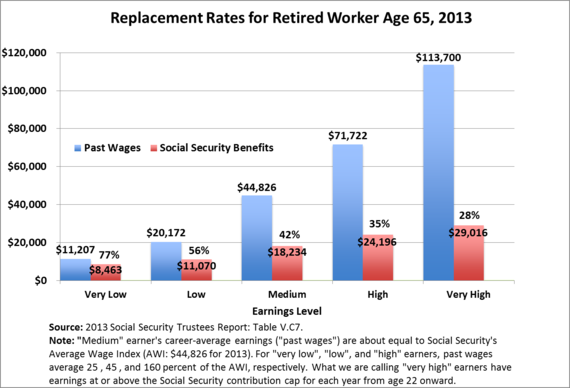 The Third Way's analysis is even more misleading than that, though. The report includes as a benefit increase, in its calculation of who gets what benefits from the Sanders plan, the more accurate cost of living adjustment. But preventing benefits from eroding is not a benefit increase. It does not put a single dollar of purchasing power in any beneficiary's pocket, rich or poor. Indeed, the Sanders proposal will likely continue to under-measure the inflation experienced by seniors and people with disabilities, but it is the most accurate measure that the Bureau of Labor Statistics now produces. Though not a benefit increase, preventing the erosion of purchasing power of existing benefits is most important for the most vulnerable beneficiaries, who have little or no other income to offset the loss.

Third Way and its Wall Street donors want to cut Social Security, presumably to escape their obligation to pay their fair share and to force more Americans to seek to replace the lost benefits with retirement savings, invested in the stock market and subject to high Wall Street fees. But that is not what the overwhelming majority of Americans want - and for good reason. Expanding, not cutting, Social Security's modest benefits, and requiring the wealthiest among us to pay their fair share, is responsible and wise policy. The nation is facing a looming retirement income crisis. The 401(k) experiment is a clear failure. Social Security works. It is a solution.

The American people want to see Social Security expanded, not cut, and want the wealthiest among us, those who have benefited so much from the commonwealth (i.e., common wealth) pay their fair share. And that is the right policy, as well.