The scientific community is all abuzz about the discovery of a gigantic bee in Indonesia.

Known as Wallace’s giant bee, it has a wingspan of 2.5 inches. Researchers last saw the bee in 1981 and feared it was extinct.

That fear changed to elation last month after entomologist Eli Wyman and wildlife photographer Clay Bolt traveled to Indonesia in hopes of seeing if the giant bee was still around.

Members of Wyman and Bolt’s crew conducted most of their search in the country’s forests, as the giant bee had been known to nest in active, tree-dwelling termite mounds, according to a post Bolt wrote for Global Wildlife Conservation.

Bolt, Wyman and their crew spent days searching for the bee and considered giving up after one person on the team came down with a heat-induced illness.

But their luck changed when Iswan, an Indonesian guide and conservationist who was part of the team, spotted something. As Bolt described it:

That day we walked down an old orchard road flanked on both sides by mixed lowland forest and fruit trees. Iswan, ever the eagle eye, spotted a low termite mound, around eight feet from the ground.

He later recounted that he almost didn’t mention it to us because, like the rest of the team, he was feeling tired and hungry. However, I’ll forever be grateful that he did because as we scampered up an embankment to the nest, we immediately noticed that it had a hole in it, like many other nests we’d seen, but this one was a little more perfect. It was very round, and just the size that a giant bee might use.

Bracing the rotting tree, I asked Iswan if he would mind climbing up to take a look inside. As he peered inside the nest he exclaimed, ‘I saw something move!’

Jumping down, for fear that the creature was a snake—his worst fear—after catching his breath, he said that it looked wet and sticky inside. Eli and I looked at each other with reserved excitement. Eli climbed up and immediately felt for certain that it was a bee nest. The structure was just too perfect and similar to what we expected to find. I climbed up next and my headlamp glinted on the most remarkable thing I’d ever laid my eyes on. I simply couldn’t believe it: We had rediscovered Wallace’s Giant Bee.”

Bolt said he first did a “happy dance” before photographing the bee in its natural habit.

Here’s how the bee compares in size to a typical honeybee:

The bee may have been rediscovered, but Bolt told Gizmodo that no one knows how many of the bees are still around or what their preferred habitats are.

He hopes to work with researchers and conservation groups in Indonesia to set up protection for the bee, possibly by elevating it as an avatar of local biodiversity.

Still, Bolt said the rediscovery is good news at an otherwise dark time for Earth’s biodiversity.

“This really offered me hope. There’s so much bad news that’s coming out, with all these species being lost, and I think sometimes it’s easy to just give up and say ‘there’s no hope for anything,’” Bolt told Gizmodo. 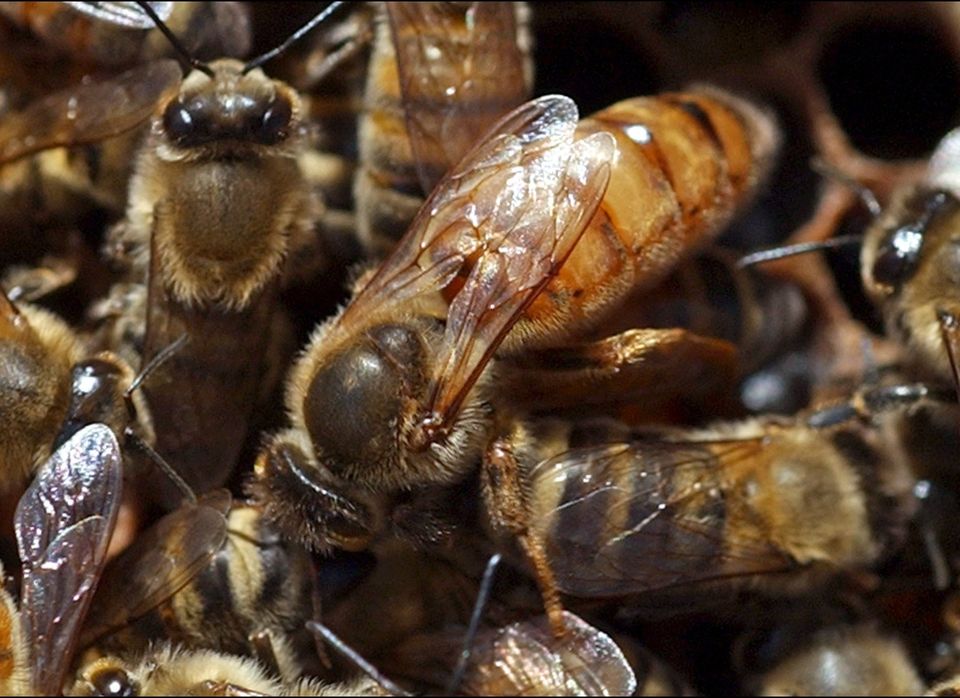 1 / 8
They Haven’t Heard Of Feminism
We’ve long since recognized that women have more value than just having babies. But tell that to bees. The queen bee’s only job is to lay eggs, without which the hive will die. The queen doesn’t get to leave the house either, <a href="http://www.nytimes.com/info/bees/" target="_hplink">except for once</a> to mate with several drones. From these encounters she will store the sperm to last her entire lifetime. A hive only has one queen bee at a time. But any young female bee, less than 48 hours old, can become a queen bee once fed a <a href="http://animals.nationalgeographic.com/animals/bugs/honeybee.html " target="_hplink">special food</a> called “royal jelly” by the workers. That's a queen bee is pictured in the center.
AP