Wallpaper is fresh and fabulous, but it can be intimidating. If you’ve got questions, we’ve got straightforward, time-saving, cost-cutting answers.

What's the one thing I should know about wallpaper these days?
"Metallics!" says Janet Lee, author of Living in a Nutshell: Posh and Portable Decorating Ideas for Small Spaces. "But not the loud, retro, shiny papers that used to adorn 1970s suburban powder rooms." Now gold and silver wallpapers add a subtle sheen to patterns and create extra light in small spaces. Her second choice? Black-and-white prints that keep rooms looking clean and uncluttered, while adding drama. "I love over-scaled black-and-white flowers, especially when paired with a Tiffany blue chair or end table."

How can I paper a small room?
The worst wallpaper in this situation would be a dark-colored paper with a small print, says New York designer Fawn Galli. "It makes the room gloomy, even smaller and -- in the most dramatic cases -- claustrophobic." Instead, go with a large, fantastical print, such as one of botanicals or birds. The oversized design creates the optical illusion that the walls are bigger.

Where should I try small prints?
These patterns work in rooms where you want a sense of calm, says Holly Becker, a stylist at Decor8Blog.com. Her favorites places include bedrooms and spacious master baths. One caveat: no great rooms or living rooms. There, small prints often fade out and get lost in the largeness of the space, a problem that’s identifiable only after the paper is up.

How do I keep it from getting too expensive?
Do one wall in a dramatic pattern and add a mirror on the wall opposite, says Lee, which creates an echo of the print but doesn’t require the expense of papering both. If designer papers are out of reach for even one wall, consider creative options, like gift wrap and papering smaller areas. "I adore the trompe l'oeil series featuring vintage Penguin Book spines. Use it to line the backs of bookcases with double-sided tape." (Other options for bookshelves are a punchy color or small print, suggests Galli, so the shelves don't look cluttered once the books are placed.)

What do I do in rooms with low ceilings?
"Check out some of the dip-dyed wallpapers that are now available," says Ashlyn Gibson, owner of the design and clothing store Olive Loves Alfie. They have intense color at the bottom, then fade out to white or neutrals at the top, giving the magical illusion of taller walls." Vertical patterns like stripes create a similar effect, says Becker. "Consider painting the ceilings white or another light color, such as pale yellow or blue, to add extra height."

How do I paper my bedroom?
Covering just one wall in an over-scaled, dramatic print makes a strong visual statement, says Lee, but it can ruin the peaceful, serene feeling that most of us want in that room. Her solution? Paper the wall that’s behind your headboard. Then, she says, "paint the walls that you face while in bed in soothing colors."

Is there some place to put wallpaper that most of us overlook?
Wallpaper tends to end up in bedrooms and living rooms, says Galli. We forget the hallways. "A corridor can become dead and dark," she says. "Placing a wallpaper on the wall brings it alive." You have tons of liberty in your choices, because you don't need to match a whole room full of upholstery.

What about wallpapering inside closets?
"This is very in right now," says Galli. "I love to use a paper with a bit of foil to give extra reflection and light in those dark corners." Both she and Lee advocate bold patterns. "They give a luxurious feel in what’s usually a small, forgotten space," says Lee. To save on costs, try shopping the remnant bin at a local distributor, because you don’t need that much to cover the area.

What’s the one mistake that most people make?
"Double and triple check that your pattern is running in the right direction," says Becker. "So many people install wallpaper and realize afterwards that the pattern is upside down." And, of course, make sure the patterns line up so it’s not obvious where one roll ends and another begins.

Coolest, weirdest, most successful wallpaper ever?
"On the stucco ceiling beams in my friend's loft bedroom space," says Lee. "I papered the wall behind her bed and carried the pattern up and over the one stucco beam that hangs over the head of the bed." All of which created a canopy effect that heightened the look of the small space. Becker’s triumph took place in a kitchen. "I used liquid starch and 'wallpapered' ugly, generic cabinets with vintage-inspired fabric. Years later, the cabinets still look great. The fabric easily comes off without damaging the surface of the cabinets. Score!"

Wallpaper Ideas: 11 Things You Need To Know Before Decorating Your Walls
10 Stylists' Secrets To Make Your Home Look Great 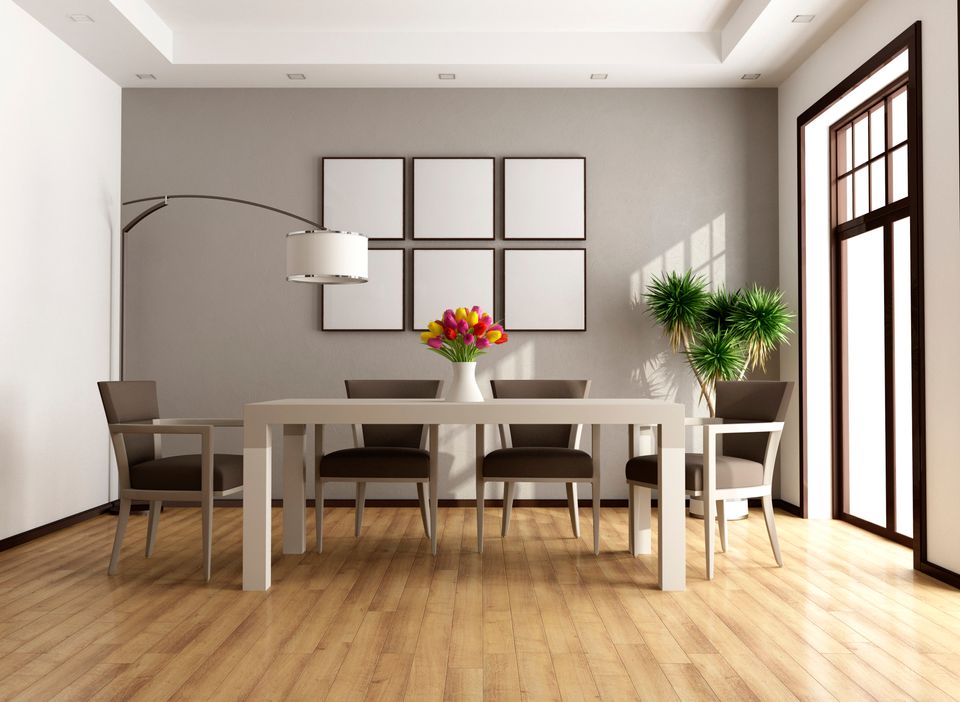 1 / 10
Just Add Water (Sort Of)
The difference between the home you've spent so much effort redoing and those you've torn from magazines (beyond a seemingly limitless budget) might be a well-placed little bouquet. We didn't believe it either, until we were told to place a finger over the vases of flowers in photos. Poof! The room suddenly feels less pulled-together. Emily Henderson, star of HGTV's "Secrets of a Stylist," has a foolproof arrangement that works anywhere: several flowers in a single style -- like peonies or grocery-store white roses -- arranged loosely in a cylindrical vase. "It's more natural if you use a mix of open and closed buds," she says.
Thinkstock