"As an artist working in community, my art lives in the intersection of art and war." -- Claudia Bernardi. 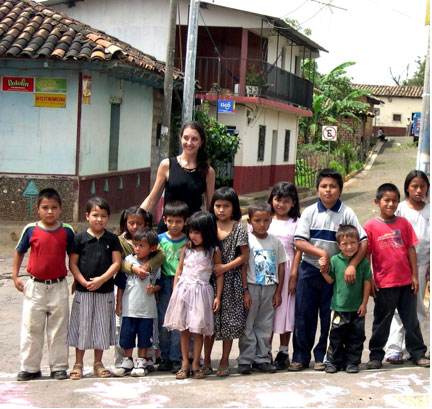 Claudia Bernardi's work as an artist has been celebrated as the subject of two documentary films and over 40 solo exhibitions. Recently, her work as a human-rights activist was honored as well when she received the International Beliefs and Values Institute's "Sustainable Visions and Values" Award.

The International Beliefs and Values Institute (IBAVI) is a nonprofit, nonpartisan organization hosted by Virginia's Mary Baldwin College. Their mission is to understand the links between "religious and cultural understanding" and the subsequent impact upon international actions, policies, and practices. Each year, IBAVI recognizes a distinguished individual who embodies "Sustainable Visions and Values." Recipients of the award exemplify the transformative aspirations that are at the heart of IBAVI's mission - conflict resolution, human and minority rights, sustainability, equal treatment and access, global education, and religious and cultural understanding. 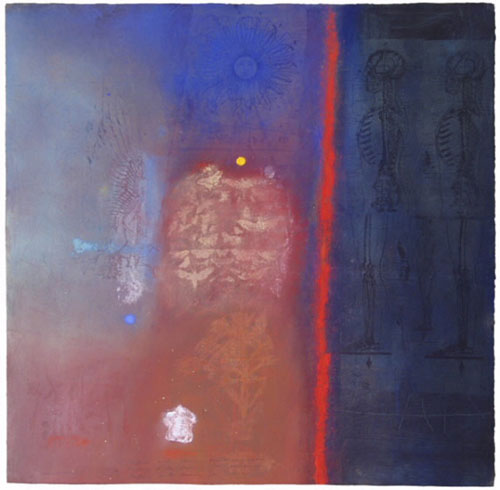 To see Bernardi's gorgeous images is to be seduced by their jeweled colors of raw pigment and lured by their lyrical titles. But a closer look reveals skeletal remains, fragments of the silenced, drawn with indelible tenderness. Her work weaves visual poetry with a brutal frankness informed by her time spent in mass graves exhuming innocent victims of political conflicts. As a member of the Argentine Forensic Anthropology Team (AFAT), a scientific organization founded to investigate human-rights abuses against civilian populations, Bernardi has worked at sites throughout the world.

It was in 1992 that her work for AFAT first took Bernardi to El Salvador. The team was to investigate rumors of a massacre eleven years previous in the hamlet of El Mozote. Their focus was initially limited to a small building known as "The Convent," where they would subsequently unearth the remains of 143 people, 136 of whom were under the age of ten. AFAT would return to El Salvador several more times, completing their investigation of El Mozote in 2004.

She visited the village of Perquin in 2001, four kilometers north of what was now the ghost of El Mozote. There, Bernardi began working with the community and together they would eventually create a mural dedicated to the victims of the massacre. Inspired by the villagers' ability to use art to overcome their longstanding differences and personal traumas, Bernardi would found The School of Art and Open Studio of Perquin in 2005. 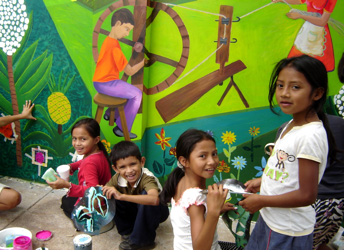 The School of Art and Open Studio of Perquin.

Today, the school continues to use art as a tool for education, community development, and a voice for victims of human-rights violations. The school is free and open to all. Students, from children to the elderly, sometimes walk miles to learn to draw, paint, make textiles and wood sculpture. It is run by four local artists who, just five years ago, had never even made a work of art.

Word of the school's success spread and Bernardi has taken the "Perquin Model" to victims living in Guatemala, Canada, Colombia, and other areas of El Salvador. There, she leads workshops for the creation of community murals. "Murals," Bernardi notes, "are books with no words."

These "Walls of Hope" define Bernardi's mission to use art to engage and build community with those who were victims of torture, political, and sexual violence during times of armed conflict. Participants work collaboratively to create the theme and images. "What is this mural about?" Bernardi asks them. "What would you want to leave as a message?" Pictures spill from their hands as memories and self-respect are recovered upon the walls. Some weep as they draw.

At a workshop in Colombia for survivors of sexual violence during that country's long, brutal conflict, one woman painted half of a self-portrait explaining, "The war robbed me of half of myself." Her half-image reaches a hand to a Virgin Mary. They have both lost theirs sons to violence. But the Virgin's hand is missing, the result of an anti-personnel land mine.

These conflicts have left in their wake injuries both seen and invisible. Entire families killed, women and girls savagely raped, lives destroyed, animals slaughtered and crops poisoned. Bernardi recalls a workshop in Colombia, "Don Fabio told me that he was surprised about how the violent forces wanted to even kill the earth. As campesinos they had learned how the earth talks, and how 'she,' la Tierra, can sing and produce for everyone to be fed. Why would anyone want to kill the land, he asked?"

Bernardi recently returned to Guatemala for the creation of a community mural in Panzos, Alta Verapaz. There she worked with survivors of the Panzos massacre of 1978 and relatives of its victims. At the conclusion of the project, a visually-impaired elderly man spent three hours with his face inches from the mural, taking in the image. "What we painted," he told Bernardi when he had finished, "is the Truth." 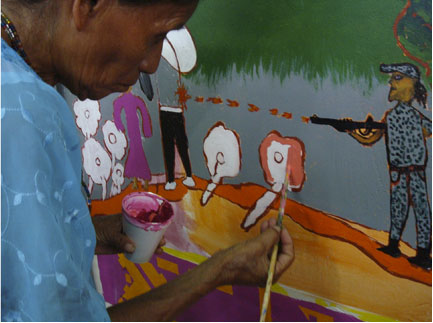 A participant paints her memories of terror. Walls of Hope.

"I am hugely privileged to be a part of these projects," Bernardi says. "It is truly a collaboration between the participants and the community organisers." Victims come together, sometimes even joined by the perpetrators, and collectively they learn to trust one another and to work in unity in order for the success of the projects. The fact that the participants have no background in art, no previous vocabulary to build upon, makes the work that Bernardi and The Walls of Hope is doing all the more remarkable.

In giving IBAVI's "Sustainable Visions and Values" Award to Bernardi, Shealy says, "Claudia really is offering an opportunity for recovery from perhaps the most horrendous sort of pain and tragedy that human beings can experience. She does so with great humanity and wisdom, not to mention effectiveness and skill. Without her efforts, it is questionable whether and how any of these women, families, and communities would ever have a voice, much less have the opportunity for healing." 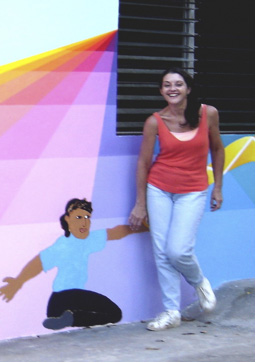 To learn more about the school and Claudia Bernardi's work, or to make a donation, visit wallsofhope.org.