CHICAGO, Nov 23 (Reuters) - Nine people were arrested near a Walmart store in California on Friday as part of national protests for the rights of hourly workers, even as the world's largest retailer enjoyed what it said was its best ever start to the holiday shopping rush.

Hundreds of protesters, including some Walmart workers who skipped their shifts on the retail industry's busiest day, spoke, chanted and sang outside of Walmart stores around the United States, making pleas for higher wages and better healthcare for Walmart hourly workers.

OUR Walmart, an organization backed by the United Food & Commercial Workers (UFCW) union, said it counted 1,000 protests in 46 U.S. states, including strikes in 100 cities - figures that Walmart said were "grossly exaggerated."

There was no evidence that such activity disrupted what appeared to be a strong start for Wal-Mart Stores Inc to the crucial holiday shopping season.

The arrest of nine people in Paramount, California, who told law enforcement they intended to be arrested, occurred at around 12 p.m. local time (3 p.m. ET), well after the rush of specials that kicked off at 8 p.m. the night before and culminated with a 5 a.m. round of deals on "Black Friday," the unofficial start of the holiday shopping season.

Nine people, who refused to leave the street, were peacefully arrested for refusal to disperse, said Captain Mike Parker of the Los Angeles County Sheriff's Department. Three of those arrested were striking Walmart workers, OUR Walmart said.

Other demonstrations were smaller and less disruptive. At a Walmart on Chicago's South side, just one employee from the store's nearly 500 staff took part in the demonstration, according to Walmart. There, four busloads of protesters marched outside and were not stopped by police or security guards.

Many of the demonstrators were not Walmart workers, but were supporters such as Candice Justice, a retired teacher who stood with dozens of others in Chicago on Friday morning.

Walmart said it was aware of a few dozen protests on Friday, and said the number of workers that missed scheduled shifts was "more than 60 percent less than Black Friday last year."

The team organizing the protests disagreed.

"Right now there are hundreds and hundreds currently on strike," Dan Schlademan, director of Making Change at Walmart, a campaign anchored by the UFCW, said on Friday afternoon. He said he could not provide a specific number of striking workers.

'SAM WALTON WAS A GOOD MAN'

Walmart said five workers of the 250 scheduled to work at the Paramount, California store skipped shifts on Friday, while OUR Walmart said 18 did so.

One shopper leaving the store with his girlfriend said that the protest might deter him from shopping at Walmart again.

"We need to put ourselves in their shoes. I probably won't shop here; I don't think they should take advantage of workers," said Joe Tegue, a 30-year-old contractor.

For its part, Walmart said it recorded its best Black Friday events ever, with more shoppers than last year and nearly 10 million register transactions between 8 p.m. Thursday and 12 a.m. Friday. It said it sold more than 1.8 million towels, 1.3 million TVs and some 250,000 bicycles.

Shares of Bentonville, Arkansas-based Wal-Mart rose 1.9 percent to $70.20 on Friday, outpacing the gains in the broader stock market during a shortened trading session.

Rosetta Brown, who has been with the company for 15 years and works at the Sam's Club in Cicero, Illinois, joined the protest and lamented how employees are treated now compared with the era of company founder Sam Walton.

The Chicago worker who protested, Tyrone Robinson, said he earns $8.95 an hour working in the produce department, and that his shifts have been cut back to less than 40 hours per week.

Wal-Mart filed an unfair labor practice charge against the UFCW with the National Labor Relations Board last week in a bid to thwart the protests. Days later, OUR Walmart filed its own charge with the NLRB, saying the retailer was illegally attempting to deter workers from participating in strikes.

More allegations of violations are expected to be filed with the NLRB in the coming days, Schlademan said.

"We don't expect to have any announcements or decision today or during the weekend," she said. 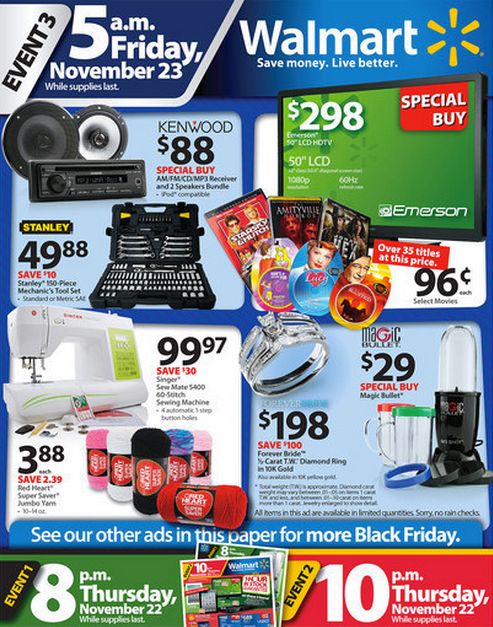