Walmart workers are apparently not too happy about having Walmart tell them how to dress, and now labor activists are getting involved.

Richard Reynoso, a Walmart employee working in a southern California store, sent a letter to Walmart’s corporate headquarters on Monday, claiming that he couldn’t afford to comply with a new company dress code that takes effect on September 29. It was written on letterhead with the logo of OUR Walmart, a union-backed organization advocating for Walmart workers.

Under the new code, workers will have to a wear a collared blue or white shirt and black or khaki pants, along with a Walmart vest the company will provide. Employees can use clothes they already own or buy new clothes anywhere they want, but they have to pay for the shirts and pants out of their own pockets.

Reynoso wrote that he makes between $800 and $900 a month and asked the company to cover the cost of buying the new clothes he needs.

“The sad truth is that I do not have $50 laying around the house to spend on new uniform clothes just because Walmart suddenly decided to change its policy,” he wrote. “If I have to go out of pocket for these new clothes, I’m going to have to choose which bill to skip.”

Walmart spokesman Kory Lundberg cautioned against giving too much weight to Reynoso's letter. He said the company decided to roll out the dress code in advance of the busy holiday season. Workers and customers had told the company that shoppers couldn’t distinguish between store employees and customers wearing blue T-shirts and khakis. Walmart had gotten "a lot of feedback" from workers, Lundberg said, but that most of it has been positive.

“We always want to hear from our associates, it makes us a better company," Lundberg wrote in an email to HuffPost. "I find it odd that this letter came from the Washington DC office of the UFCW and not from California, where the associate who signed it is from. I think that context helps most reasonable people better understand the letter.”

Reynoso's complaints echo those of Walmart workers in an internal forum, Gawker reported .

"With all due respect to the company, this is more of a financial burden to our family since this is our only source of income with my wife and two kids. We can hardly afford to live on my income now with us having to pay for a new uniform (aside from the vest). It's silly. The uniform we have now works. Why change it?" one worker wrote in the forum, according to Gawker.

Several employees also vented their frustration to Business Insider, including one who complained: "In the time I have been at Wal-Mart I have gone through four to five dress code changes. This one is by far the weakest and most pathetic attempt to gain customers back."

On Reddit, reactions to the dress code changes were mixed, with some commenters saying they looked forward to having more clothing options and others writing that it "sucks."

Workers can buy the new clothes they need at Walmart using their employee discount, the company noted in an internal announcement about the dress code leaked to Gawker by a Walmart employee. 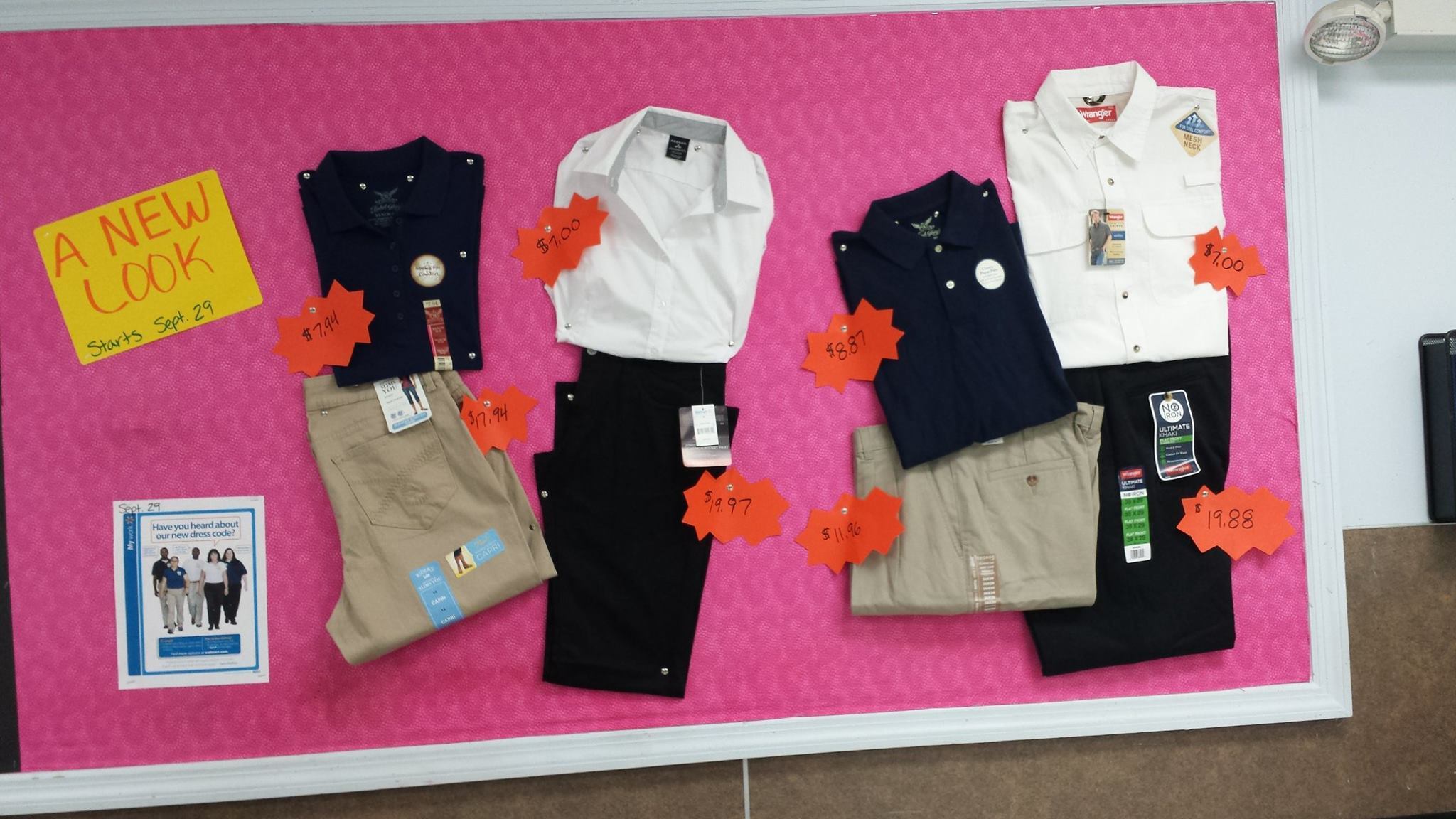 A photo of the new uniforms and their prices at Walmart from a break room in an Alabama store.

“Walmart was very smart” in picking a new dress code for which it’s not legally required to foot the bill, according to Judy Conti of the National Employment Law Project, a think tank focused on labor issues. Companies can force workers to shell out for clothes required for their jobs, as long as that clothing can be worn elsewhere, Conti said. Businesses are only legally required to pay for branded shirts and pants or clothes that are so outrageous they would be difficult to wear outside of work -- like a bright-orange shirt for example.

“There is nothing illegal here, it is not unprecedented, but is it really necessary?" Conti said. "It’s one more cost they’re asking the country’s lowest-wage workforce to absorb.”

She added that the company could go a long way in quelling the outrage by providing the clothes to workers free of charge. Walmart made $4.09 billion in profits last quarter.

Labor activists and workers have targeted Walmart in recent years for paying low wages and subjecting workers to erratic schedules with unreliable hours. Full-time Walmart workers make $12.92, on average, or nearly $27,000 a year, according to the company’s website. Advocates argue that most Walmart workers are making even less, given that the Walmart figure doesn’t include part-time workers.

A 2013 analysis from House Democrats found that one Walmart in Wisconsin costs taxpayers $900,000 a year because workers’ wages are so low that they have to rely on various public assistance programs.

Walmart has also been suffering from issues other than bad PR. The slow economic recovery, combined with cuts to government benefit programs, means that low-income Americans -- Walmart’s core customers -- have less money to spend. The retail giant is also facing competition online and from dollar stores and drug stores. The company’s U.S. sales have fallen in 12 of the past 20 quarters at stores open more than a year, according to Ken Perkins, the head of Retail Metrics, a retail data firm.

The 10 Jobs With The Worst Co-Workers