One Ohio Walmart is asking employees to donate food for other workers who are struggling so much they can't afford to buy a Thanksgiving meal for their families.

The Canton, Ohio, store is holding a food drive for employees, according to a pair of photos circulated by OUR Walmart, an advocacy organization with ties to the United Food and Commercial Workers Union. Signs attached to bins located in employee backrooms ask workers to “donate food items here so associates in need can enjoy Thanksgiving dinner.” 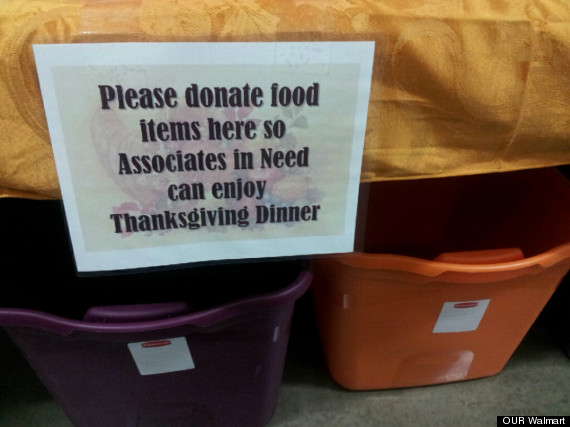 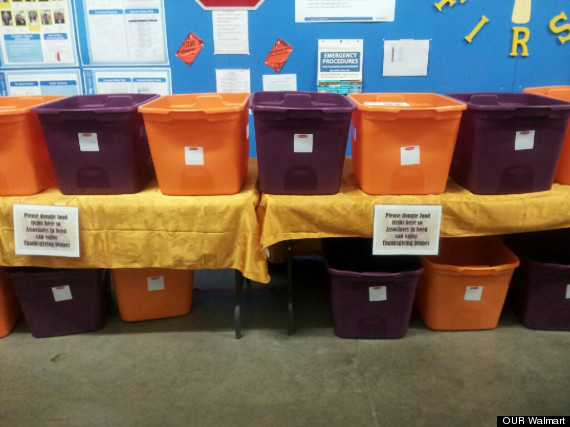 The food drive underscores the struggles that advocates for low-wage workers say Walmart employees face on a regular basis. Most Walmart store employees make less than $25,000 per year, according to a calculation by The Huffington Post’s Dave Jamieson earlier this year. That relatively low wage can mean that Walmart workers end up relying on means other than pay -- like the food drive -- to get by.

One Walmart’s low wages could cost taxpayers $900,000 per year because workers use social safety net programs like food stamps and government-subsidized health care to make ends meet, according to a May study from congressional Democrats.

A Walmart representative told the Cleveland Plain Dealer, which first reported the Canton food drive, that the donations are indicative of a supportive employee culture -- not proof of low wages. The event is specific to the Canton store, but Walmart workers elsewhere can donate money to their colleagues in need through a payroll deduction, according to the Cleveland Plain Dealer. Workers can get up to $1,500 from co-worker donations to address emergencies like homelessness, serious medical problems and major car repairs.

"It is for associates who have had some hardships come up," Kory Lundberg, a Walmart spokesman, told the Plain Dealer of the food drive. "Maybe their spouse lost a job. This is part of the company's culture to rally around associates and take care of them when they face extreme hardships."

When reached for comment, Walmart representatives referred The Huffington Post to information in the Plain Dealer story.

The report comes as Walmart faces increased scrutiny in the lead-up to the holiday shopping season over the way it treats its workers. Workers organized by OUR Walmart have gone on strike in various cities across the country, demanding higher pay and better working conditions. In Los Angeles, those protests lead to more than 50 arrests earlier this month.

Last year, Walmart workers protested at stores in 46 states during Thanksgiving and Black Friday. Similar actions are expected this year as Walmart and others push their Black Friday sales to start earlier on Thanksgiving Day.