After a series of public hearings with the Burbank City Council, opponents of the proposed Burbank Walmart have turned to their last resort. Three Burbank residents are suing the city for allegedly illegally issuing permits to Walmart.

"My clients are very concerned about whether Walmart is good for Burbank," Gideon Kracov, who is representing the residents, told The Huffington Post. "They believe that Walmart must follow the same rules as everyone else. The lawsuit alleges that Walmart got special treatment from the city concerning traffic and parking in this very congested part of Burbank."

Kracov explained that, "The lawsuit alleges that the city cannot rely on the old environmental review because the city failed to implement the traffic mitigations that were required under that review." He added, "The lawsuit also alleges that the ten-year-old environmental review is stale and never considered the impacts of a Walmart with grocery." The more than 30,000 square-foot grocery area that is a part of the proposed Walmart would increase traffic and threaten surrounding grocers, according to the lawsuit.

However, Burbank City Attorney Amy Albano responded to HuffPost, "Stores go out of business, and new stores move in. It doesn’t mean you start the process all over again." Regarding parking, Albano said that the Empire Center, which the building is a part of, has adequate parking to accommodate Walmart.

The plaintiffs are asking a judge to qualify Walmart as needing "discretionary" permits, which would require an environmental impact report and solutions to unmet traffic and parking requirements. It would also allow opponents to appeal the matter to the City Council.

When the environmental impact report was done for the space in 2000, Albano said, it was developed to allow for a big box store and economic effects on the community were assessed at that time. In response to the fact that the report was done over ten years ago, she said that re-evaluations are not necessary or procedural. Still, the lawsuit contends parking, traffic and other requirements put in place in 2000 have not been met.

The lawsuit requests that a judge issue an injunction so that Walmart cannot move in until this suit is addressed. Kracov said he expects an answer regarding the injunction request in the next two or three months.

Walmart did not immediately respond to a request for comment.

This lawsuit is another attempt by a small number of individuals associated with special interest groups that want to stall access to affordable prices and economic opportunities including new jobs and additional tax revenue. We know the community of Burbank wants and needs this project, as demonstrated by the hundreds of residents who turned out for the open house last fall, the countless number of supportive letters to the editor, and ongoing dialogue with residents excited about the new job opportunities. We will continue to work with the community and look forward to serving customers soon. 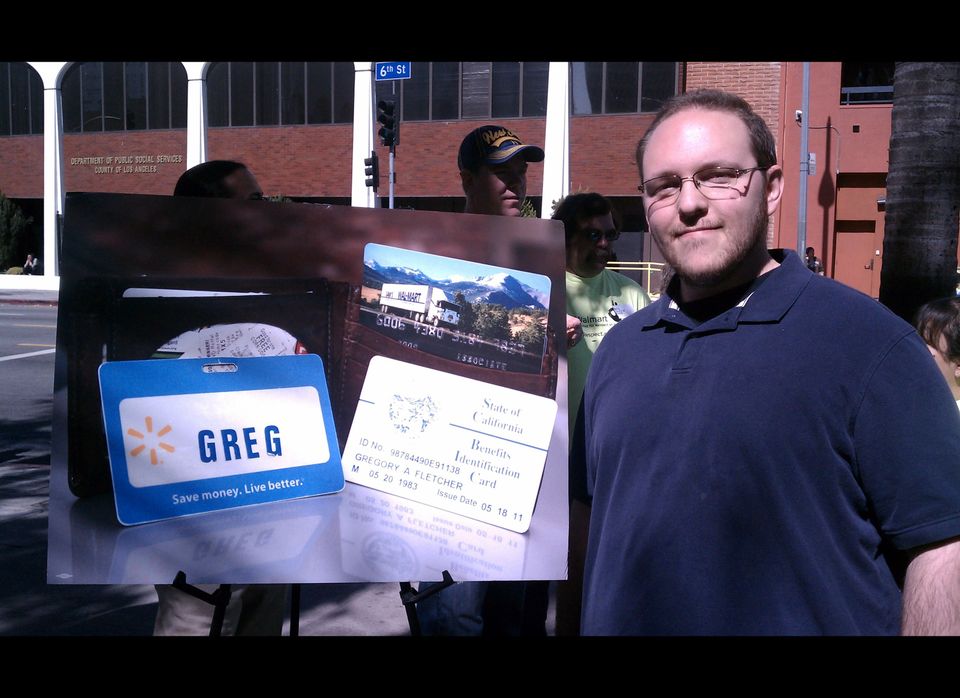 1 / 17
Greg Fletcher, Duarte Walmart Employee
"Both my wife and I work for the Duarte Walmart store. Both of us are on Medi-Cal and are saddled with credit card debt, barely making our rent in a one-bedroom apartment. I have a picture here of three cards I carry. My discount card. Walmart gives us that benefit of discount cards, and yet we cannot use that towards produce and healthy eating. We can only use them towards things like electronics, toys and candy bars. Walmart, don't give us discounts for things we can't afford like televisions. Next, this is my Medi-Cal card. I would like to thank my fellow citizens of California for providing benefits that my employer won't. What does it take to be full time? I want to be full time. I already work full-time hours as a part-time associate, yet I get none of the benefits. When I ask how can I be full time, they say I could become an overnight janitor. That would mean a wage cut of $1.50." (Photo Credit: Kathleen Miles)