Walmart recently announced that it would spend more than $1 billion this year to raise workers' pay, improve the way their hours are scheduled and provide better training.

The company framed this as something it was doing for its employees and in response to the improving job market.

But there’s another, urgent reason that Walmart needs to spend more on its workers. The retailing giant needs people to start buying more stuff at Walmart stores. To make this happen, those stores need to be well staffed with happier workers. This is both common sense and proven by a body of research from business professors at the Massachusetts Institute of Technology, the University of Pennsylvania's Wharton School and elsewhere.

Indeed, for every $1 increase in total payroll, a store could see anywhere from $4 to $28 boost in monthly sales, according to a study of understaffing published in 2007 by Wharton professor Marshall Fisher, along with then Wharton professor Serguei Netessine and doctoral student Jayanth Krishnan.

Walmart desperately needs the lift. Even this economic recovery hasn't really helped the chain. Walmart's same-store sales, a key measure of a retailer’s health, declined 0.5 percent in 2014 from the prior year, marking the third year of decline since 2010.

For years, big box retailers like Walmart have said they need to keep labor costs as low as possible in order to keep prices low and maximize profits. But that strategy can be self-defeating -- and now some of these players are coming to their senses. Walmart announced last week that it would raise base pay to $9 and ultimately $10 an hour. On Wednesday, T.J. Maxx, Marshalls and other department stores owned by TJX Companies followed with similar pay increases. Last year, The Gap and Ikea also moved to increase worker pay.

"Retailers in the U.S. try to have the minimum number of people in the store at the minimum wage. I think that's a mistake," Fisher told The Huffington Post.

Forget the dubious ethics of paying people so little that they must turn to public assistance to get by. The strategy also hurts retailers -- underpaying and understaffing means stores miss out on revenue.

Better pay means, at a minimum, that fewer workers will leave their jobs at the first opportunity. Reducing turnover means that workers become more knowledgeable about what's on the shelves and, hopefully, that employees are happier. As Fisher and others note, this leads to a virtuous cycle: Happier, more knowledgeable workers make customers happier, and then they spend more money, which allows the store to pay its workers better.

Think about it like this: Ever go into a big box store looking for something and walk out frustrated after searching helplessly for what seemed like hours? Maybe you couldn’t find anyone to help you. Maybe a store employee was a little rude to you and entirely useless -- "I don’t know, ma’am, check over there [waves vaguely]." This happens all too often at stores that understaff and underpay, Fisher said. It leads to something he calls "retail rage."

Check out these charts from Fisher’s book with coauthor Ananth Raman, The New Science of Retailing. What you see is that customers who are happier spend more money. Seems obvious. Yet again and again, retailers lose sight of this -- cutting labor costs to meet quarterly budget goals and killing their revenue. "What is the crazy thought process that prevents senior executives from grasping the obvious?" Fisher asked. 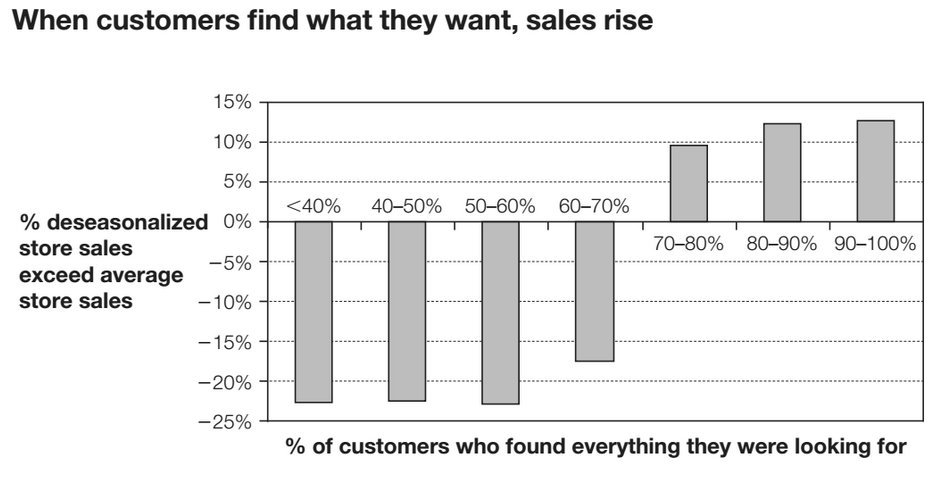 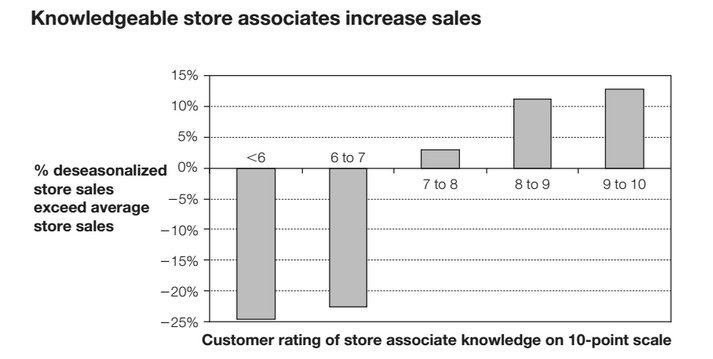 Last week, Walmart also made changes to the often-criticized way it organizes workers’ schedules at the last minute, making it extremely difficult for them to adjust child care, schedule doctor's appointments or pick up second jobs. Now Walmart has said that some workers will have fixed weekly schedules and that all workers will know their schedules at least two and a half weeks in advance. Those who want extra hours will be able to look up available shifts in their stores.

"We think associates will be more engaged and provide a better experience for customers in the store," Walmart spokesperson Kory Lundberg told The Huffington Post.

The scheduling moves and the pay increase were applauded by labor groups and workers -- though many noted that $10 an hour is still nowhere near a living wage. Labor groups have been fighting for $15 an hour. Workers and labor activists want Walmart to raise workers’ hours as well. A higher wage is no good if you can't work enough hours.

"If [Walmart] manages it right, they will greatly benefit from this investment," said Zeynep Ton, a professor at MIT’s Sloan School of Management. The author of the book The Good Jobs Strategy: How the Smartest Companies Invest in Employees to Lower Costs and Boost Profits, Ton said that paying workers better is a crucial first step for Walmart.

Ton’s research has focused on retailers like Trader Joe’s and Costco, companies that already pay workers well. Starting pay at Trader Joe’s is $40,000 to $60,000 per year, she noted.

Even more significant, she said, those retailers thoroughly train their workers. For example, all workers at Trader Joe’s know how to operate the cash register and how to stock the shelves; they're all conversant with the products on offer. That improves customers' experience, which is likely to lead them to buy more stuff. Here in New York, it's why we’ll stand in line for a long, long time to buy Trader Joe’s products (low prices help, too).

Ton said, "There is a way to operate a business so that everybody wins."