Walmart's PAC and the heirs to the company's fortune are spending millions to influence the political process -- and their money is often going to boost conservative candidates and causes, according to claims by a union-backed coalition pushing for more rights for Walmart workers.

The Walmart Political Action Committee spent more than $2 million influencing federal elections in three of the last five federal election cycles, according to a report released Tuesday by Making Change at Walmart, a group of advocates, Walmart workers and others aimed at transforming the company. The report also said that members of the Walton family, the billionaire heirs to the Walmart fortune who own over half of Walmart common stock and hold three seats on the company's board, spent more than $1.3 million on federal elections last year, along with hundreds of thousands more at the state and local level.

The report comes as Walmart is facing backlash from some within its workforce and as companies are experiencing increased scrutiny over donations in the wake of a Supreme Court decision that opened up their spending power to influence elections. It cited figures from the Center for Responsive Politics, a nonpartisan, nonprofit research group that tracks money in politics.

Brooke Buchanan, a Walmart spokesperson, emphasized that the Walton family and Walmart's PAC are different. She noted that 49 percent of the PAC's contributions went to Democrats in the 2011-2012 election cycle.

"Our giving is very equal between parties across the country," she said.

An e-mail message to a spokesperson for the Walton family was not immediately returned.

For example, during the last election cycle, the Waltons donated about $400,000 to Restore Our Future, the Super PAC associated with Republican Presidential Candidate Mitt Romney, the report said, citing data from the Center for Responsive Politics.

"This shows you the real Walmart," Bertha Lewis, an advocate associated with Making Change at Walmart, said. "They put their money where their ideology is."

The report’s findings may provide fodder for Walmart’s critics, who have derided the world’s largest retailer in recent years for paying workers low wages, a Mexico bribery scandal and its loose ties to garment factories in Bangladesh, which have been the sites of deadly disasters.

It's not uncommon for major companies to face scrutiny over political donations. Target, a Walmart competitor, changed its political donation policy in 2011 after facing customer backlash over donations to a controversial political group opposed to gay rights. Best Buy also stoked the ire of liberal customers for donating to the same group. And the health insurance giant Aetna donated more than $7 million to conservative political groups in 2011, according to a regulatory filing accidentally released by the company.

Corporate campaign donations have come under a spotlight in the wake of the Supreme Court’s 2010 Citizens United decision, which allowed companies and individuals to make unlimited contributions to groups supporting political candidates. Activists are pushing the Securities and Exchange Commission to require companies to report their political contributions in an aim to make the exploding practice more transparent.

Check out these charts on the groups' political contributions from Making Change at Walmart: 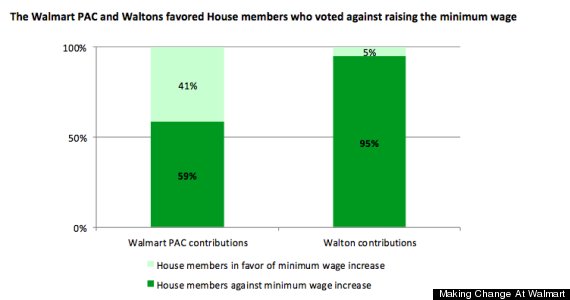 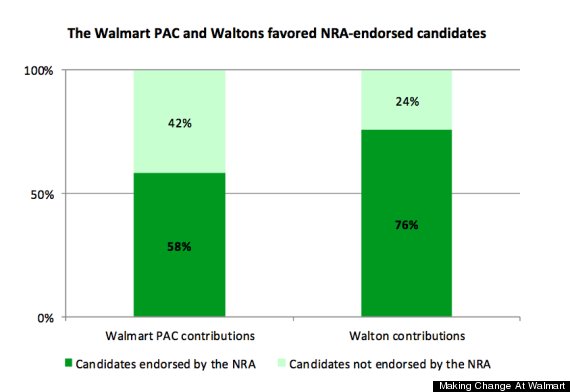