LOS ANGELES -- Warehouse workers in Southern California have filed a petition in court to name Walmart as a defendant in a federal wage-theft lawsuit, marking a significant turn in low-wage supply chain workers' fight with the world's largest retailer.

Although workers in Walmart's contracted warehouses in California and Illinois have alleged labor violations in the past, the filing on Friday is the first time Walmart itself has been directly implicated in the claims of abuse. Until now, only the retailer's subcontractors have been accused in court of shorting workers on pay and forcing them to work in substandard conditions.

"Walmart's name does not appear on any of these workers paychecks, and the Walmart logo does not appear on the t-shirts they're required to wear," Michael Rubin, the workers' lawyer, said on Friday. "But it has become increasingly clear that the ultimate liability for these workplace violations rests squarely on the shoulders of Walmart."

While Walmart directly manages much of its distribution network, the company outsources the operation of some of its largest warehouses to third-party logistics firms, which in turn hire low-paid temporary workers to perform the heavy lifting. These warehouses have become the target of a union-backed organizing effort through the groups Warehouse Workers United and Warehouse Workers for Justice, and several of them have been hit with employee lawsuits and labor-law violations.

In the case amended Friday, six workers at a Walmart-contracted warehouse in Riverside, Calif., sued a series of subcontractors last year, claiming they were paid less than the minimum wage, required to work in excessively hot conditions and retaliated against by superiors as they loaded and unloaded trucks and containers. Although the workers said the products they handled were destined for Walmart stores, the mega-retailer was not originally named in the suit.

Worker advocates have argued all along that Walmart, as the top company in the contract chain, is morally responsible for the working conditions at the warehouses its goods pass through. By trying to bring Walmart into the lawsuit now, they hope to prove that the company is legally and financially responsible as well, arguing that Walmart controls the operation and serves as the ultimate beneficiary of the work.

"I know that Walmart is responsible for all of this, even though they say they have nothing to do with us," said one of the plaintiffs, David Acosta, speaking in Spanish on a call with reporters Friday. "The boxes say Walmart, the containers say Walmart -- everything belongs to Walmart."

Walmart spokesman Dave Tovar has said the company has made a "business decision" to no longer comment for Huffington Post stories, "due to the one-sided reporting and unfair and unbalanced editorial decisions."

Acosta said he and his colleagues, many of them Latino immigrants, worked 12 to 16-hour days, earning roughly the minimum wage without overtime pay. He said they received a lunch each day but no other breaks. "Our dignity was thrown to the floor," he added.

The success or failure of the suit could have broader implications for workers who try to sue subcontractors. As HuffPost reported last year, much of the retail sector's supply chain is now predicated on a system of outsourcing, where larger, brand-name players subcontract the work to smaller, little-seen players, who ultimately hold the legal liability for workers' well-being. A similar arrangement now persists in many food-processing and manufacturing operations as well.

According to Rubin, the workers are seeking class-action status for their lawsuit, which could involve up to 1,800 affected workers. Rubin argued Friday that the workers are on sound legal footing in suing Walmart, even though the company does not directly employ workers at the facilities.

“Walmart controls the warehouses and everything that happens inside of them," Rubin said. The retailer, he said, pays "extraordinary attention to details" in the warehouses, including tracking where every truck and container is and what every worker is doing and how much time it takes them to do it.

"[Walmart] owns or leases each of the warehouses at issue in this litigation. It owns all of the equipment and supplies used in those warehouses, from the forklift to the shrink wrap," he continued. "We allege Walmart has turned a blind eye to systemic violations of worker rights."

Walmart has said repeatedly in the past that the warehouses involved in the suit are operated by other parties and that the company takes the allegations seriously even if it isn't responsible for them. Several workers at the warehouses in California went on strike ahead of the high-profile walkouts and protests at Walmart stores on Black Friday.

The suit filed in California last year included among its defendants the Walmart contractor Schneider Logistics, which has been named in similar suits filed by workers in Illinois. Many of the employees were employed by a firm contracted by Schneider, working for "piece rate" -- being paid according to how many containers they loaded or unloaded.

The lawsuit alleged rampant abuse, claiming warehouse employees "spend their workdays performing strenuous, unskilled physical labor in an environment where the temperature often exceeds 90 degrees," where management "routinely responded with threats of retaliation and actual retaliation, including by sending the inquiring workers home without pay, refusing to give them work the next day ... and imposing other forms of discipline on them."

Schneider has denied the allegations in the suit.

Prior to the lawsuit, the California labor commissioner filed a number of labor-law citations against temp companies operating within the warehouse, saying many workers weren't given complete paystubs for their work. The commissioner, Julie A. Su, told The Huffington Post at the time that the alleged violations epitomized broader problems with subcontracting in the low-wage economy.

"Warehouses are one example of the ever-increasing contracting out of labor. It's difficult for enforcement, and in many instances it's a deliberate effort to avoid compliance," Su said. 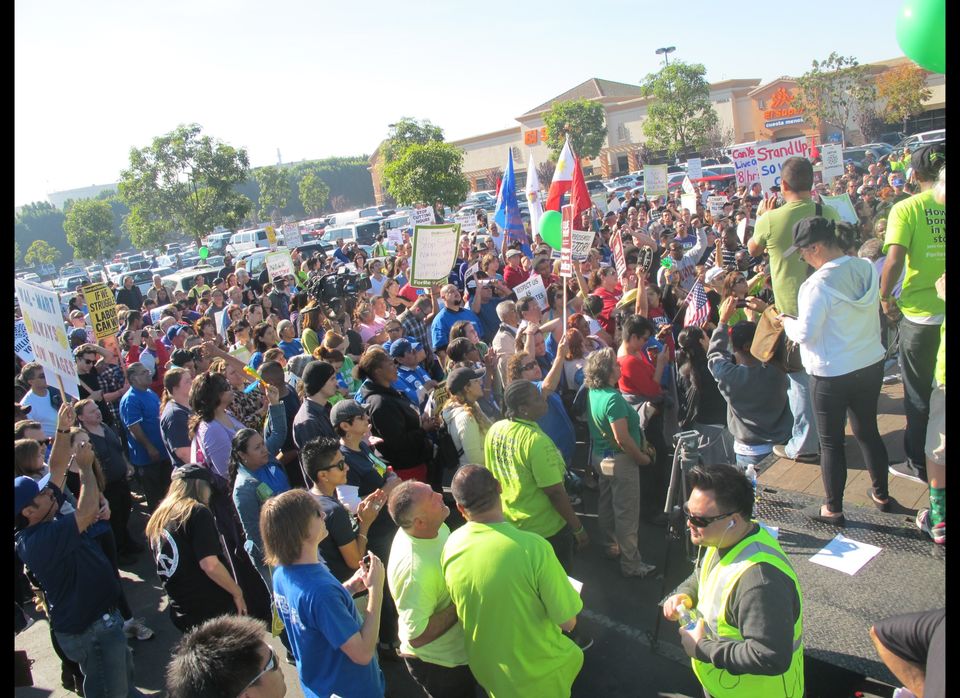 1 / 40
Walmart Strikers
At the Walmart in Paramount, Calif., The Huffington Post counted about 600 protesters at 11:30 a.m. Friday. Organizers later said that a total of 1,500 people participated in the protest. Nine people were arrested for sitting in the street, which was blocked off for protesters. Arrestees included three Walmart workers, a father of a worker, a former worker, two clergy and two other supporters, according to organizers.
Kathleen Miles