As the saying goes, "When we fight, we win!" 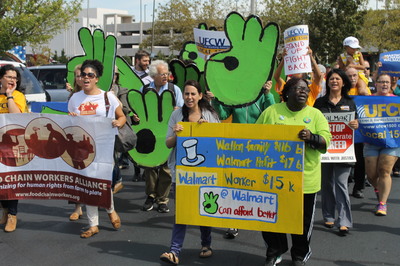 Walmart workers who are members of the Organization United for Respect at Walmart (OUR Walmart) demonstrated this clearly with two recent victories. First, Walmart is instituting a new scheduling policy that will allow workers to know when additional shifts are available and sign up online for them. This is important as many Walmart workers are part-time and struggle to support themselves and their families on too few hours.

The second victory is due to OUR Walmart's "Respect the Bump" campaign, led mostly by women Walmart workers with support from women's organizations. Walmart announced it will now ensure that women with pregnancy-related complications are given some basic accommodations that will help them keep their jobs and provide for their families.

How did they win these victories? With a lot of organizing! Walmart workers reached out to their co-workers in the stores where they work and throughout the country. They organized protests and went on multiple strikes, including on Black Friday the past two years. They went to Walmart's annual shareholder meetings in its hometown of Bentonville, Arkansas. The workers led delegations to store managers and started a national online petition. They asked for and gained the support of allies in the labor, faith and progressive communities. Walmart still has much to do, including raising wages, increasing access to full-time hours, ensuring a minimum annual salary of $25,000 as OUR Walmart is demanding, and ending retaliation against workers who speak up, but these victories are a step in the right direction.

So now the question is, will Walmart also require their suppliers to institute these same policies -- and more? For example, workers in Walmart subcontracted warehouses report that they often are employed by temporary staffing agencies and don't receive full-time hours. Some workers don't know if they have work the next day, and many are employed as temp workers for years. In the Inland Empire in Southern California, temp warehouse workers are usually paid the minimum wage (in California, that's $8 per hour) and earn a median annual income of $10,067.

Female Walmart warehouse workers have also reported that they are expected to do the same heavy lifting as before they became pregnant, or they get fired. Marta Medina is a member of the Warehouse Workers United (WWU) campaign in the Inland Empire. When she became pregnant, she said "I thought they would give respect me now, but it didn't matter to them. I had to work the same." One day, a shipment for Walmart came in, and she was ordered to move 2,000 boxes in one hour. These are just a few of the many exploitative conditions that these warehouse workers face.

As a company that earned over $17 billion last year, Walmart's sheer scale in size means that it has inordinate power over the companies down its supply chain, and it can and should require its suppliers to adopt the same policy changes it's making in its stores.

Members of WWU, Warehouse Workers for Justice in the greater Chicago area, and New Labor, a worker center in New Jersey, have joined with OUR Walmart members to rally together to demand that Walmart be accountable to its store employees as well as the workers in its supply chains. This is the kind of solidarity and mutual support that is needed to win justice from a multinational corporation like Walmart. Even with their recent victories, I know that the OUR Walmart members will continue to support the warehouse workers and other workers throughout Walmart's supply chain.