It was around this time last year that I baked my first loaf of no-knead bread. No, I wasn't the first. When, in November of 2006, no-knead bread was sweeping the Internet cooking world, I was living in a dorm room. I had no oven, no place to keep flour, and no covered Pyrex or cast iron pot for baking. Even if I'd heard about the phenomenon, which I didn't, I wouldn't have been able to do much to hoist myself onto the rapidly expanding bandwagon.

When I moved into apartments of my own, I tried out some bread. I made whole wheat and oatmeal loaves from my mom's old Laurel's Kitchen bread book. Though the scent of the yeasty doughs rising and baking subsumed the tiny place in remarkable smells, I found I didn't always get through a whole loaf, and it all seemed more work than it was worth--especially sweeping up the endless sprays of flour from the apartment that were a result of doing my kneading at the coffee table.

When I came back to the no-knead recipe, it was making a slight resurgence on the internet due to the publication of Jim Lahey's book. I had also just become the proud owner of two Le Creuset pots (thanks, mom), and I got to work mixing, rising, and baking--never kneading--right away. 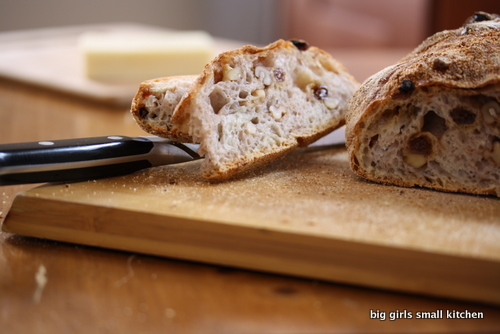 A year later, and it still hasn't gotten old. In fact, were I one for New Year's resolutions--I'm not--it would be to make more loaves, and all different kinds. I've gone through phases where I make one, even two, loaves a week. But I also go through months that are sadly free of the fresh bread scent. Maybe one day, I'll be the type of person who grows sourdough starter on my countertop and carefully nurses it so it's always ready to create bread.

For now, I'm back to no-knead bread. This version, which I made on a whim recently, is beautiful and hearty. The crust hides a bundle of raisins and walnuts, and it is just delicious toasted until golden and spread with salted butter. Its schedule fits with weekend mornings, especially. I like to start the first rising before I go out Friday nights, then set it on its second rise as soon as I can get out of bed. By the time I'm caffeinated and really up, the bread is ready. And no, I don't wait for it to cool before cutting in. 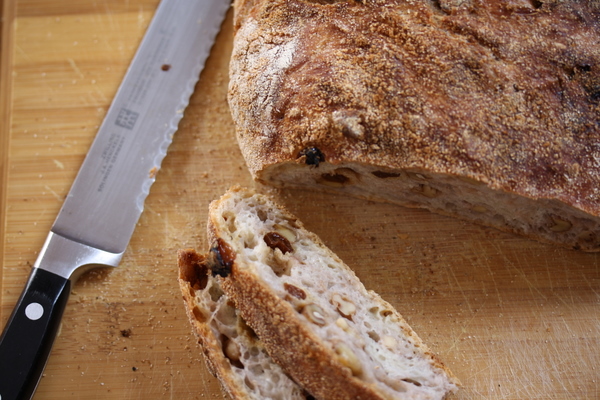 Combine the flour, yeast, and salt in a large bowl. Add the walnuts and raisins and stir to distribute. Pour the water over the flour mixture, then use a rubber spatula to mix them together and form a soft, ugly dough. Cover with plastic wrap and leave to rise for about 12 hours, until there are bubbles across the top.

When there's a half hour left to go of this rise, preheat the oven to 450°F and put a covered, heavy pot in the oven.( I use my 5.5 quart LeCreuset to achieve a well-proportioned loaf.) When the dough is ready, carefully take the pot out of the oven. Dump the dough, seam side up, into the pot and shake it to spread evenly. Cover and bake for 20-30 minutes. Uncover and bake for another 15-30 minutes, until deeply brown and crusty. Let the bread rest as long as you can before slicing into it.

I store my bread in an airtight baggie, even though this makes the crust soft. To "re-crust" a whole loaf, you can dab it all over with water and bake for about 10 minutes in a 450°F oven. If you're going slice by slice, just toast to rectify the crust.