Ever wonder what a walrus does when he thinks you're not looking?

You can now tune in to see on a round-the-clock walrus camera, thanks to Explore.org, a nonprofit run by the Annenberg Foundation. The live stream gives viewers a peek into the world of walruses lolling about on the beaches of Round Island, Alaska, which is part of the Walrus Islands State Game Sanctuary.

Pacific walruses spend the winter on the pack ice of the Bering Sea, according to the Alaska Department of Fish and Game. In the spring, the adult females and their calves head north to the Chukchi Sea, while the adult males migrate to Bristol Bay, where Round Island is located.

When they’re not eating, the males take their ease on the bay's rocky beaches. According to an Explore.org news release, the walrus cam shows the creatures sleeping, fighting, playing and even partaking in a little walrus “me” time.

“These cams help us extend our mission of conservation and education,” said Maria Gladziszewski, acting deputy director of the Alaska Fish and Game Department's Division of Wildlife Conservation, in a statement. “We are thrilled to share our work with a larger community of people and grateful to explore.org for the opportunity.”

The walrus live feed is just one part of Explore.org’s Pearl of the Planet initiative, a collection of animal cams from around the world. If you get sick of watching walruses (why would you, though?), you can also check out kittens, penguins or -- one of our favorites -- puffins. 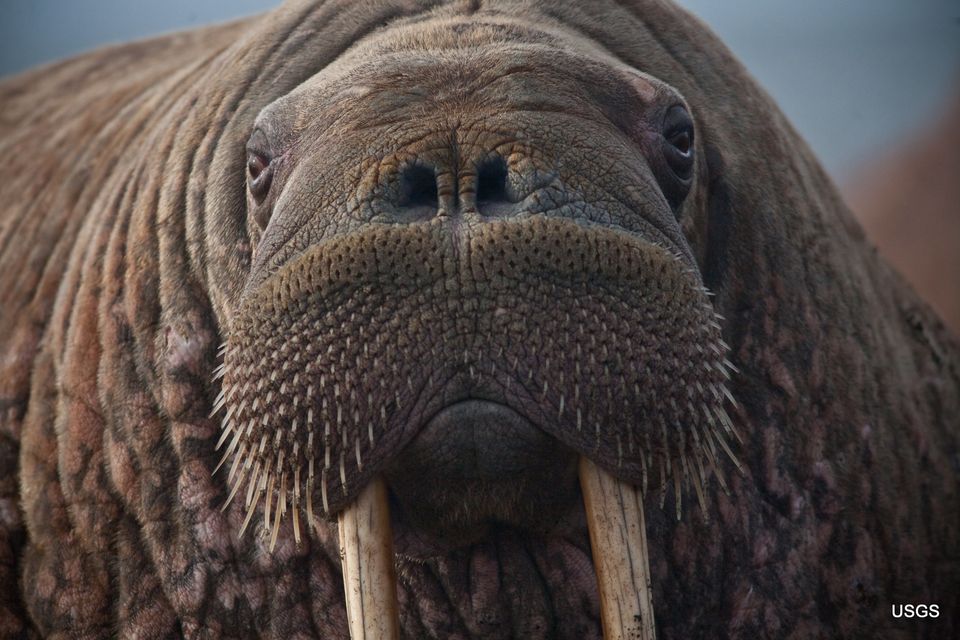 1 / 21
A Face Only a Mother Could Love?
A close up of a female walrus resting after entering the haulout. Sand from the beach is evident on her tusks. Thousands of walruses gathered to rest on the shore near the Alaskan coastal community of Point Lay during September of 2013 after sea ice disappeared from their offshore foraging grounds in the eastern Chukchi Sea. The Pacific walrus is a large pinniped, resident in the Bering and Chukchi Seas of Russia and Alaska, and is one of four marine mammal species managed by the U.S. Department of the Interior. Walruses feed on clams and a wide variety of other invertebrates from the seafloor. They rest between feeding trips on sea ice or land. Sea ice provides walruses with a resting platform, access to offshore feeding areas, and seclusion from humans and predators. The constant motion of sea ice transports resting walruses over widely dispersed prey patches. (Photo taken during USGS research efforts permitted under US Fish and Wildlife Service Permit No. MA801652-3) Location: Point Lay, AK, USA Photographer: Ryan Kingsbery, USGS
U.S. Geological Survey/Flickr