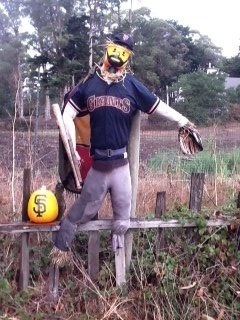 Game tied, bottom of the ninth. Two runners on base, and any one of us scoring now means we win the whole enchilada. The pennant hangs in the balance. But I can't afford to even begin to think of that right now. The pitcher has been throwing hard and well and I've let a few go by, both balls and strikes. At his speed one has to make the decision to swing just as the ball leaves his hand, and hope for a best guess on what is coming and where it will pass. The crowd has been roaring like a pack of Blue Angel jets overhead but I've tuned that out, and it's just that windup, a short 90 feet away, and the white blur of the pitch, like a comet headed my way. Years of training and study and endless practice with both real pitchers and pitching machines, and it still comes down to this second, tuning out all distraction, blocking out everything but the incoming pitch, ignoring that dozens of colleagues are holding their breath and maybe millions of fans likewise; just focus and make that split-second decision.

He throws; everything goes silent; as if a gift, that rare but wonderful phenomenon where things slow down in a surreal slow-motion-type vision descends upon me and I see, for a split second, without a real thought, that he has perhaps misjudged a call from his catcher, maybe even slipped up a bit in his delivery, this is one I can probably hit, and I swing. The thwack of the wood hitting the ball is solid, loud, feels right as it vibrates down the bat to my hands. I know I connected hard as I drop the bat and begin a few steps towards first, looking up as the ball heads high and begins to descend. The sound in the stadium has reignited but I am still focused on that ball, seeing it go as high and far as I could hope, and glancing at my teammates out on the baselines, both halfway out between the bases, waiting to see if the ball is caught and they have to go back or can run like hell for the next bases, or maybe even home for the win.

There's a moment where all hangs in limbo and then we all see the fans' hands reaching up in the stands, the ball dropping into the stands, it's gone, that's it, we win, the roar is intense, I am rounding first as it sinks in what has just happened and then second as it becomes reality and then third as in a dream and coming home where a mob is gathering, everybody shouting and jumping with joy and I am about to be mobbed and even dog piled by all my big colleagues and I have no idea how to think of what and even about how I am really feeling right now, every icy of my skin is tingling and my hair standing on end and even now I can sense that I have never been and will never again be as intensely ecstatic as I am at this moment, and very few people ever have been so blessed as to feel like this anytime in history, amen.

All that really happened, more or less, just last week, but alas and of course it wasn't me out there at the plate, it was San Francisco Giant Travis Ishikawa, sending his team to the World Series against so many odds and expectations, including likely his own, as he'd just recently not even been on the field and barely on the team. But for a second there my mind slotted me into his place, and it was me hitting the homer and getting the glory. I admit it. And I expect - heck, I know - that countless other people, mostly men, had a similar experience of some kind, whether they admit it or not.

At that moment, more Americans probably wanted to be Ishikawa than anybody else alive. It's not really envy, or any coherent wish, but a human fantasy reaction of "what must that feel like?," rooted in boyhood experience and dreaming, and then we come back from glory to reality and our lives, for better or worse. If it's for worse, it's the pathetic sorry sadness of fictional Walter Mitty, the would-be war hero/surgeon/assassin office worker, forever immortalized by James Thurber in a short story in 1939. But for most of us it's a harmless, even fun flight of fancy. So I admit it, I'm a Walter Mitty, sometime.

Not that I really have any regrets about my own long-gone baseball non-career. I had fun, in little league and in unofficial games. I was a decent enough player, given my small stature - a fast runner, decent hitter and fielder, usually playing third base or outfield. My accurate and fast throwing arm was probably my best feature, at least in the infield (very long throws from the far outfield were more difficult), and I'd even done some pitching. Some of my best pals were much better overall and I was never among the first chosen for teams, but wasn't shamed in that ruthless process either.

Then one year I unaccountably found myself on the All-Star team. Much later I wondered if my dad, a big shot in town, had given some money to the local league officials or something to help bring this about, but that was absurd - I think he was barely even aware I was playing, caught up in his own business and travels. My parents had never even come to see me play, which was fine by me - I would have been too self-conscious with them there. But somehow they found out I would be in the All-Star game - OK, I might have let that slip at dinner or something - and he was in town, so they showed up. I was at third as the game began. Playing third struck me as the most intense position after catcher and pitcher, and some called it the "hot corner" as the line drives from right-handed hitters would come at you so fast there it was almost like hitting pitches, but instead trying to catch them or at least knock them down and keep them in the infield. And it was a long throw diagonally across the diamond to first, often with no room for error or delay if the runner was halfway fast. In the All-Star game there were batters from all over the area we didn't know, so we were told to assume they were all hard-hitters and to play well back and ready. And the first guy up, one of the strangers, was indeed a big, tall guy.

The first pitch of the game came; I was crouched down, waiting, and he smacked it hard and a bit to my left, so I was able to hop over without too much of a stretch and grab it on one bounce, set myself for the throw, and fire it as hard as I could towards first. Everything went sort of white for a second and I barely heard a cheer, not knowing if the runner was out or safe over there. All I knew was that something was wrong in my body, mostly my throwing elbow, but really all over. I just stood there, stunned, feeling pain like I'd never felt radiate up and down from that spot. I must have stayed immobile for some time, as soon I noted that our pitcher was winding up again, and another batter was in the box, ready. Mutely, I just turned right and walked over the base and towards the side of the field. Soon enough somebody noticed and yelled "What the heck are you doing?" I couldn't even reply. I just held my elbow in my glove and shook my head. It hurt too much to even cry (that would come soon enough). It turned out to be pulled ligaments, and that arm was in a sling for weeks, and that was the end of my baseball career. My parents got to see one pitch, one play. Thankfully, it turned out that runner was indeed out.

No longer that into playing, as adolescence was coming on anyway, I did one stint as an umpire the next season. That was fascinating, but not so fun when friends gave me grief about calls they didn't agree with. What were worse, though, were the truly Mitty-ish dads, pathetically living through their embarrassed sons, who yelled and bullied me and made fun of my slightly-lengthening hair: "I didn't know GIRLS could umpire," taunted one sad case. I even forfeited one game when the players intentionally kept throwing their bats while smirking at me and I borrowed a tactic from major league player and broadcaster Joe Garagiola's famous book Baseball is a Funny Game: "If that bat hits the ground, your team loses." Power! That caused a near-riot and soon after I was outta there, as it just wasn't worth the minimum wage and aggravation and paranoia - I had scary fantasies of angry dads waiting for me on the walk home after games. Maybe my big dad's reputation in town did save me there. In any event, from then on it was just random pickup hardball and softball games, as we moved through our teens and many of my cohort evolved into drug dealers, drunks, scammers and sailors, bringing cases of beer and other bottles and all manner of illegal substances to the games but still playing seriously and with skill. That all faded away too with time, as the nearby waves and other distractions became ever more compelling.

Now I just just watch, being, like many others in San Francisco, a fairly fair-weather fan. If I actually go to the lovely and ever more expensive and segregated waterfront park, the relentless blare of commercials and terrible songs - I mean, Journey? - and silly chatter over the overly-amplified loudspeakers mostly irritates me, as do many of my fellow fans with their ever-constant cameras and phones and blather. It seems anything resembling a quiet moment is a sin against capitalism and modern baseball, or something. On television, it's not much different, although one can control the volume if not in a dreaded "sports bar." The three TV and radio announcers - when I was a kid, there was only one guy announcing the Dodgers games, Vin Scully, and he was plenty - rattle off endless ridiculous statistical trivia, just because they can: "That was the sixteenth left-handed Hispanic hitter to swing at a low curve from a rookie right-hander in post-season game with two outs and a man on second and one relief pitcher warming up in the bullpen with ...." etc etc and so on, almost all of it silly and meaningless stuff, a curse of technology. Either way, the commercials and sponsorships and so forth are in your face and hard to tune out. The players, far from being the loyal team we wish they were, are all super-highly paid businessmen raking in much more from the sponsors and others and ready to jump to the next higher-paying team at the drop of another million or so dollars.

It's just the way it is now. And yet still I'll jump at any opportunity to show up and see it all happen, nonetheless. I mean, a man can dream, right? Anybody got a line on some good World Series tickets?

(and on a serious note - anyone who donates blood this week in the Bay Area can get a free "I Bleed Orange" Giants t-shirt, while they last - see http://www.bloodcenters.org/ 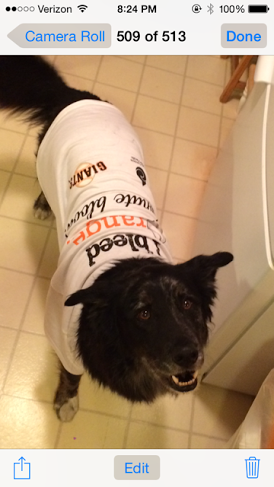