Have you ever gotten in your car to go to a meeting, date, or appointment, only to realize that if you left right then, you'd arrive at your destination way too early and end up waiting around for 35 minutes, twiddling your thumbs and pretending to send text messages?

Wanderous, a new mapping and GPS app for iPhone with a focus on local discovery, is a potential fix for that all-too-common conundrum: It's a turn-by-turn directions app that supplies you with detours to historic or intriguing places nearby to your route. You enter in your starting point and destination and Wanderous spits out directions, along with three or four parks, landmarks, or historical corridors that are close.

So, for example: When I requested directions from Union Square to a restaurant on St. Mark's Place, Wanderous advised me to check out the Stuy Town housing complex (with an accompanying Wikipedia article), a section of Greenwich Village just east of Washington Square Park, and a small neighborhood of the East Village just north of Houston. (While this is assuredly gobbledygook for any non-New Yorkers out there, know that these are separate, distinct areas of a certain part of Manhattan that are not unreasonably far off the route from Union Square to St. Marks).

The app, which is available for free on iOS, is similar to another app we've profiled called Drift, in that it also invites users to rediscover hidden gems in their own neighborhoods. Instead of giving randomized directions, however, Wanderous specifically points users to historical and tourist spots, offering up the kind of location-specific information that the recently released Google Field Trip for Android also provides.

(Perhaps we are unsatisfied with the status quo, or bored by our daily routines. Or, maybe -- and this is the optimist's case -- we are, at heart, an inquisitive people, and a smartphone can help us unlock that curiosity).

Wanderous presents its route overlaid on the new Apple Maps interface (which, yes, means it is susceptible to all of the location mishaps of that infamous service); also overlaid are several icons representing Flickr photos taken at a certain location, correspondent Wikipedia articles and Foursquare check-in points. In New York City, these can overwhelm the terrain somewhat, though in smaller cities and towns, I'm sure the density is not so dramatic.

In addition to its Foursquare integration, Wanderous also has a "check-in" system of its own: You are able to "plant flags" at checkpoints you've wandered to, and a section of the app displays the points-of-interest you've hit in the past.

Wanderous only recently launched in the App Store, and for now it is light on features. There's no method to choose just how far or for how long you want to wander, or filter out Flickr photos or Foursquare check-ins if you don't want to see them; nor can you specify what kind of attractions you're interested in. For now, you can just receive directions and check off the boxes of attractions that intrigue you to customize your route.

Hopefully Wanderous comes with more precision in future updates. For now, however, it's a clever utility to help you discover more of what's around you and get lost on your regular routes -- not that, if you're using Maps in iOS 6, you needed any help with that, anyway. With Wanderous, at least, you'll learn something and perhaps be amazed at your surroundings.

You can download Wanderous for free in the App Store. 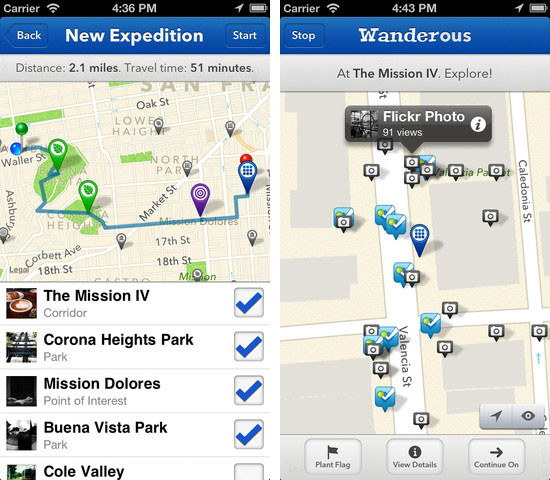