By Wanjira Mathai and Jamie Bechtel

The world unites to honor the European Union 2012 as the Nobel Peace Prize is bestowed upon the governing body for its hard work, over the past six decades, in maintaining stability in Europe. This prize has been won by presidents and peace activists alike, all of whom have dedicated their lives to peace, conflict resolution, and international stability. Eight years ago, Dr. Wangari Maathai became the first African woman to win the prize for her work demonstrating the intricate links between the environment, democracy and peace through Kenya's Green Belt Movement. As the world honors the new recipient of the Peace Prize, we would like to pause and reflect on the many brave women of Africa, and around the world, who work every day to preserve and foster peace. They do this in a way that does not, at first blush, seem to have anything to do with peace because they are the stewards of our world's natural resources.

For so many of us, environmental stewardship is a luxury. But for millions of people around the world, the environment provides the basics of survival including food, water, energy and medicine. When natural resources are lost through climate change and poor resource use, war and conflict increase dramatically. The Nobel Prize committee understood this, and bestowed one of the world's most prestigious prizes on Wangari Maathai for planting seeds of peace. Those seeds led to environment, economic and political stability, which translates directly into conflict mitigation because when people have food, water, and a safe, warm home - they don't have to fight to survive. In short, Dr. Maathai was able to show that environmental protection is a two way street: the loss of natural resource drives war and conflict, but the restoration of natural resources drives peace and security.

When Maathai founded the Green Belt Movement in 1977, her goal was simple: help improve the lives of rural women (and men) by improving the environment on which they depend for water, food, fuel, and medicine by planting trees. The unexpected impact of her work was to show that the solutions to our many societal and planetary ills often rests with those who bear the greatest burden. Her legacy has empowered a whole new generation of women to take actions that benefit their communities and the planet. Maathai's lessons have never been timelier.

Today, we are happy to announce that the legacy of Wangari Maathai's work will continue bolder and stronger than ever. The Green Belt Movement, in partnership with New Course, has been awarded another important award, the MacArthur Foundation partnership grant. This grant will provide training to rural women and community-based organizations that will build the skills that improve women's participation and influence of environmental governance, develop climate resilience, improve natural resource management and help establish cultures of peace.

This grant is extremely important because across Africa women are on the frontlines of conservation challenges and they experience environmental impacts in very real and serious ways. In 2011, a deadly drought-induced food crisis across East Africa claimed tens of thousands of lives and left millions destitute and hungry. The deadly impacts of climate change and the results of poor land use are being felt now in East Africa, as they are in many regions around the world. Global warming will continue to increase the volatility and unpredictability of weather patterns, further threatening the food and water security of the rural poor. 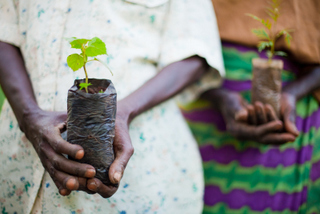 Wangari Maathai knew that the role of women in environmental stewardship is powerful -- it is time the rest of us understand this. There are still major gains to be made in combating climate change, improving livelihoods, reducing natural resource conflict and advancing community health because half of the people with solutions have been largely excluded from the process. Unlocking women's potential as "green agents of change" is necessary to realize the full potential of investments in conservation in the region, and around the world and to ensure the long-term sustainability of our world's natural capital. Action by governments, corporations, civil society, philanthropists and communities must be taken now and that action must include women. This is not only the economical thing to do; it is the morally responsible thing to do.

The Green Belt Movement is a grassroots non-governmental organization that marries environmental conservation and community empowerment in Kenya. Founded in 1977 by Prof. Wangari Maathai, the Green Belt Movement promotes sound natural resource management and livelihood improvement through tree planting, women's rights, civic empowerment and good governance training throughout Africa. Her legacy has empowered a whole new generation of women to take actions that benefit their families and the planet.

New Course is a non-profit organization based in Seattle. It works with partners worldwide to ensure that women are systematically engaged in environmental efforts.

Co-Founder and CEO of New Course