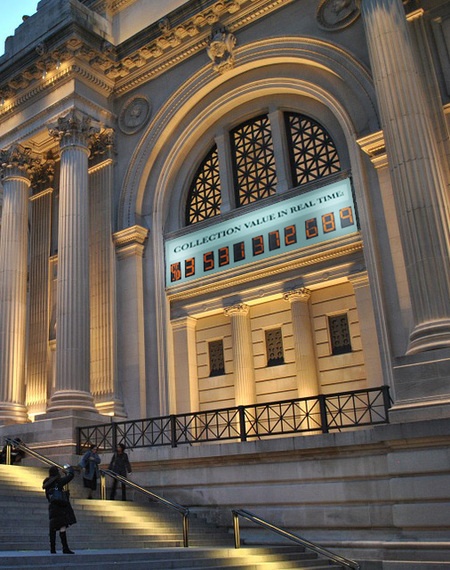 For all kinds of reasons, including many very good ones, art museums tend to be secretive about the value of the art and objects they have on display. Concerns about theft, insurance and terrorism make the disclosure of art values undesirable, and when museums collect purchase prices are rarely reported or confirmed. Art museums want visitors to enjoy their exhibitions for the right reasons--aesthetic and cultural ones--and information about the cash value of art is naturally seen as more than just a security issue: it is also a potential distraction that detracts from the real considerations of artistic merit and historical significance.

Still, dollar amounts make the news from time to time, as in the recent reporting of accidental damage done by a visitor to SFMOMA to a Warhol painting valued at $80 million dollars. If the damage had been done to a painting worth less than a million, the incident might not have been so widely reported, a fact that highlights the public's voyeuristic interest in pure cash value. The staggering prices of individual works of art are a source of fascination. Standing in front of a single painting and thinking "It would take me 40 lifetimes to make enough money to buy that..." is a mental exercise that is hard for most of us to resist.

The total value of major museum collections is also rarely discussed and the result is broad speculation. For example, if you want to know the total value of the holdings of New York's Metropolitan Museum of art, all you will find are very, very rough estimates, like this one of $100 to $400 billion dollars. Somewhere, deep in the database of an insurance company, the real figure lurks...

News about the art market is full of dollar amounts especially when spectacular auction results are achieved. In fact, stories about high prices for works of art often dominate the art and culture section of newspapers, crowding out reviews and profiles of artists. Although the barrage of headlines about stratospheric art prices might appear, on the surface, to be a bad thing, at least one prominent museum leader recently pointed out a possible silver lining.

Novelist Isabella Rothschild, a member of the famed banking family and the first woman to serve as the chair of Britain's National Gallery, recently told The Telegraph that although she was conflicted by the high prices that paintings are bringing at auction, she has also noticed a benefit: "...There's been huge growth in visitors to our national museums...In some ways these big prices and all the stuff written about art is driving people in to look at it."

It makes sense, doesn't it? In idealistic terms, museums want people to visit to improve themselves through the experience of art, but it remains uncomfortably true that part of the reason that museums draw crowds is because they are treasure houses. Part of the experience of works of art is undeniably the chance to be in the presence of things that, for most of us, are unattainable in material terms. In particular, the recent appearance of many new and expanded museums of contemporary art has certainly co-incided with an explosion in values for key works, a more than co-incidental dynamism.

Perhaps it is time for museum directors and curators, especially those with lagging attendance, to reconsider their traditional views on disclosing and discussing value. Using the tools provided by recent information technology, there are now some new and striking ways that the values of works of art might be transmitted and integrated into the museum experience.

- The total cash value of an institution's collection could be displayed over it's entrance electronically. Connected to a database, and updated--via an algorithm--by auction results and other pertinent economic indicators, this figure would be a tremendous source of fascination and discussion.

- Label each work with its current value and any available information about past value.

- Select works of art could have scan codes on their information tags that could link, via smartphone, to prices histories and databases for the artist. Wouldn't it be interesting, for example, for museum visitors to have access to recent auction values for works by Rembrandt?

- Shows could be curated with themes that open up comparisons of dollar value versus aesthetic value. Some examples might include "The Billion Dollar Warhol Show," or "Eight Canalettos Equals One Gerhard Richter."

- Traditional museum panels could be supplanted by "The Price is Right" art value guessing programs, broadcast as reality shows. They would have real educational value as they would bring up aesthetic, social and economic issues.

The possibilities are limitless, aren't they?

If some of these ideas seem irreverent, impractical or vulgar, there is something else that should be considered. Perhaps putting the prices of works of art into the spotlight, rather than trying to keep them secret, would cause museums, curators and collectors to deal more publicly with the economic forces swirling around their institutions. Making prices public would certainly boost museum attendance, and it might also force a new kind of healthy self-consciousness for everyone involved.