Imagine waking up one day and realising that everything that you had thought to be true wasn't, and that the picture that you had of success - the same one that you'd seen countless times before on TV, in the movies, and read or heard about from trusted people around you - was all an illusion.

How would you feel?

I felt all of those things. It was December of 2006 when I woke up in a hospital bed in a room that was cold, dark and sterile. I was dazed and disoriented as the numbness on the right side of my head, where a scalpel incision left a freaky scar and thirty or so stitches, was wearing off and being replaced by a painful reminder that five hours of surgery had passed and life as I knew it had drastically changed.

So what the heck had happened?

I had followed the rules. I worked extremely hard to graduate with a university degree (I was the first in my family to do so in Australia), I had a well paying job and within a few short years I had ascended the ranks within the company whom I wore the logo for proudly on my business shirt.

Success sure didn't look anything like I thought it would. Instead of sipping mai tais on the beach I was sipping orange juice out of plastic cups alongside tasteless food in hospital.

That's when my search for truth and real happiness began, and during my search I've come across many teachers.

One of the most influential teachers I've come across is Dr John Demartini. 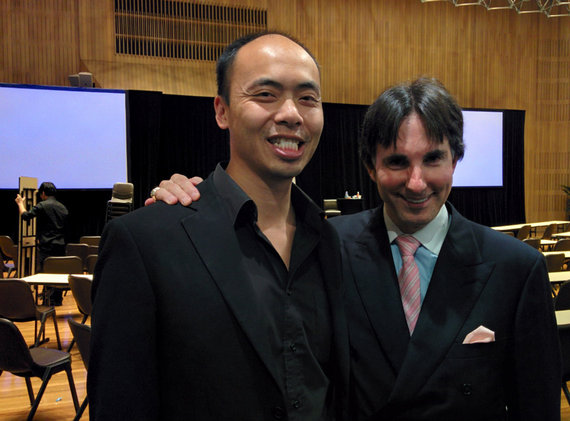 (That's me with Dr Demartini at his Breakthrough Experience event in Sydney, June 2014)

Dr Demartini is a human behavioral specialist, author, educator and founder of the Demartini Institute, a private research and education organization with a curriculum of over 72 different courses covering multiple aspects of human development. He travels 360 days a year to countries all over the globe, sharing his research and findings in all markets and sectors. He is the author of 40 books published in over 29 different languages.

I first discovered Dr Demartini when I watched The Secret in 1997. Seven years later I found myself on a Google Hangout interview with the man himself and I was curious about his thoughts on authenticity and influence, and the relationship that they have with happiness.

To live happily and authentically we need to understand our values.

According to Dr Demartini it all comes down to values - the more that we are aligned with our core values the more fulfilling our lives are.

"Everybody lives by a set of priorities, a set of values, and when they live by the highest priority values, which their identity revolves around they're more congruent. When they subordinate to people on the outside and try to be somebody other than who they are, by living into social idealisms or living by other authority's ideas, they end up robbing themselves of this power. Their fulfilment levels will be down and they will be searching for something else."

Additionally, Dr Demartini believes that everything that happens in our lives - whether perceived as good or bad - act as natural feedback mechanisms that serve to direct us towards living true to our values.

"Anytime we're not being true to ourselves, not being integral, not being congruent, not being authentic, our fulfilment goes down. All the feedback from our life all points us back to being our self."

When we are living according to our highest values we demonstrate leadership.

"A person who is living congruently and being authentic is one who becomes an exemplified leader automatically."

In an event I co-facilitated last week in Sydney I challenged the notion that influence had anything to do with being "good" or "bad", "right" or "wrong". It's the people who are living authentically who are best able to influence others.

Consider Nelson Mandela and Adolf Hitler - would you argue that neither were (or still are) influential as a result of who they were when they were alive?

You'd be hard pressed to find anyone who would.

We are naturally drawn to those who stand up for what they believe in because they demonstrate courage, vision, purpose and they do not allow society and people around them to dictate how they should live their lives.

Disclaimer: For the record I am not advocating that genocide, fear campaigns and war is the way to go. It's important to consider possible consequences of all decisions we make. Before making a decision we need to ask ourselves "is it ecological - for benefit of self, others and planet?" If the answer is "yes" to all three then I believe we're doing good.

Inauthenticity is not sustainable and can lead to pain.

Have you ever experienced what it's like to live a lie? It requires a lot of work doesn't it?

From experience it takes a whole lot more effort to try and maintain a lie or a façade. When you put on multiple masks and behave differently with different people in order to feel accepted it won't take long before you get mentally and physically exhausted.

"You can't sustain being somebody you're not without repressing and suppressing yourself and eventually creating symptoms in some areas of your life to get you back to authenticity."

Living inauthentically for extended amounts of time can lead to stress, worry and eventually illness.

I suggest revising it a little bit...

To learn more about Dr Demartini's work and The Breakthrough Experience visit DrDemartini.com.

Visit confidentpreneur.com for the full video interview with Dr Demartini.