When a young Civil Service Commissioner named Theodore Roosevelt wanted to publicize his corruption-busting in 19th Century Washington, he couldn't turn to Twitter or Facebook. Instead, Roosevelt spent years cultivating elite political journalists who would cover him for the rest of his public career, bringing "Teddy" into the homes of millions of Americans.

The symbiotic relationship between Roosevelt and what became the White House Correspondents Association set the standard for how politicians talk to the public. The media became powerful gatekeepers of American civic awareness, deciding what the public heard and from whom they heard it. Presidential candidacies rose and fell on their ability to garner press (and voter) attention.

With the launch of Change Politics, the Roosevelt model is shifting. Voters no longer need to hope their interests are addressed in a televised debate. The power to ask questions directly to presidential candidates -- and for those candidates to share their messages directly with voters -- marks a fundamental shift in American political culture.

Change Politics is the only platform that provides tools for voters to engage directly with candidates on the issues they think are the important in the lead up to election day, and to connect with a network of the people they trust most to specifically source recommendations in the form of endorsements. It's a bold experiment in making democracy more democratic.

Since Change Politics launched on January 14, thousands of users have asked questions on topics often overlooked by network and cable news debates. Voters are letting candidates know their concerns and hopes for the United States, and major media outlets are following the discussions as a new kind of voter-centric political power.

Candidates from both political parties jumped at the chance to connect directly with voters, free from the shifting attention of political reporters or the strict format of a debate. Here's just a sample of what they've been up to over the past two weeks:

Democrats Hillary Clinton, Martin O'Malley and Bernie Sanders offered video and text responses to a question about universal preschool asked by voter E.J. Wallace. Then, after nearly 400 people asked about Super PACs, the campaigns tackled the influence of money in the political process. O'Malley even added a backing beat to his response:

Republicans are taking time to answer voter questions, too. Many of the candidates are using Change Politics to talk directly to their base, including Jeb Bush, Marco Rubio, Chris Christie, Carly Fiorina, Ben Carson and Mike Huckabee. When Lindsay Weiss submitted a video question urging the candidates to share their views on comprehensive tax reform, every Republican candidate directly addressed her concerns.

By taking action and building a coalition of supporters, Weiss became a major voice in the 2016 Republican Primary. As the role of moderators hits the headlines ahead of tonight's Republican debate, Weiss shows the promise of a democratic system for selecting questions from the people most affected by the actions of politicians. You are the debate moderator.

Throughout political history, individual voters never had much expectation that their concerns would get a hearing from some of the most powerful political leaders in the country. By empowering voters to become megaphones for their passions and hopes, a first-time voter from New Hampshire can now harness the power of her social network to become a power player in the presidential campaign. 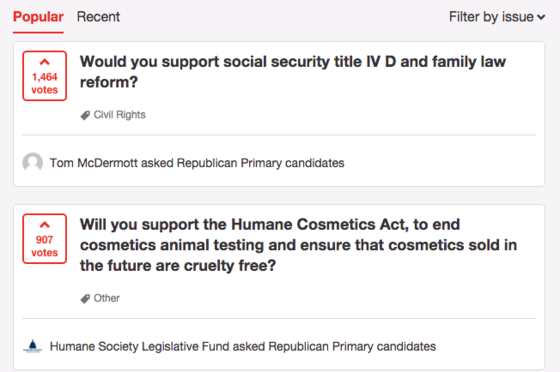 Under this new model, each citizen is both debate moderator and newspaper editor. By gathering friends and supporters who feel as they do, voters become influential civic voices in a presidential debate too often structured to pit candidates against each other on insubstantial issues. As a result, presidential candidates treat them with the respect and seriousness previously reserved for heavy-hitting political pundits from The Des Moines Register or The Washington Post. That's a historic shift.

Civic technology like Change Politics aims to better fulfill the promise of American democracy: that Americans, banding together to make their voices heard, should be every bit as influential and powerful in an election cycle as major media outlets, PACs or lobbyists.

If the booming response from the presidential field is any indication, that conversation is already going strong. Why not add your voice?