Marty Sklar's fifty-plus year career at Disney included writing speeches for Walt Disney himself.  He's the ultimate insider knowing the ins and outs of the Disney theme parks and their attractions.  Sklar's second book, titled One Little Spark: Mickey's Ten Commandments and the Road to Imagineering, was published in September 2015, and in it he shares key lessons learned while designing some of Disney's most iconic attractions - as well as ones that didn't quite hit the mark.  [Would you believe he puts Disneyland's Haunted Mansion in the goof category?]  For those who dream of joining the attraction designer ranks, Sklar's book also answers the oft repeated question, "How do I become a Walt Disney Imagineer?"  Continue reading as Disney Imagineering Legend Marty Sklar shares the hits and misses of the Disney Parks as well as insight from the hidden hallways of his fellow Walt Disney Imagineers. 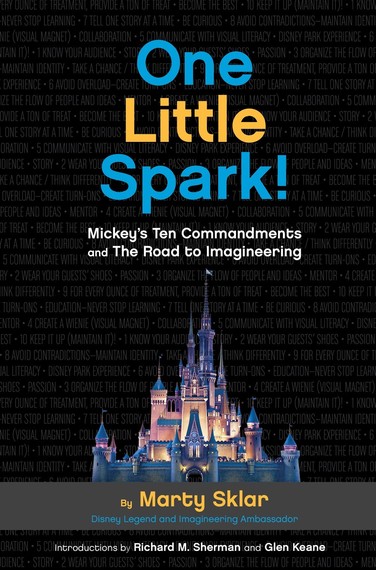 Over 54 years, Marty Sklar progressed from Staff Writer to Vice President of Concepts and Planning, and ultimately President of Walt Disney Imagineering.  He was directly involved in the design of many key Disney Park attractions including: The Enchanted Tiki Room, it's a small world, Carousel of Progress, and Space Mountain to name a few. 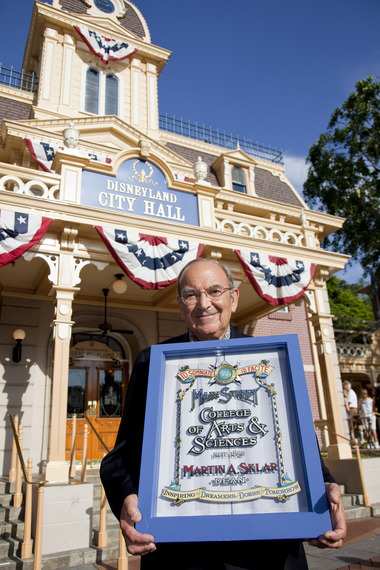 The title "One Little Spark: Mickey's Ten Commandments and the Road to Imagineering" comes from the Sherman Brothers song for the Journey Into Imagination attraction at Epcot, and Sklar chose the lyric as the title because he felt the song was the perfect anthem for Walt Disney Imagineering. 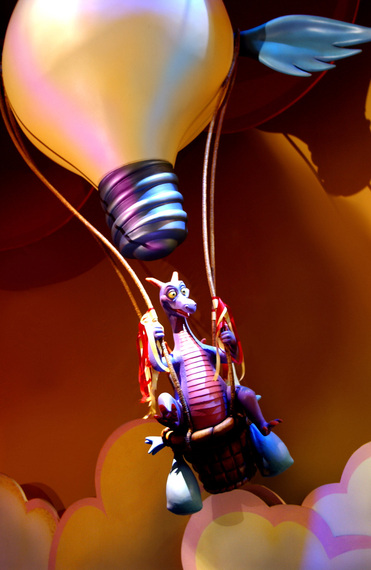 The first half of One Little Spark goes through "Mickey's Ten Commandments" - principles Marty Sklar and the Imagineering team picked up after decades of creating Disney park experiences.  Rules such as create a wienie (i.e., visual magnet), avoid overload, and wear your guests' shoes.  For each of Mickey's Ten Commandments, Sklar shares a theme park attraction representing the BEST illustration of the principle.  For example, Commandment #5 is "Communicate with Visual Literacy" - making use of nonverbal tools to communicate a story such as color, shape, form, and texture.  Marty added, "there's no better example of visual storytelling than Epcot's World Showcase, and with a glance at the Mexico or France pavilions guests instantly know what they're seeing." 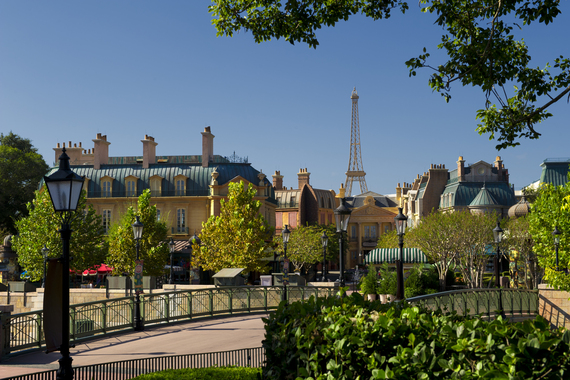 However, Sklar doesn't just give a Pixie-dusted recount of Imagineering's successes.  For each of Mickey's Ten Commandments, Sklar also shares an attraction that fell short of reaching the principle - termed "The Goof."  Marty was open and honest that not everything Imagineering did worked, "if you're not failing, you're not trying anything new," he said.  In the case of Commandment #5 "Visual Literacy," Sklar says Disneyland's Haunted Mansion is a "Goof."  It's not that Sklar thinks the Haunted Mansion is a bad attraction, but the exterior does not tell the guest what's inside - it's not consistent with the story.  "This mansion does not look haunted from the outside," Sklar shares, "that is a contradiction, but that's the way Walt [Disney] wanted it." 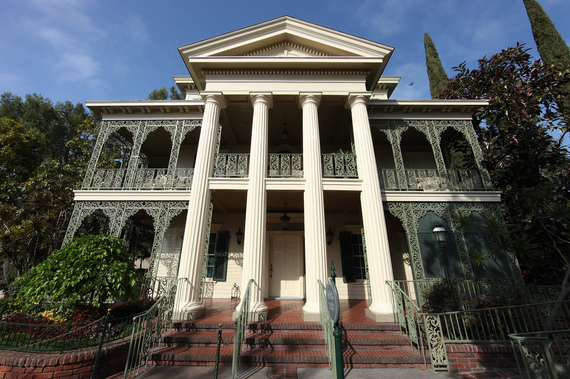 Sklar continues throughout the book to share examples of Imagineering Goofs such as Disney's Animal Kingdom's original, confusing entrance, as well as wins - Disney's Castles, the most ideal wienie (visual magnet) ever created.  Spoiler alert, Shanghai Disneyland's Enchanted Storybook Castle will be the largest and most elaborate Disney castle yet created when it opens in 2016. 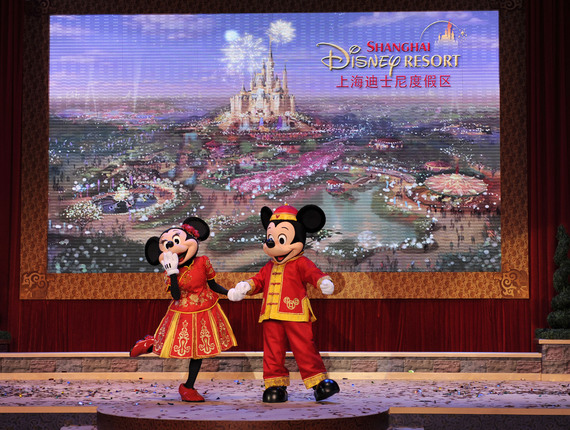 The second half of One Little Spark discusses "The Road to Imagineering" and what it takes to become a Walt Disney Imagineer.  For this section Marty not only offers his own advice, but the wisdom from many current, former, and legendary Imagineers.  It was important to get his colleagues' perspective because, "this book is how Imagineering does things," Sklar said, "not how I do things." 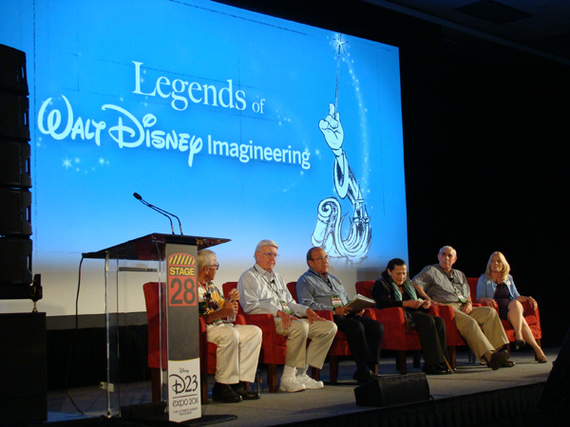 Marty asked his fellow Imagineers to share their path to Imagineering, and he received messages from 75 Imagineers as far away as Paris and Shanghai - offering to help guide future careers.  Sklar boiled their advice into categories such as: story, collaboration, and curiosity.  However, there was one principle that stood out as most important to becoming an Imagineer.  "Passion," Sklar replied, "love what you do, develop a passion for it, find what turns you on the most, and become the best at it." 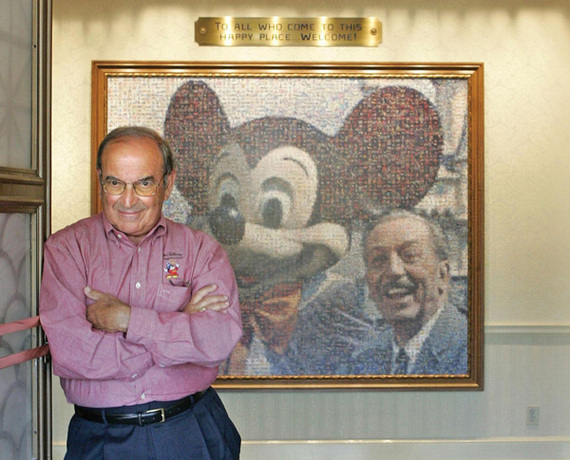 Coming from the only Disney employee who participated in the opening of each of the current 11 Disney Theme Parks worldwide, that's pretty good advice not just to become an Imagineer, but for life in general.  Marty Sklar's One Little Spark: Mickey's Ten Commandments and the Road to Imagineering, makes a great gift for any Disney fan.  Young people who aspire to create the rides, shows, and attractions of Disney's Magical Kingdoms will especially enjoy the book.  One Little Spark! is available now in hardback with 288 pages for $25.00.