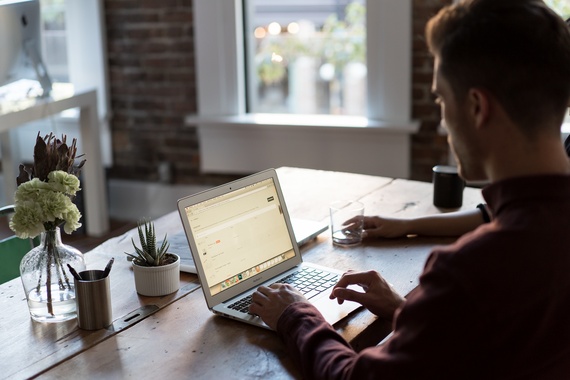 "In fact, it is a constitutive characteristic of being human that it always points, and is directed, to something other than itself." - Viktor Frankl

It was a bitter northern Colorado winter day last December. The kind of day on a college campus when students anxiously wait for that magical e-mail letting them know class is cancelled.

I parked my car and headed to teach class, the campus a barren bright white desert as windswept snow swirled across an almost-empty parking lot. As a trudged through the snow, I noticed one of the campus facilities workers on the opposite sidewalk clearing a path. He had gotten off his adapted backhoe and started manually and meticulously clearing a portion of the concrete.

As we made eye contact he stopped what he was doing and silently walked over to a piece of sidewalk about ten feet in front of me. Upon noticing me, he vigorously restarted his careful method of clearing every last bit of the snow.

He looked up and said, "How's it going today?"

"As long as I can keep these sidewalks clear for the students, I am a happy man!" he said, laughing hard to himself.

There was no supervisor there motivating him. There was no one even there (except me) to see and reward him for a job well done. Pay and benefits in that type of job are terrible. The task itself wasn't especially designed to be motivating. He probably didn't have a hand in crafting his job.

So, then, what was motivating him? Maybe a better question is: What was pulling him through the apparent drudgery of the work in the unforgiving weather?

The object of his behavior seemed to not be himself, not his paycheck, and not some reward or recognition. It seemed to be something greater - more powerful and fulfilling than the usual motivation suspects.

The higher purpose of his work - the university and the wellbeing of its students - was the object inspiring his exceptional work and apparent happiness.

It is this space between him and the purpose of the organization that workplaces need to be especially concerned with. This space, this energy, is characterized in the psychological literature as self-transcendence.

Inspiring it among your team can be transforming.

Why should we care?

If you are in your office right now, chances are that that at least one of the people in the offices on either side of you dislikes their job.

With 70 percent of Americans disengaged in their work and managers and leaders theorizing how to motivate a purpose-oriented millennial workforce, commitment and motivation bestsellers are in vogue.

The problem is that most of these books focus on things we can "do" to push employees and not the things we believe in that pull us and fellow employees toward something greater than ourselves.

We try to keep employees happy, not recognizing that happiness and wellbeing themselves are not sustainable objects of behavior. Rather, as Maslow and Frankl hypothesized, these are the side-effects of pursuing a meaning or calling greater than oneself.

Research supports this. For example, psychologists have found that when over 435 soon-to-be college graduates were surveyed, 68% of them indicated that a spiritual calling and sense of higher purpose at work was important to them. When over 370 employees were surveyed in the same study, 62% percent of them indicated that a connection to a higher purpose was a critical aspect of their work.

This is precisely why focusing on the psychological and spiritual notion of self-transcendence to a compelling higher organizational purpose is critical in the modern workplace.


"It is one of the immediate data of life experience that man is pushed by drives but pulled by meaning." - Viktor E. Frankl

There is a reason we have tow-trucks and not push-trucks. Basic physics tells us that when you push there is one component of force that adds to the weight of the body and hence there is more friction. When you pull the vertical component of force is against the weight of body and hence there is less overall friction. So it is easy to pull than push an object.

This elementary physics lesson provides an example of why most motivation tactics in our organizations ultimately fail or are short-lived. We are trying to push people by offering rewards, big salaries, and flashy perks. This is hard and expensive pushing! And, it almost always doesn't last.

Self-transcendence can best and most simply be defined as the phenomenon that occurs when one's behaviors are oriented toward an object outside of oneself. In the workplace, studies have shown that one of the most powerful objects of this behavior is a higher organizational purpose that serves society and others beyond the bounds of the organization.

In their book, Make Your Job a Calling, psychology professors Bryan Dik and Ryan Duffy found that when employees have a calling with a "transcendent summons" (that is, an outside object inspiring behaviors) "...they are more committed to their jobs and organizations, more intrinsically motivated and engaged, and more satisfied with their jobs."

By creating and fostering organizational cultures that are oriented toward a compelling global purpose, thereby inspiring a self-transcendence to this purpose, we can pull ourselves and fellow employees toward an inspiring higher calling.

And unlike a push, the pull never goes away.

In organizations with a deeply held and compelling higher organizational purpose, there is a constant striving to deliver the purpose.

That is why, I believe, in the bitter cold, that worker was meticulously clearing the sidewalk in front of me.

In this striving to deliver a purpose, happiness and satisfaction are then allowed to ensue - attitudes the American workforce could surely use right now.

This story originally appeared on PurposeSpeaks.com, a blog about purposeful living, leadership, and work.