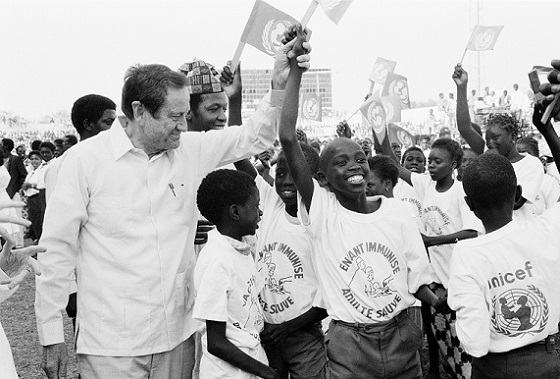 When the international community observes World Immunization Week in April, we will probably hear a lot about "closing the immunization gap."

Immunization is one of global health's greatest success stories, saving up to 3 million young lives every year. But deep disparities in coverage mean that as many as 1.5 million children die because they are not protected. The immunization gap is created by a host of factors: a lack of access to health care, prohibitively expensive vaccines, an inadequate supply, wars, a shortage of immunization data, lackluster political support, meager financial resources, illogical fears, and a dearth of knowledge about where to get vaccines.

How to overcome these formidable obstacles -- and how to close the immunization gap -- is the subject, year-in and year-out, of much debate and hand-wringing. As the world once again ponders this perennially vexing question, it's worth taking a step back and asking: what would Jim Grant do?

As the legendary head of UNICEF from 1980 to 1995, James Grant spurred a historic surge in childhood immunization rates and paved the way for much of the progress in recent years. Central to the "child survival revolution" he launched in the early '80s was a global immunization crusade -- a massive effort that involved millions of people and that led to unprecedented, head-spinning advances in vaccine coverage from China to Colombia to Bangladesh. Between 1980 and 1990, worldwide childhood immunization rates for six killer diseases rose from between 16 and 21 percent to nearly 80 percent.

Grant relentlessly shamed and coaxed dozens of leaders -- from enlightened statesmen to brutal tyrants -- into vaccinating their countries' children. In many cases, he and UNICEF representatives fueled a sense of competition, playing one country against another.

There were obstacles, of course, but Grant either knocked them over or went around them.

In 1985, he decided to push an immunization campaign in El Salvador. And what about the inconvenient fact of the country's vicious civil war? Grant's reply was simple: We stop the war.

He then tasked his Central America representative, a jovial Armenian-Lebanese man named Agop Kayayan, with arranging a truce that would allow El Salvador's children to be immunized. Working with the Catholic Church (a pivotal UNICEF partner), Kayayan, Grant and several others managed to broker a series of ceasefires. These so-called "Days of Tranquility" would be reprised year after year until the end of the war in 1992. Thousands of children likely lived as a result.

The "real heroes" -- as UNICEF Ambassador Audrey Hepburn would note -- were the government health workers and volunteers who administered the vaccines. Many had braved bombs and land mines, negotiated treacherous mountain passes, and risked gunfire and abduction. (In recent years, immunizers have been murdered with alarming frequency; a January attack at an immunization center in Pakistan left 15 people dead.)

In Grant's mind, the significance of the global immunization crusade went beyond vaccines, according to his friend and collaborator, Dr. Jon Rohde (an American pediatrician who was pivotal to the launching of the "child survival revolution). "Jim really wasn't about immunization," Rohde says. He "was about reaching everybody and then doing more."

Indeed, notes Rohde, the immunization campaign marked the first time a basic lifesaving service had been made available to so many on such a wide scale. "Never before in history had something been done for everybody," Rohde says.

Grant would use the immunization gains to justify a much broader assault on ill health and poverty. In 1990, at the World Summit for Children, he secured commitments from 159 governments to pursue 27 specific, time-bound goals on child survival, health, nutrition, education and protection. These targets would later inspire the UN's Millennium Development Goals.

Starting in 2000, after the Gates Foundation funded the creation of the Global Alliance on Vaccines and Immunization (GAVI), the sluggish immunization rates started to go up again. In recent years, there has been some notable progress, particularly in Africa.

But the immunization gap stubbornly persists. And the job is never finished: each and every year, 140 million babies enter this world -- they all need to be immunized.

Today, Grant's story has essentially been lost to history. Some people believe that had he lived another 10 years, the immunization gap would be a lot narrower than it is. A few suggest that polio might even have been eradicated by now.

A lot has changed since Grant died. There are new vaccines, new technologies, new conflicts, and many new players in the field of global health. So what can we still learn from the greatest immunization advocate in history?

First, and perhaps most importantly, we need another zealous vaccine champion. Someone who can stoke a renewed sense of urgency. Someone who can summon and sustain the political will to make sure global health's most effective tool reaches every child that needs it.

Second, build buy-in across a broad spectrum. Mobilize a "grand alliance" around one common goal: immunization.

Third, frame the fight for higher vaccine coverage as a fight to save children's lives. In the fierce competition for resources in global health, the needs of children can be eclipsed by a blizzard of other priorities. To close the immunization gap, saving children must be the end goal.

Lastly, be bold and audacious. Push the parameters of the possible.

Whatever happens -- or doesn't -- the spirit of Jim Grant will be watching.

Author, 'A Mighty Purpose: How Jim Grant Sold the World on Saving Its Children'