You're going to need to be a good 'wrestler". 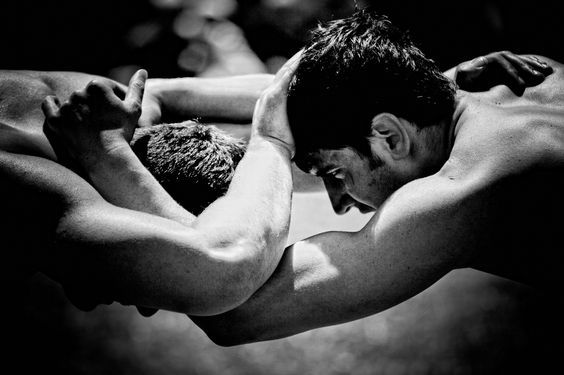 In order to really show up, be innovative, creative and connected at work we need a couple essential ingredients-

We all want to work in a culture that's energizing, healthy and thriving. We know how successful value based businesses can be, take Zappos for example.

In addition to operating by a set of vibrant values-the key to a healthy corporate culture is vulnerability.

Even operating based on values requires a certain level of vulnerability-it also requires courage.

That's where the 'wrestling' comes in.

There is never one without the other. We want to live courageous lives. We want to be innovative and creative, but vulnerability most of us would like to leave out.

There are places in our lives, perhaps at home, where we don't care as much about being vulnerable, but in other settings, like a professional context, that's a different matter.

Brené Brown in her book Daring Greatly-How the Courage to Be Vulnerable Transforms the Way We Live, Love, Parent and Lead defines vulnerability as "emotional exposure, risk and uncertainty"...gulp

For many of us we may armour up before heading off to work, limiting our vulnerability and at the same time our courage AND innovation and creativity - lock it all up and limit how we show up.

The flip side of vulnerability is that while we may not love the feeling of being exposed-it is the foundation of courage.

We love courage, we watch movies that celebrate the hero, we share posts on social media that talk about someone's perseverance despite tough circumstances. We love a fighter, an 'over comer'-however there's never been a non vulnerable hero.

We also marvel and celebrate the people and companies that develop new products and services. Nothing new was ever created without vulnerability.

Malcolm Gladwell in his book David and Goliath: Underdogs, Misfits and the Art of Battling Giants writes about how those that are willing to be vulnerable, whether it is a group or an individual, often achieve surprising victories.

There's never been a new product or service that's been created that didn't require vulnerability in the creative process. Computers seemed like a crazy idea when they were invented, people scoffed and laughed. Talk about exposure and talk about courage to persevere despite many challenges and set backs.

Seth Godin mentioned in a recent podcast with Tim Ferris, that he thought the World Wide Web was an idea that would not succeed-he laughs at that disbelief now, but imagine how vulnerable the creators of that initiative felt to be doubted and perhaps laughed at by others. However the courage to persevere and be with the discomfort of vulnerability has transformed how we now access online information.

Asking for help from a co-worker when you feel like you should be able to handle it.

Letting someone know that you're overwhelmed with the workload.

Asking to have something re explained to you when you feel like you should already know it but don't.

If you mess up, take responsibility and apologize.

People don't care so much that we make mistakes; the bigger issue is when we shirk the responsibility or blame someone else. We all overlook things, we are fallible, and we're vulnerable-own it, say sorry and move on.

Vulnerability is the courage to run with a new idea to explore possible new ways to tackle a current challenge-developing a new process or product.

Being willing to fail.

Seth Godin went on to say that he's failed way more than he's succeeded and he's very proud of that. You need to be a professional vulnerability and courage 'wrestler' to own that.

A friend relayed a story to me about getting a dismissive and flippant email from his leader about the perceived lack of effort the team was investing in order to close a deal. It was inaccurate and deflating.

Instead of writing off the comment or putting it into the 'bank of ongoing resentments', he decided to respectfully let the person know the impact of their comment.

That's vulnerability and courage-can't have one with out the other.

Vulnerability feels hard and it is. It's also the birthplace of connection, innovation and creativity. If you want your organization to thrive you need those aspects to create a great corporate culture and also to stand out amongst your competition and keep forging ahead in an ever evolving marketplace.

When you chose to live and work courageously, you're also choosing to be vulnerable.

Be willing to wrestle with and master both.