How do you define a leader?

It's a question I've been asking myself for years now and one I try to ask the CEOs, business owners and managers I come into contact with. (Notice I didn't say leaders I come in contact with. A title doesn't automatically confer leadership. Too often, it's a quality we take for granted, assuming that authority comes with a position.)

Type "leader definition" into Google and the result is what seems like a simple answer: "a person who leads or commands a group, organization or country." Merriam-Webster has a similar solution: "A person who has commanding authority or influence."

What's the common thread between these standard definitions? Commanding, a word with synonyms like imposing or controlling. In the commonly-held point of view, it seems like a leader is someone who makes his or her desires into reality by exerting force over others.

But is that true? 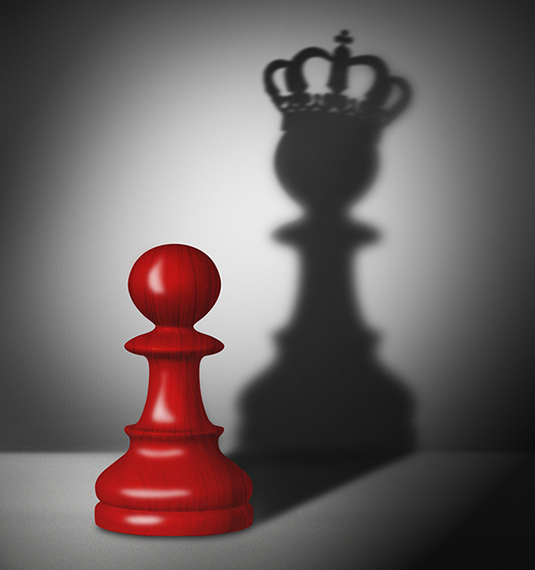 Most of us seem to associate the word "leader" with stereotypical personality traits such as charisma, dynamism, self-motivation and forcefulness. There's nothing wrong with any of these characteristics in and of themselves. Most successful leaders I have met exemplify some if not all of them. But just because these are the commonly thought of features, does that make them the best or definitive ones?

Between technological interconnection and social pressure, the world has been reshaped faster than we have yet been able to reshape ourselves. It has become deeply, irreversibly, interdependent. To adapt appropriately, we need to reconsider how we think about leaders and leadership. Today, there is a less obvious characteristic that is growing more important and consequential than it's ever been before.

The way we normally use the word, humility tends to suggest passivity. Humble people lower themselves to the will of others. They get passed by or stepped on. While this seems antithetical to our earlier definitions, neither one is true. Humility isn't a weakness. Humility is the heart of great leadership.

Humility comes from the Latin word "humus" meaning "ground, soil or earth." It is literally the condition of being grounded, of being "down to earth." It expresses being in touch with the soil, of a deep connection to the fundamental source of life, animation and growth. Far from diminishing one's authority, humility enlarges it.

Humility enables moral authority--"power through people"-- in the form of values-based, inspirational leadership. It takes humility to realize that ideals and shared values are greater and more enduring than any individual, especially the leader formally in charge.

There's still a tremendous need in both business and the world for power and authority. In fact, it's hard to imagine working in a world without any power or authority. The challenge is this: formal command-based authority is losing its potency. It's disappearing and dissipating, becoming so incorporeal that it cannot be hoarded any longer. Today's power must be harnessed and channeled. As the vacuum left by formal authority grows, the possibility and necessity for moral authority becomes even more pressing. We need new attributes for a new type of power. We need humble leaders, because humility is the cornerstone of moral authority.

In his groundbreaking study of the role of humility in leadership, leadership guru Jim Collins writes about Darwin E. Smith, the CEO of Kimberly-Clark from 1971 to 1991. Like Superman's alter-ego Clark Kent, Smith was known as shy, "mild-mannered" and unpretentious. He even doubted his own qualifications when he was elevated to CEO from the position of in-house lawyer. Throughout his tenure, he avoided personal publicity like a plague.

And yet, he was determined and fearless when it came to making difficult decisions and seeing them through. According to Collins, great leaders succeed "through a paradoxical combination of personal humility plus professional will."

Smith and his team determined that the company's traditional profit center, its manufacturing mills and coated paper products, were in a bad market with weak competitors. He sold all of the mills and reinvested the proceeds into the consumer paper business, which was then dominated by world-class competitors, Procter & Gamble and Scott Paper. Fast forward 25 years and Kimberly-Clark outperformed P&G in six of the eight product categories in which they competed.

Collins found that the very best leaders, with the very best results, are consistently modest. Eleven out of eleven of the companies that transitioned from "good to great" in his 1965-1995 study of 1435 Fortune 500 businesses, had leaders with the strong trait of humility. When discussing the accomplishments of their companies, these CEOs downplayed their own role and highlighted the contributions of the executives around them.

In the ten years since Collins' study appeared, the world has become even more hyper-connected and interdependent. Power is no longer exercised over people but through them. With leaders and the led increasingly standing on level ground, great leaders avoid autocratic behavior and instead, look to those around them as the engines of innovation and change. Today, humility isn't just a nice thing to have, it's necessary to thrive as a leader.

In a recent article in the Harvard Business Review about a study evaluating the key attributes executives desired in their CEOs, humility was the first trait listed. Highly regarded CEOs were six times more likely to be described as humble as their less well-regarded peers. Unfortunately, only one in four of the CEOs in the study were described by their executives as humble.

In another study by Catalyst, a nonprofit organization that expands opportunities for women in business, a global survey of 1,500 workers revealed that when employees perceived altruism and selfless behavior in managers, they were more likely to "feel included" in work. The more included workers felt, the more innovative they were in their jobs, suggesting new ideas, and "going beyond the call of duty" to meet workplace objectives.

Humility is the opposite of weakness. When a leader is willingly vulnerable and exposes his or her humanity, they create a culture in which employees willingly contribute their own humanity, offering up capacities for collaboration, communication and passion.

By contrast, leaders with outsized egos and grandiose visions may be productive in the short term, but they almost inevitably ignore the advice of their followers, even when they're driving their companies straight off a cliff. The famously egotistical Al Dunlap ran Scott Paper for 19 months, overlapping with Smith's long tenure at Kimberly-Clark. Dunlap's decisions slashed Scott Paper into a shadow of its former self, before he eventually sold off the company to Smith. Arrogant, egotistical leaders lack listening skills, empathy, and cannot embrace the collaboration and mentorship of the next generation of leaders. Despite their forcefulness, they're missing the attributes of a great, humble, leader.

Humility is all about your disposition and stance. A humble person can still have a swagger. He or she can still celebrate victory. Humbleness does not mean false modesty. It means a more inclusive approach to leadership.

How can leaders start down this more productive road, relinquishing formal "do it because I'm the boss" authority for the moral authority of a humble leader?

Henry David Thoreau once said that, "Humility, like darkness reveals the heavenly lights." Humble leaders contract, make themselves small, and give others the chance to rise to the occasion. By letting your people shine, you engender an inspired and enlisted workforce, committed to a collective mission that promotes greater success for your company as a whole.

Humility is a sign of deep personal strength, self-possession and resolve. It takes a strong person to let others take the reins and trust them to do what is right. When leading by example creates a culture that inspires engagement, you are no longer just leading employees. You are a leader among a team of leaders, working together to accomplish much more than any one individual with a title could ever hope for.